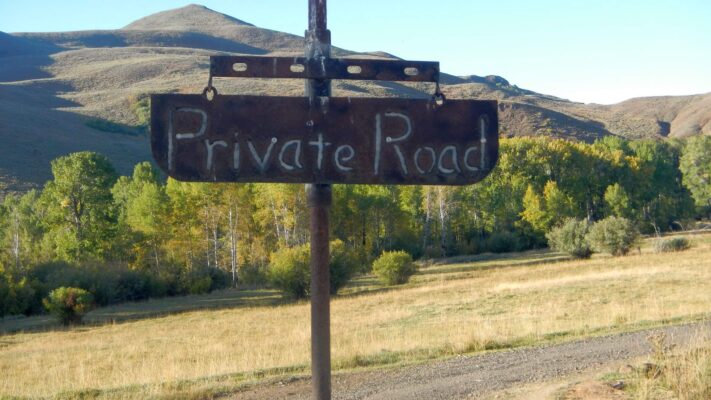 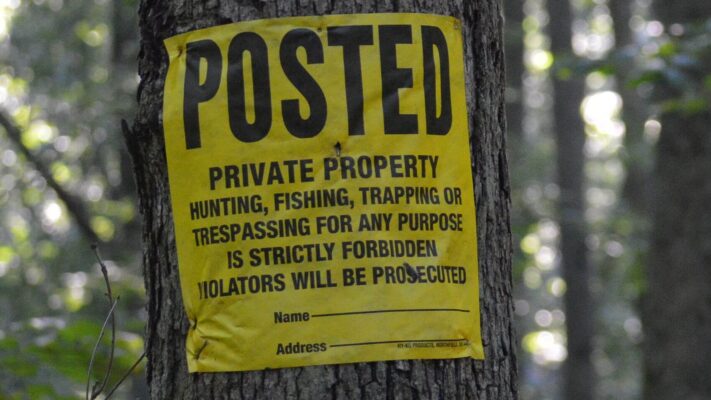 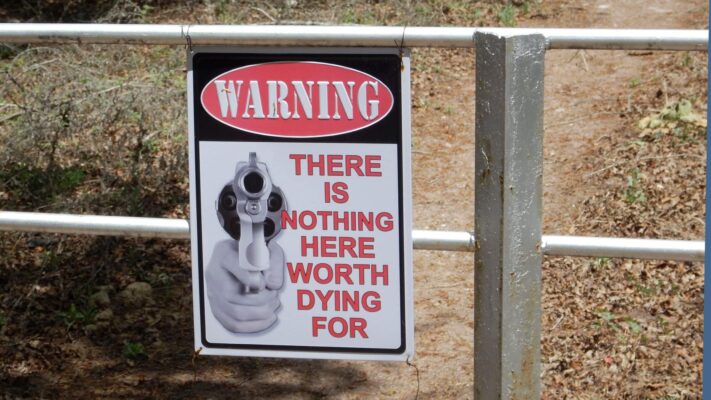 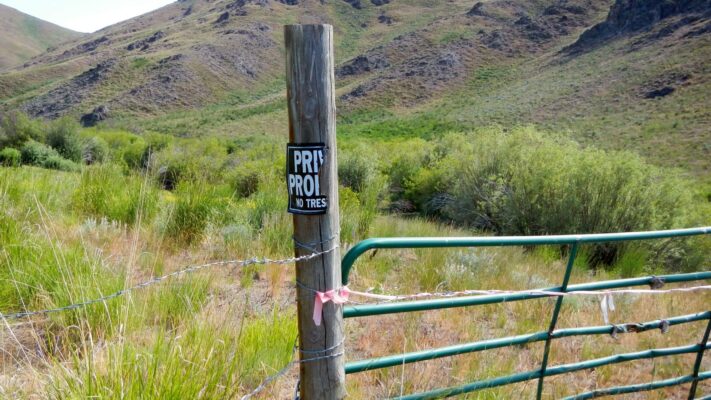 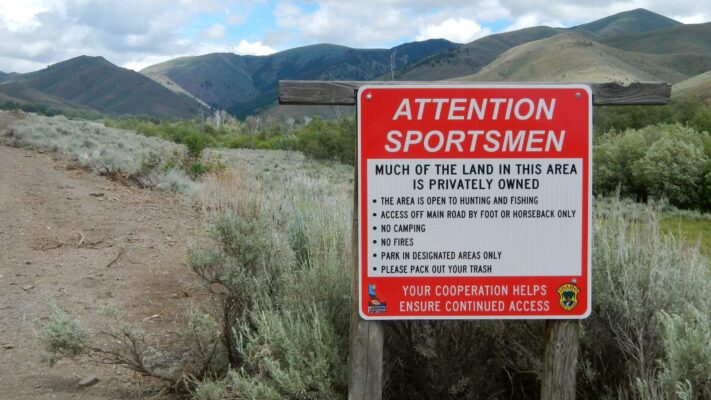 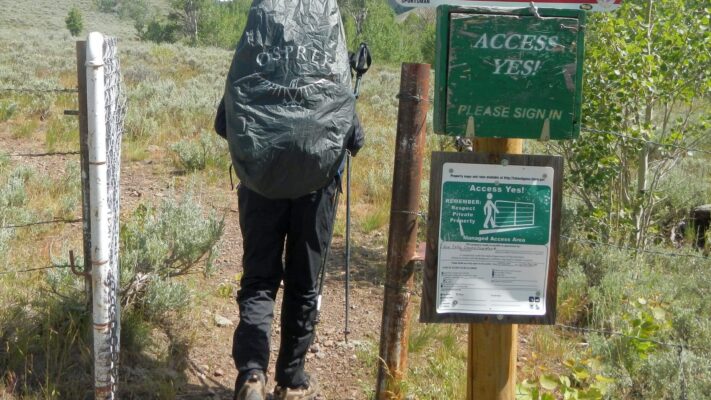 We try to stick with public lands on our hikes; private land often spells trouble.

In the 1980s, a week-long backpacking trip on national forest land in Colorado’s San Juan Mountains ended abruptly at a landowner fence.

On a 1990s trip to East Humboldt Wilderness in Nevada, we found all westside access trails (shown on topographic and national forest maps) cut off by ranches built to benefit from water from national forest mountains. Entering via public road on northeast side, we hiked a contour trail shown to link up these westside canyons—it was not maintained and we ended up hiking straight over the rugged ridge instead of looping around as planned.

On a 2014 hike in Shenandoah National Park in Virginia, we tried to link up two parallel canyon trails on park land separated by small sections of private land and a county road. We left our vehicle at a popular trailhead accessed by road through private ranches with National Park Service easement. After climbing the scenic canyon to Appalachian and park trails on the Blue Ridge, we dropped down second canyon on park trail ending at private property marked with red “no trespassing” signs. We didn’t want to trespass, but map showed only two-thirds mile down to public road for a loop back to our vehicle. Too steep to contour along the Park boundary. We took a cow route across green pastures—and were seen on the hill above by the farmer as we dropped towards county road. He overtook us on his ATV and gave us an angry lecture. “Don’t you people have any respect for private property?” No use discussing public access, easements, and recreational loop hiking.

In the middle of a 2017 trip to Blue Range Primitive Area in northeast Arizona, the national forest (NF) trail ended abruptly on private property—one of several holdings on the Blue River. Right past the Forest Service trail sign, a wire gate, buildings, vehicles, but no people. We hiked past the buildings and climbed over a metal gate. On the other side was a sign with a gun pointing out: “There is nothing here worth dying for.” Glad no one was home.

In the 1600s, economist John Locke argued property was “a “natural right” from God and advanced a theory that if someone occupied and worked the land, he became entitled to ownership. Some U.S. laws might be based on this notion. Homestead Act of 1862 provided 160 acres of land to settlers in exchange for a small filing fee and five years of residence/labor. The Mining Act of 1872 allowed mining claims on public domain land subject to yearly work on the claim. Many Western ranches started with the land grants. The Blue Range private property (mentioned above) that we crossed originally was public domain land occupied illegally by settlers at turn of the 20th century who eventually got it as a grant from the government.

I feel awkward when I encounter private property that benefits from adjacent public land but is closed to the public—like a recent trek this year through the Pioneer Mountains in Idaho. We had left national forest land and had to cross a small section of creek on a private ranch to reach public land on the hillside half a mile away. (Muldoon Creek, which flowed from the national forest, was used by the private ranch for irrigation and for grazing cattle in its riparian area). The rancher told us to get off his land.

Legally, he was right. The Idaho Trespass Law of 2018 requires members of public accessing private land for hunting, fishing, or other purposes to acquire permission or incur fines starting at $300. As one boon for the public, Idaho Fish and Game Department has an Access Yes! program that compensates landowners to allow non-motorized public access. It’s a limited voluntary program with onus on the public to check with landowners, many who are hard to contact.

On the recent Pioneer trek, we also enjoyed good private land stewardship. After the trespass incident, we spent three days mostly on private land managed by two large landholdings, all within Access Yes! We hiked old jeep roads along willow-lined creeks, over ridges overviewing vast valleys, and up a beautiful canyon with Douglas-fir groves. One of the landowners has initiated conservation easements on several thousands of acres (limiting use to protect conservation values) and also funds ecological research and a non-profit organization that helps protect livestock from predators with non-lethal methods.

Cultural Christian Europeans who usurped North American land from the Native Americans, perhaps interpreted Genesis 1:26 (King James Version) in the Bible where God gave humans “dominion” as “ruling over” or doing what you please. A lengthy article on Christian responsibility towards creation points out this primitive “dominion” view has fostered and is blamed for many modern environmental ills. However, the Bible’s teaching on the earth, nature and God may be quite different than this earlier interpretation. Dominion, for instance, could mean a “transferred right”— people bear the image of God and must rule on behalf of God. They do not rule in their own right—they must reflect the attitude that God has toward his creation. Genesis 1:31 indicates God called all He made “very good” and that He still owns it. “All the earth is Mine.” (Exodus 19:5).

Perhaps we should also reexamine Biblical teaching about land ownership. In the Book of Deuteronomy, God told His Jewish people that every 50 years all land sales reverted back to original owner. This Jubilee had interesting economic, management, and stewardship ramifications since all land sales and management activity was inherently prorated to 50-year cycles; there was little incentive to accumulate massive amounts of land as some wealth investment. Land was viewed as available for human use for a time period, not a long-term lock-up or investment to reap vast profits.

Although I am not a fan of private property as a recreationist, I might have some of the same territorial instincts as the Pioneers rancher we encountered. We once owned a house with a big yard in a northern Utah. Our yard was a shortcut for neighborhoods to a church and school across the street, with an opening through our fence and a path through our yard. I was annoyed to see kids and even adults in Sunday best trespassing “my” territory.

To sum up these rambling observations:

Perhaps if we saw land stewardship as a sacred responsibility, and land as something on loan from the Creator, it might change how we manage, use, or share it. Even with trespassing neighbors.