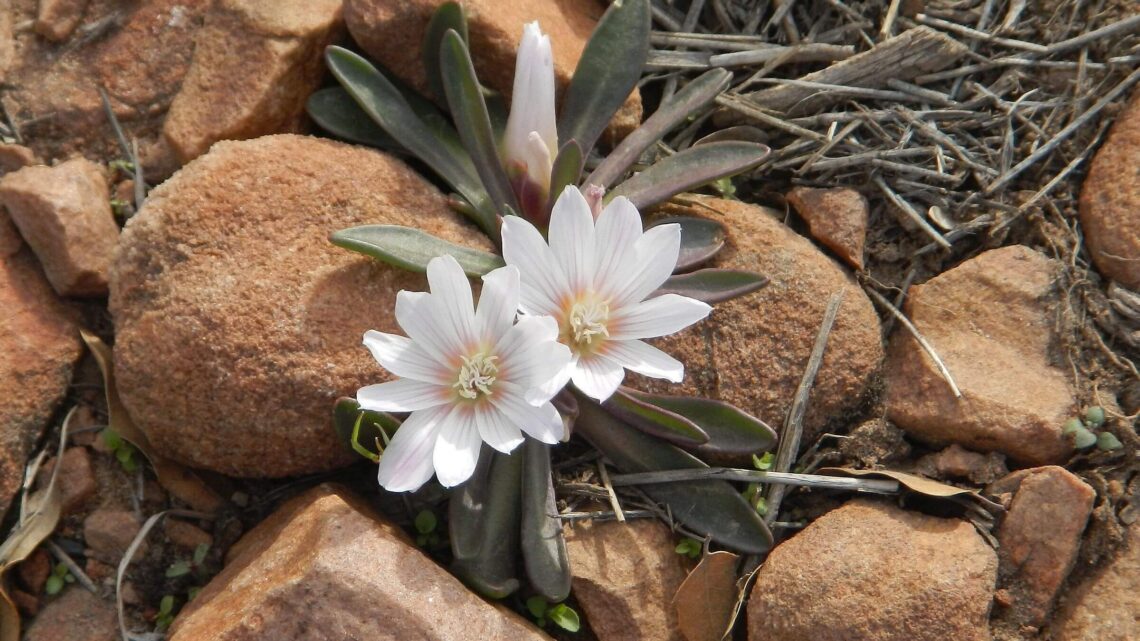 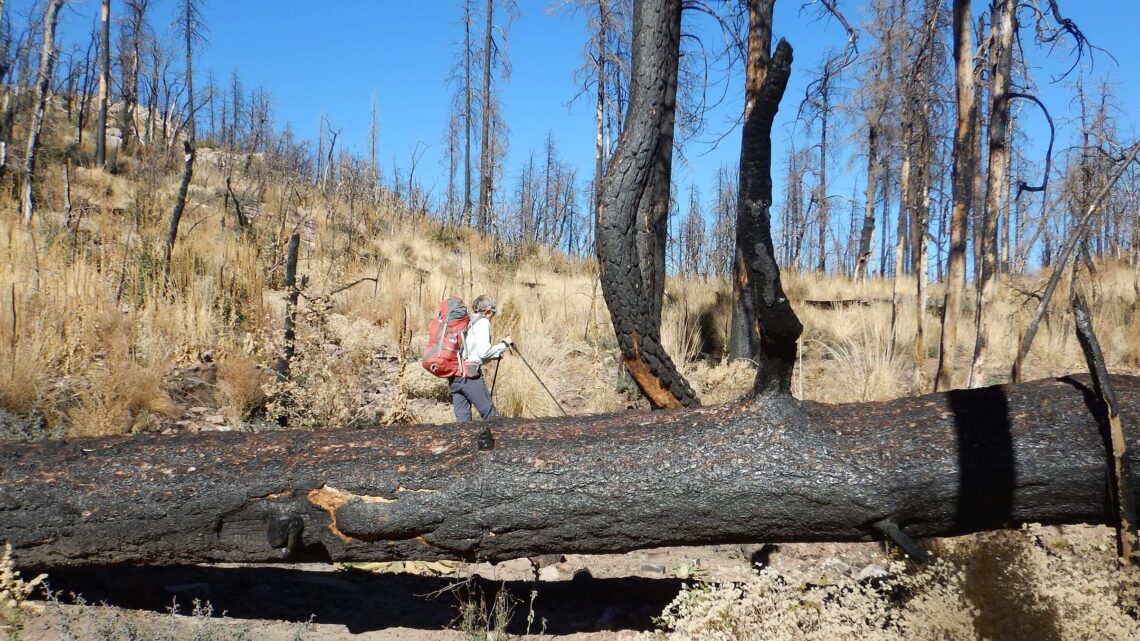 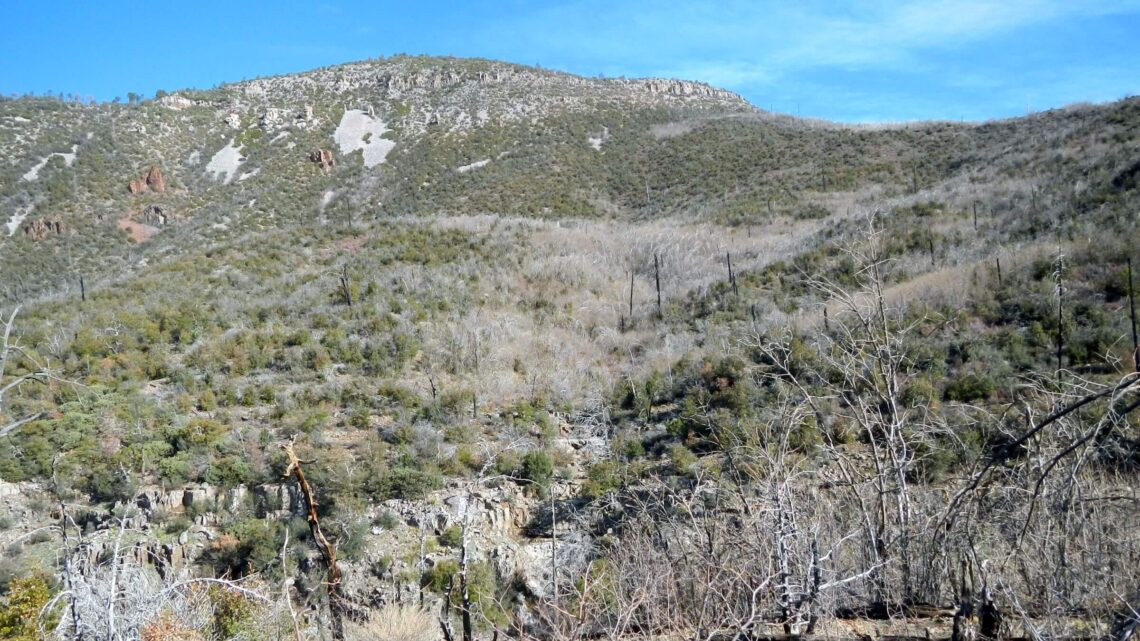 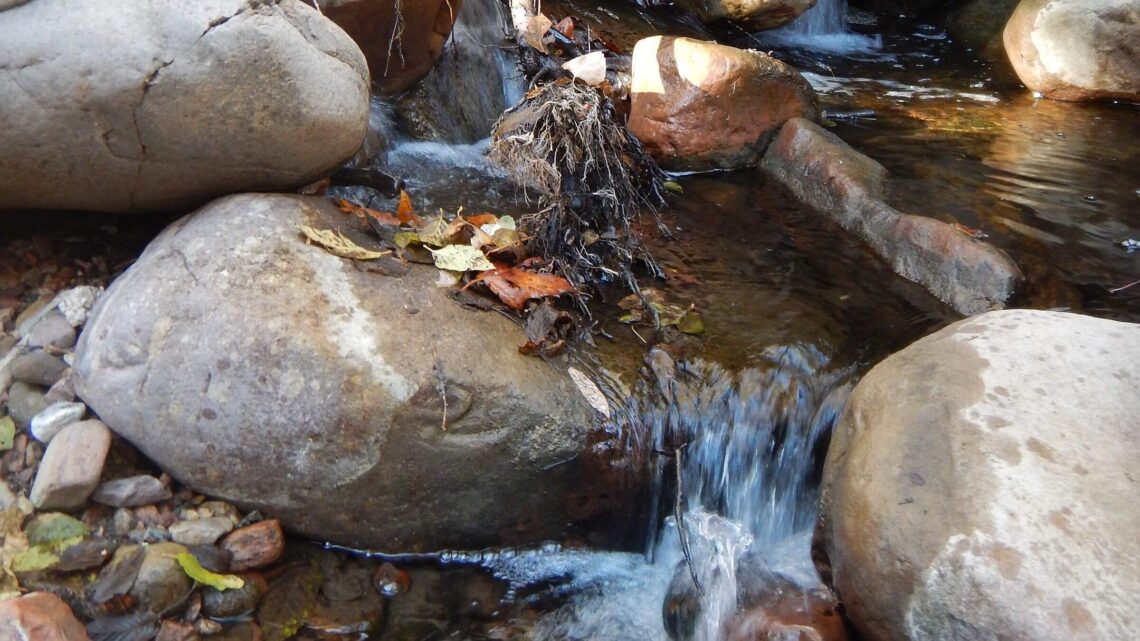 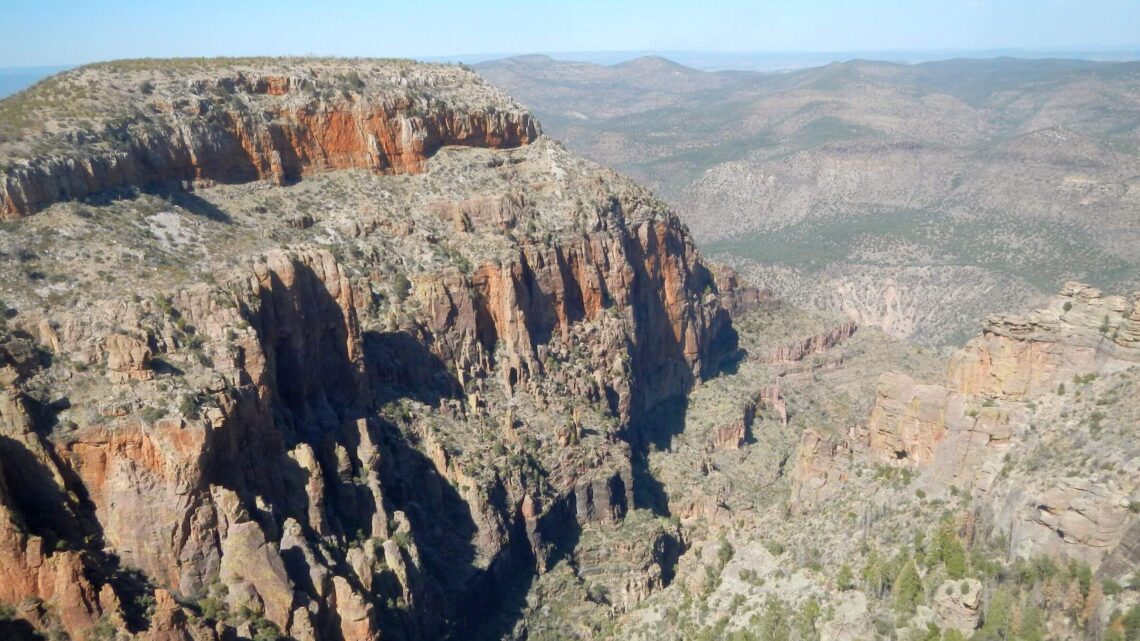 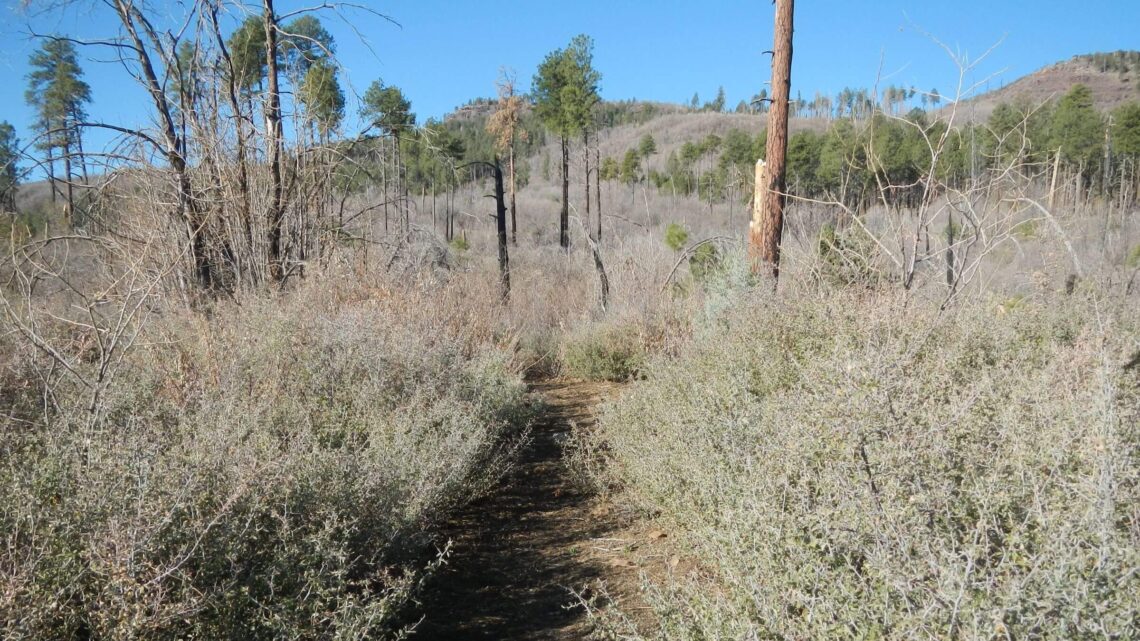 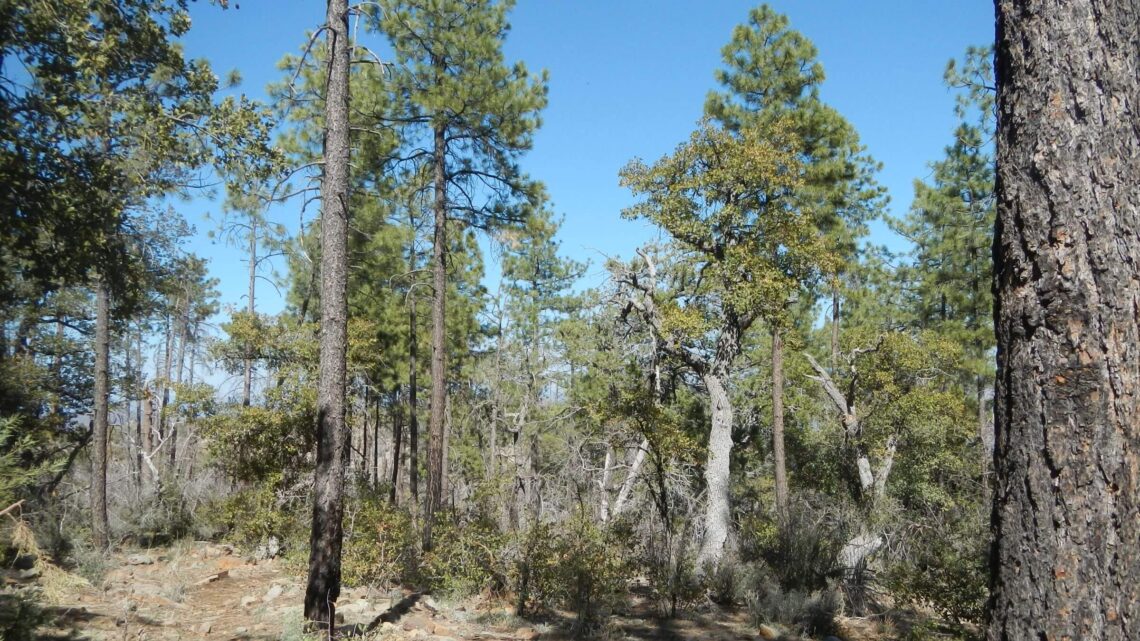 I have vague memories of a 1975 overnight trip with University of Arizona friends to the Sierra Ancha Wilderness in central Arizona: a long drive on backroads, short hike through a clearing marked by “Sierra Ancha Experimental Forest” sign, a wilderness register (where a hiking buddy marked our names under “pack animals”), a rocky rim trail through juniper and pine, and camp on the edge of a vast canyon on a stormy night.

Next morning, we wound around head a of steep red-rock canyon and traversed rimrock right into an intact cliff dwelling crouched above sheer cliffs on a rock ledge. Granaries with old corn cobs and clay brick dwellings with doors designed for shorter inhabitants. Hiking back along the canyon rims, I viewed mountain slopes cloaked in vast pine forest.

More than 40 years later, we made four visits trying to repeat that 1975 trip and find our way to the dwellings from a rim access. (Sierra Ancha cliff dwellings are famous and well-posted but are visited by scrambling up canyons from Cherry Creek below; we found no post mention a route from the rim). Overall a remote, spectacular, and little visited wilderness greatly changed by fire.

Our first visit was overnight visit in December 2017 to check out Hunt Spring. It was a dry year and visitor information was lacking from the Forest Service. We drove from Phoenix, parked in afternoon on Workman Creek Road (FR 487) just below a gate marked on map as sometimes locked (it wasn’t but road was very poor at that point). We hiked road to Moody Point Trailhead and camped in remnant pines in wilderness. Next morning, we found ample water at Hunt Spring but lost northbound Rim Trail in thicket of post-fire New Mexican locust. We hiked rim trail south, returned to check out Aztec Peak, with evening hike to our vehicle on road jammed with Universal Terrain Vehicles and echoing gunshots from a December elk hunt—the only time we saw people in this remote area.

Just a few days later, we saw no one as we looped the wilderness down and around on eroded, brushy, fire-damaged trails. Slowed by poor trails, we ran out of time to hike entire Rim Trail.

After finally deciphering our 1975 trip route, we returned to do it February 2019 but were thwarted by icy snow. After a cold camp on top, we looped back to vehicle on roads—to finish Cindy’s “birthday trip” in nearby warmer Superstition Wilderness.

Our most recent visit in April 2021 finally hiked Rim Trail to its end—aided by recent trail work (locust cut way back from Hunt Spring to north) and past reconnaissance efforts. But we found no route into the steep canyons or cliff dwellings below—perhaps obliterated by fires, little use and/or faulty memories.

Sierra Ancha Wilderness, 20,850 acres of plateau and steep-walled canyons dropping into Cherry Creek and the Salt River. Meaning “broad range” in Spanish, it perches below the Mogollon Rim about 40 miles northeast of Globe. Named Primitive Area in 1933, it became wilderness in the original 1964 Act. Elevations range from 4000 to 7000 feet. A fire lookout on Aztec Peak, at 7,694 feet highest point and outside wilderness, is visible from the Rim Trail.
Sierra Ancha Experimental Forest initiated in 1925 for watershed research encompasses 13,500 acres west of the wilderness; old buildings and water installations are visible from South Fork Parker Canyon Trail accessing wilderness. This is project includes some of the oldest recorded watershed and vegetation data in Arizona.
Cliff dwellings along canyon walls, thought to be inhabited by the Salado people from 1200 to 1350 AD, are best-known feature. Visitors scramble up canyons from Cherry Creek Road. Treat artifacts with respect.
The Coon Creek Fire of 2000 burned all but north and south end of the wilderness; the larger Juniper Fire of 2016 reburned much of the Coon perimeter plus north end. Numerous ponderosa pine forests have been reduced to remnant stands and falling snags; other fire effects are erosion, loss of many springs and explosive growth of thorny Ceanothus and New Mexican locust.
An extensive trail system was severely impacted although the Rim Trail, Murphy Trail and upper section of Moody Point Trail have been cleared, while Reynolds, Center Mountain and Lucky Strike trails are passable. Best access is South Fork Parker Creek Trail from Arizona SR 288.
We found water in most springs in our visits (see map and campsite photos for details). Because spring flow relates to overall watershed conditions, U.S. Geological Survey real-time water gauges at South Fork Parker Creek and Cherry Creek can be for used to decide water availability by comparing current flows (for your planned visit) to that of our historical visits (for Parker Creek, our 2017 visit had a flow 70% of normal and 2021 visit was 50% of normal; Cherry Creek flow in 2017 was 65% of normal).
Visit statistics (for 2 trips combined): 9 days, 76 miles, at 1.8 mph, and 475 feet per mile average elevation change.
Go to map below for more information on trailheads, daily routes, mileages, elevation changes, and photos. (Click on white box in upper right corner to expand map and show legend with NAVIGATION INSTRUCTIONS.)

2017 Visit: loop around a fire-scarred wilderness

Our 2017 return to the Sierra Ancha toured fire-damaged landscape that required about 6 days to hike only 51 miles. Eroded old trails and jeep roads through already rugged terrain were slippery, hard on feet, and often clogged with thorny brush we had to clip our way through.

Burned by the 9,000-acre Coon Creek Fire in 2000 and the 32,000-acre Juniper Fire in 2016, the area retained only remnant stands of pine. The older burn stimulated dense New Mexican locust now 6 to 10 feet-tall saplings in the higher elevations while dryer/lower elevations were dominated by Ceanothus and oak species. However, reburn by the newer fire seemed to simulate more locust branching, almost impenetrable vegetation with vicious thorns. Ceanothus (also thorny) and oak brush was somewhat opened up by Juniper fire but again nearly impenetrable (with sharp pointy leaf margins on Palmer’s and turbinella species) in areas burned only by Coon Creek Fire.

We started and ended at South Fork Parker Creek Trail west of the wilderness, hiking northeast on the Rim Trail, down Moody Point Trail to Cherry Creek, hiking road outside wilderness then back into wilderness and up to rim on old jeep road and trails.

A trailhead sign at Parker noted maintenance by Mesa Boy Scouts Troop 954, who apparently cut logs and brush and built large cairns (stone markers) on Parker and Rim trails (however as of this 2021 posting this troop no longer exists). We lost trail only once in a locust thicket. After camp at Moody Point, we took 10 hours to skitter, thrash brush and route-find 6.7 miles of trail to Cherry Creek; only respite was views of unburned pine forest to south with swath of old jeep road climbing hill to drop into Bull Canyon.

Cherry Creek, lined with golden cottonwood, was running well. We saw a lot of cows but encountered no people. Side canyons emptying into Cherry Creek also ran well. We hiked back up into wilderness through moonscape with some remnant pine via Lucky Strike, Center Mountain and Reynolds trails.

We came up near the old Murphy Ranch (sign now marked Haldihy Ranch), dropped packs and descended 900 feet on Murphy Ranch Trail through severe burn. We did not find Rim Trail junction south but hiked good trail north around red cliffs of Cold Springs Canyon. Here we turned back, out of time, short of Pueblo Canyon, trail’s end and hoped for route to the dwellings. We clambered up, took road up Aztec Peak and dropped down “Abbey’s Way” trail (named for late author Edward Abbey who worked at the lookout)—trail another burn victim. We clipped our way through locust and raspberry and camped in a field near a weather station.

Hiking road to Carr Trailhead and back to Rim/Parker trails the next morning, we figured out our 1975 hike route. Our group had driven up Workman Creek Road (FR487) to an Experimental Forest parking area; the field we camped in was probably associated with an old watershed project. We somehow accessed Rim Trail with campout on rim, morning visit to the ruins, and a hike back out.

We found South Fork Parker Creek more clogged with post-fire weeds, but most burned logs cut out. Half mile up trail we met a couple day hiking, the only people we saw until end of our trip.

We started mid-afternoon, camping at Dixon Saddle in the pines with a short trek on fire-damaged route contouring to Rock Spring (some pools) at head of South Fork Parker Creek; route continued towards next ridge, but was getting dark so we turned back. The next morning, we found Rim Trail in best shape ever; with more logs and brush cut, although we again lost trail near the same New Mexican locust thicket that troubled us in 2017; this time we missed a cut-out reroute. Tracks indicated horses had done part of our loop and a hiker had come south on the Rim Trail.

We temporarily lost the trail near Hunt Spring (where we stopped for breakfast) but followed a wildlife route from spring which reconnected to Rim Trail coming in above us (probably a reroute to avoid all the down logs just above spring on “map” trail). From there it was quite good, with wide path cut through locust and large cairns.

At the junction with Murphy Ranch Trail, we saw a small “Rim Trail” sign we had not noticed in 2017 (or else it was not there). We dropped backpacks at Cold Spring Canyon (to get water on return) and continued to signed junction for Pueblo Canyon and Edwards Spring. The first ended at overlook above looming red cliffs of the canyon. But we found no route down. Edwards was a marshy elk wallow with nice camp area in trees. Maybe next time. We returned to our packs, filtered water at a lovely spring, and camped on lightly burned pine-juniper flats above Cold Springs Canyon.

Next day we did climb up Murphy Ranch Trail, followed road to Carr Trailhead and down steep connecting trail (locust and Ceanothus were a bit worse) to Rim Trail, then back to trailhead. No one on road. At Dixon Saddle we saw our third day hiker. He said a “guy from the Sierra Club” was cutting logs below. Further down we met the cutter taking on a large, burned log with wedges, a small saw, hatchet and a one-person cross-cut saw. He said he and his friends had been cutting many of the logs on the trails including a huge-blackened juniper or oak that we had to crawl over in 2017. “That one took several hours for two of us,” he added.

Sierra Ancha trail angels are no longer Boy Scouts but Sierra Club and a foundation-funded watershed effort. The sawyer we met in Parker Canyon was Jim Vaaler, wilderness/outings chair for the Sierra Club Palo Verde group. He has single-handedly cleared much of the Parker/Rim trail during 2020 pandemic year. In addition—the National Forest Foundation—chartered by Congress to assist national forest projects, worked with Arizona Department of Environmental Quality and others to fund 46 miles of trail restoration in the Sierra Ancha Wilderness. American Conservation Experience and Arizona Conservation Corps did the trail work in 2018-19, aimed to reduce post fire sedimentation into the Salt River and Roosevelt Reservoir. So, most trails are probably much better and faster to hike than we found for our challenging 2017 visit.

Downloads (to be updated)