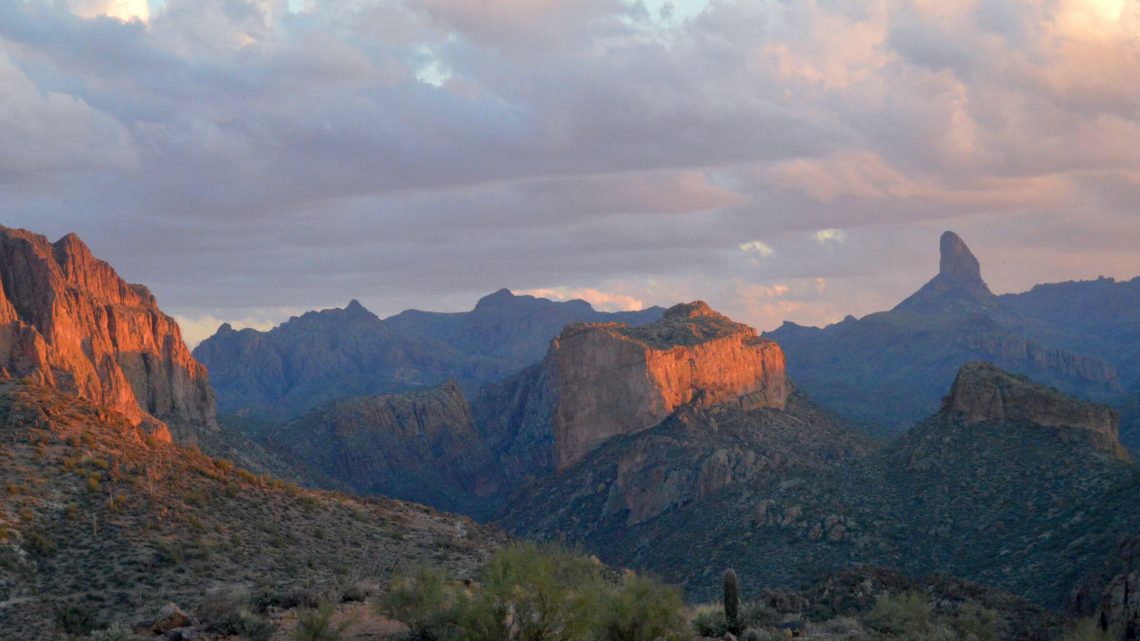 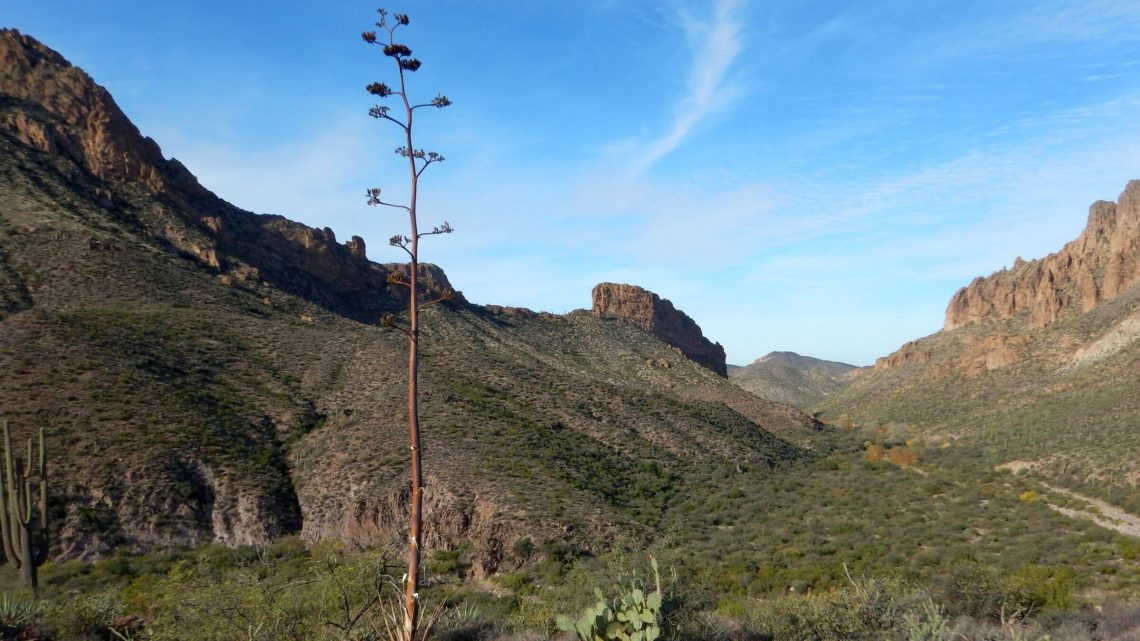 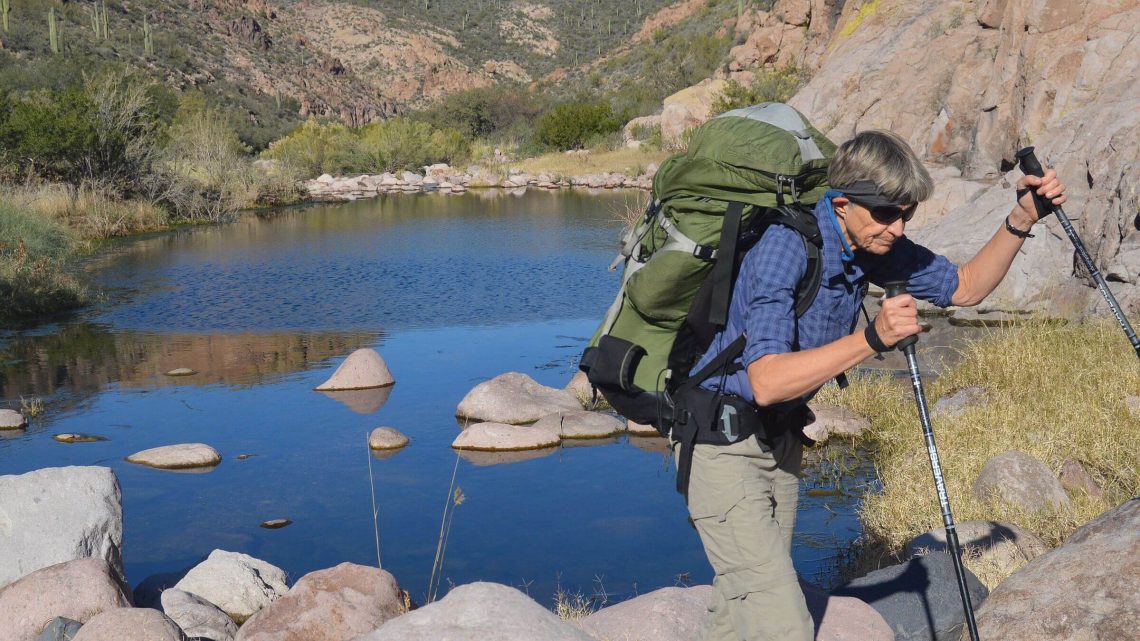 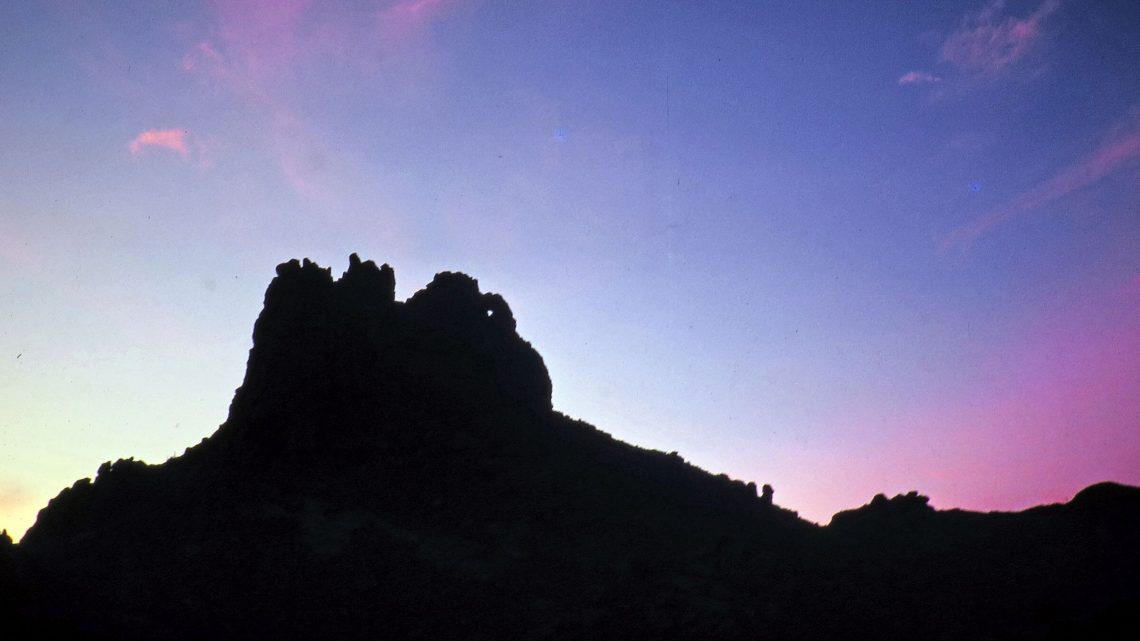 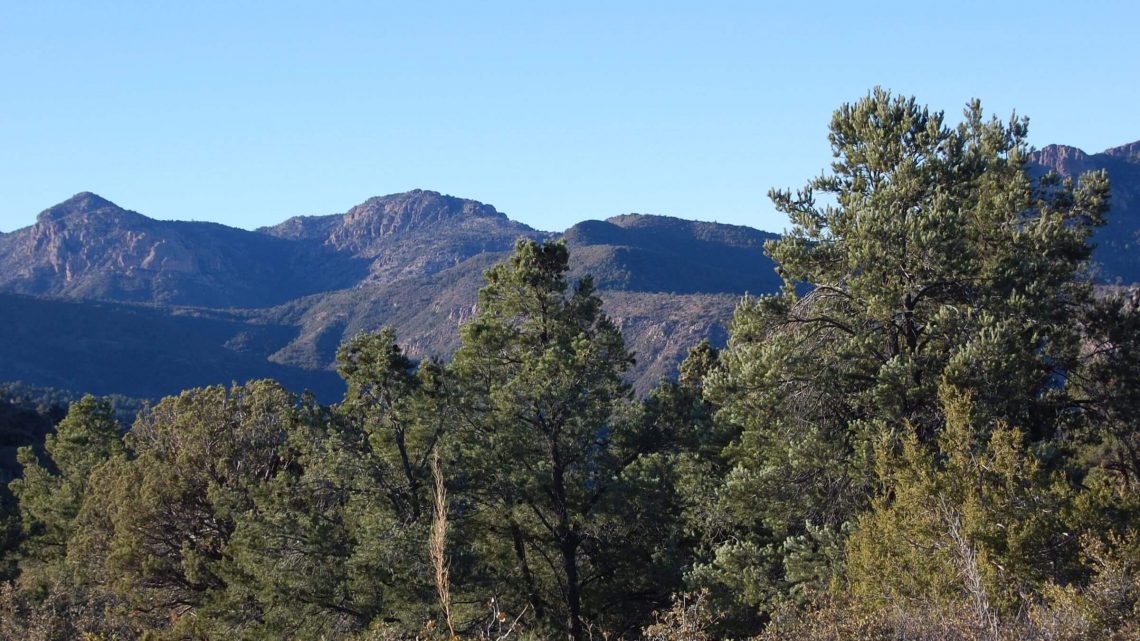 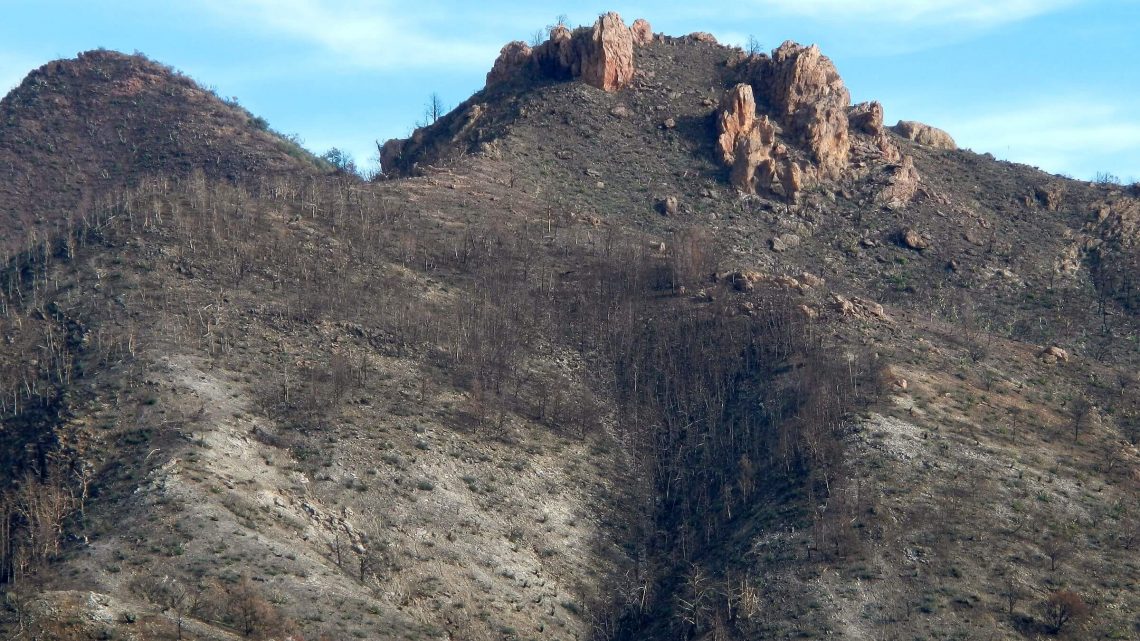 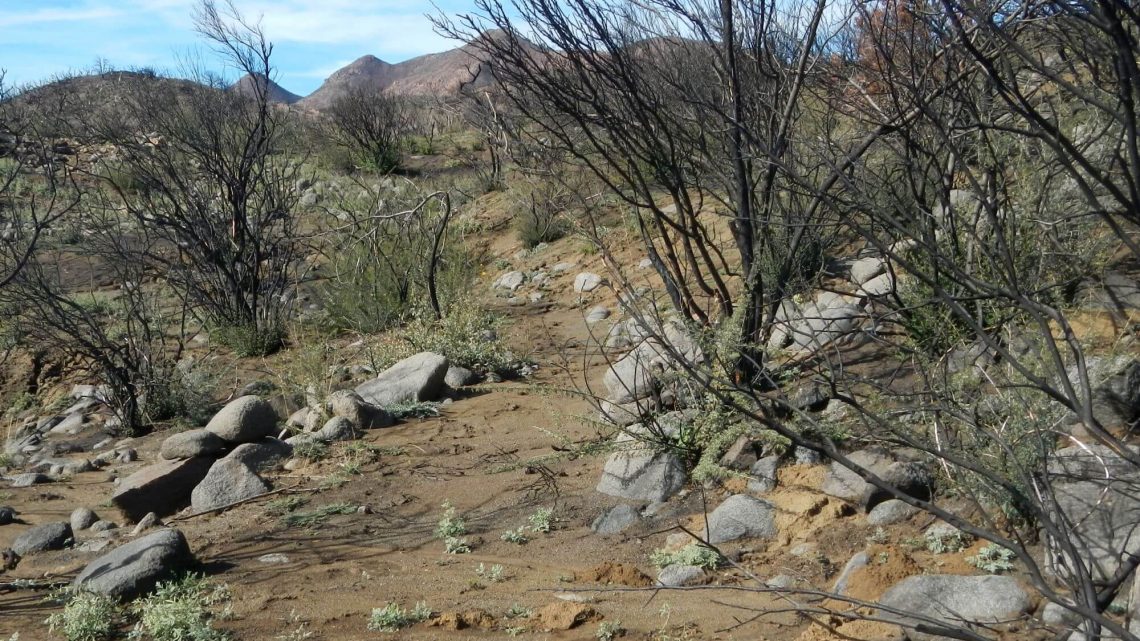 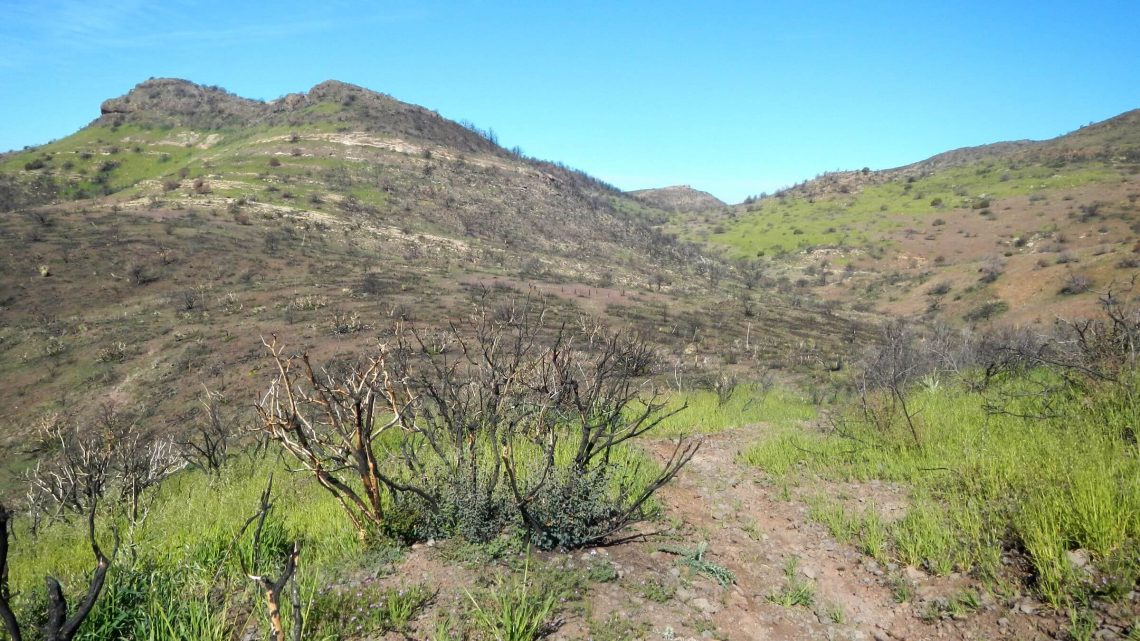 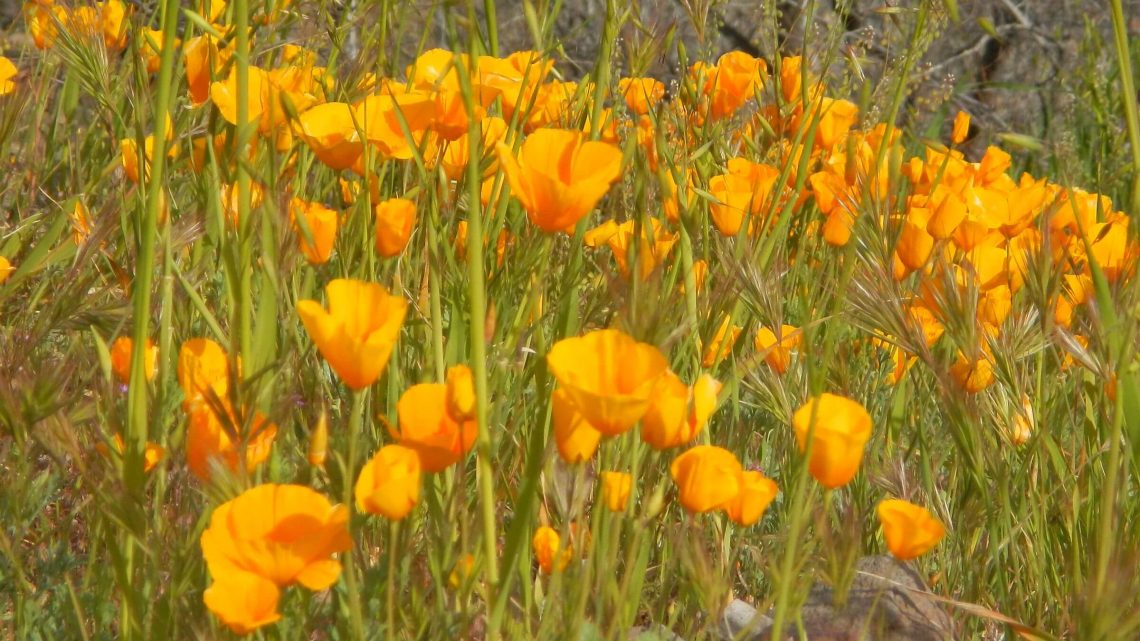 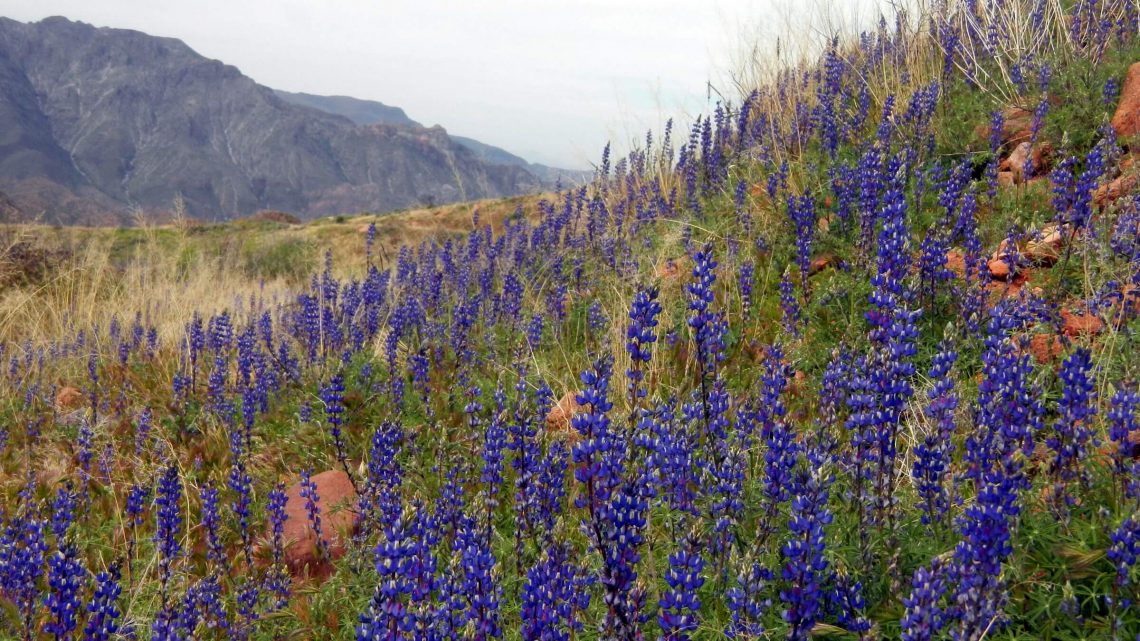 Nano warned me to stay out of the Superstition Mountains.

As we traveled along Highway 60 towards Miami, she pointed out the red-walled mountains along our route. Having lived 50 years in this small Arizona mining burg, my grandmother was well-informed on local legends.

“They say 100 men have died there,” Nano intoned. “Some were killed by renegade Indians or poisoned by alkaline springs. Some just disappeared and never returned.”

I could hardly wait to visit.

Now 50 years and multiple visits later, I realized I could be the very next victim of the Superstitions. We had just committed the ultimate desert hiking blunder: arriving at camp short of water, assuming a spring would be running. It wasn’t.

In a very dry winter 2016, we had arrived late afternoon at Angel Basin, a favored campsite on many blogs/websites four miles down Rogers Canyon from the Rogers Trough Trailhead and about 30 miles into our loop trip through the Superstition Wilderness.

Using GPS, David led us on a brushy hike up Angel Canyon to locate the spring. Dry! I ranged up Rogers Canyon half a mile in the dimming light of a December evening while David went downstream. Many campsites but not a single pool. We met at our dropped packs. We agreed to dry camp and head down canyon the next morning in hopes that one of the springs shown on map had water. Between us, we had about 1.5 liters of water.

Water—usually too much—has always set the tone for our 14 backpacking trips in the Superstition Wilderness. Even on our most recent trip (2020) after a large fire burned most of area, flooding and mud were the greatest obstacles.

Our first visit in 1978 was part of a Christmas trip to the Southwest to see my family and escape Oregon rain—or so we thought. We hiked sandy washes below rock pinnacles under bluebird skies and warm sun; enjoyed trails designed for stock that wound over passes; passed Garden Valley, Music Mountain, La Barge Box and Red Tanks; and saw just one group. The only negatives: spaghetti cow trails in Boulder Canyon and cow pies near Charlebois Spring.

Then winter rain hit. We fled rising water in LaBarge Wash over Peter’s Mesa, skirted a raging torrent in Tortilla Wash, and hiked a jeep road and State Route 88 back to our vehicle. Further wet adventures in:

Used lightly by early cliff dwellers and Apaches, the Superstitions attracted miners in the 19th and 20th centuries, then cattle ranchers selling beef to miners. Reavis Ranch had a vegetable garden and orchard. (Reavis’ gravesite is on the Arizona Trail [AZT] north of Rogers Trough Trailhead.) Springs and trails bear names of other stockmen. The popular Dutchman Trail was inspired by a German (“Dutch”) immigrant who claimed to have found gold. The “Lost Dutchman’s Mine” search has inspired many books and maps.

With elevations from 2000 to 5000 feet, the Superstitions often boast high temperatures and dry conditions and are best visited in winter or spring for cool weather and adequate water.

We often visited the area for Christmas break over the years and saw many changes: few people in the 1970s; in the 1980s, vandalism threatened parking at remote trailheads. Cattle numbers were reduced, but the vast trails network became less pleasant as thorny desert scrub encroached lesser-used areas, maybe because of reduced grazing after heavy use for many years. In the late 1990s the area became a favorite day or weekend visit for users from Peralta and First Water trailheads near Mesa. Stock (horse) overuse reduced some trails into rocky rubble; campers not cattle trashed areas near springs. The overwhelmed Tonto National Forest had difficulty maintaining trails in the 1990s and early 2000s, although recently has made progress with adopt-a-trail groups and active AZT volunteers.

2016 was our only real dry hike although we had found enough water in springs up until Angel Basin. After our parched night, we found lovely Hole Spring just two miles on down the canyon, although other springs were dry. We camped that night near Reavis Creek which had pools. We awoke to heavy rain, two more days of wild weather, and no more shortages.

We rarely used the popular trailheads but made an exception in March 2017—to my downfall. I was jogging down Peralta Trail from Fremont Saddle. I slowed to turn on a switchback, and braced my foot against a rock. Slick and polished from thousands of boots, the rock was like black ice. I fell and broke my arm.

This year’s change agent was fire. But water—unseasonal rains—may have been the culprit.

Started in late June 2019 by human ignition on the south wilderness boundary, the Woodbury Fire burned 96,000 acres, all of the wilderness except the popular westside trails near Mesa.

Heavy rains in October 2018 and January-February 2019 created a bright, mostly non-native, grass carpet in range country. Red brome (possibly planted for earlier cattle use) dried out in late spring and carried the wildfire to the crest of the mountains, burning most of the pinyon juniper and pine. Then a late September storm brought extensive floods and washed out SR 88 between Tortilla Flat and Lake Roosevelt. It’s still closed.

We did a brief visit to east side of Superstitions in December 2019 to ‘check out’ the burn area, hiking the unburned Haunted Canyon and then into the fire zone on sandy shallow West Pinto Creek (formerly a cool shady rocky stream) and a couple miles up the Campaign Trail, in fair shape but eroding and rapidly encroached by thorny vegetation.

Our last and longer visit to eastside Superstitions in March 2020 was quite wet. We were discouraged by multiple crossings of high, muddy Campaign Creek. A tantalizing green meadow high on the hillside above the creek was non-native invasive wild oats, a common sight throughout our trip.

When the canyon narrowed and crossings deepened, we abandoned our plans to loop via this trail and Fire Line to Reavis Ranch. Instead we hiked up Reavis Gap Trail and caught the AZT—a boggy track over a ridge and down to the ranch site. But we did not get to camp in the beautiful green pasture under the oaks—Reavis Creek was running high and fast and we hesitated to cross it in the dark. Instead we camped in remnant oak on mucky clay.

The next day I wanted to visit Reavis Falls (downstream from the ranch and reached by a steep route off the Reavis Trail [an old road]). With the high water it had to be stupendous. However, the burned road with numerous washouts was so slow-going, we had to turn back right where the falls route took off—to get back to camp before dark.

We finished our loop (down AZT and side trail back to our vehicle). But I wanted to see Reavis Falls. We agreed to hike in from beginning of Reavis Trail on the Apache Trail (SR 88). We were told that the road was open to the Reavis turnoff. It wasn’t. We parked at road closure and followed GPS up a steep wash to Reavis Trailhead, cutting off 5+ extra road miles. But it took an hour and the road through burn was slow in places, as was the steep 3-mile route to the falls. We got to Reavis Creek—still almost a mile short of the falls and with just enough daylight left to get back to Lime Mountain where we left our packs for camp.

We made the steep climb back to camp, vowing we’d return in the morning to finish the job. However we awoke to grey skies threatening rain and thought better of it. We’ve been flooded out too many times!