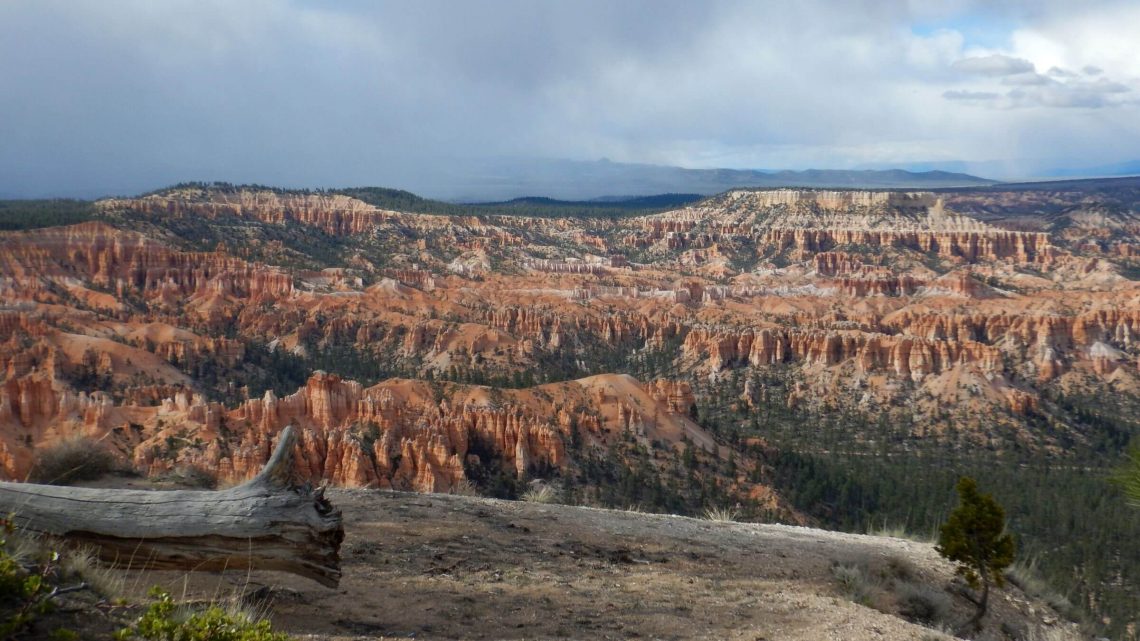 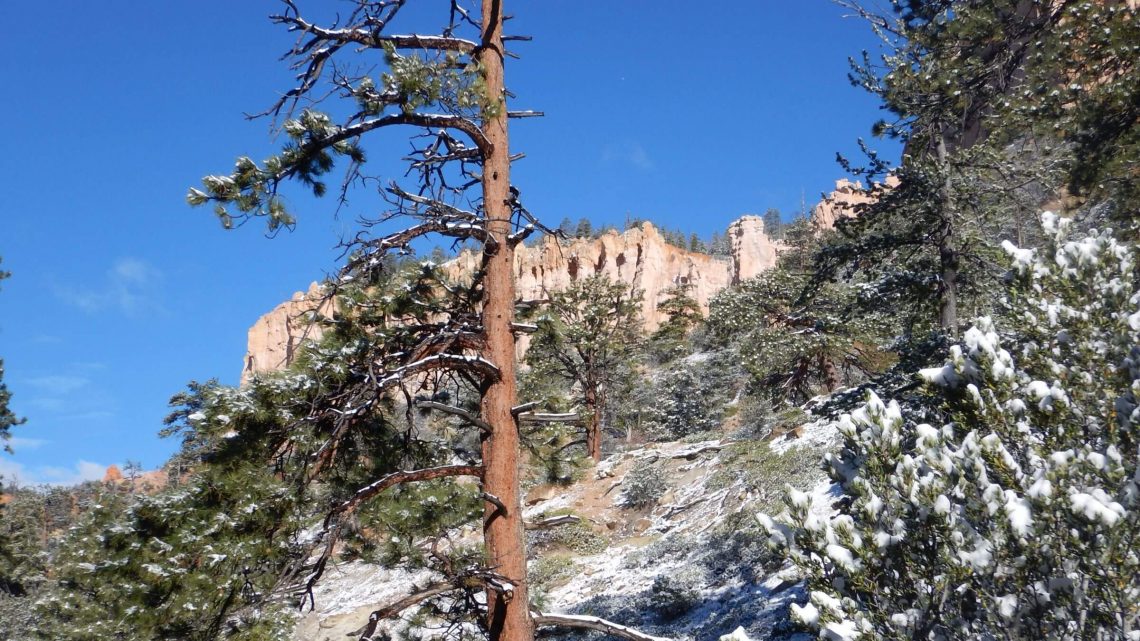 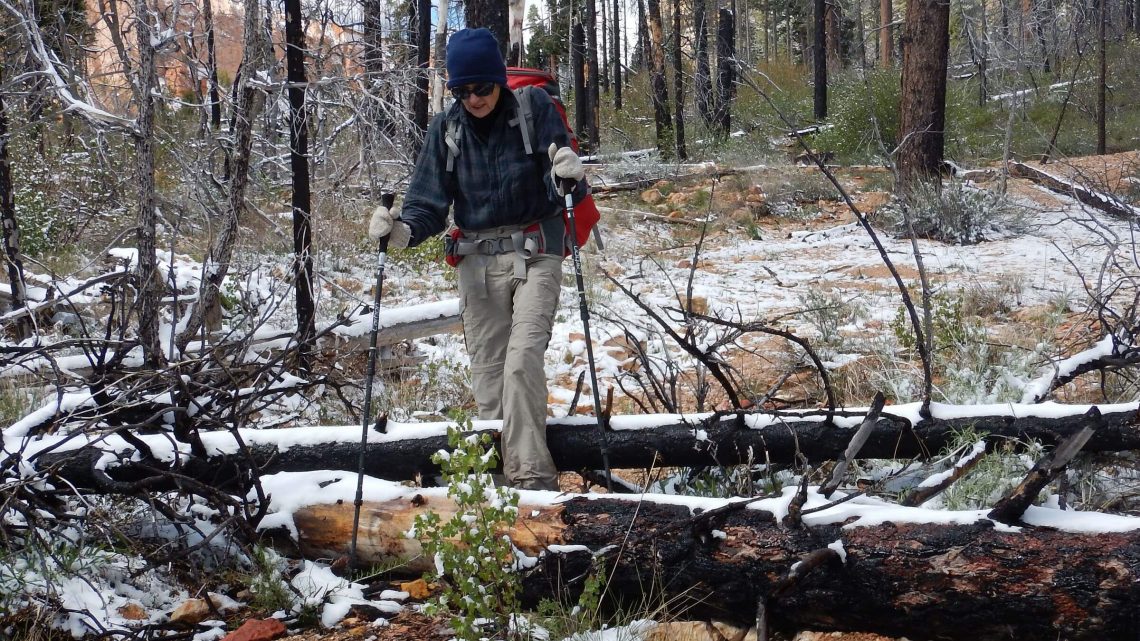 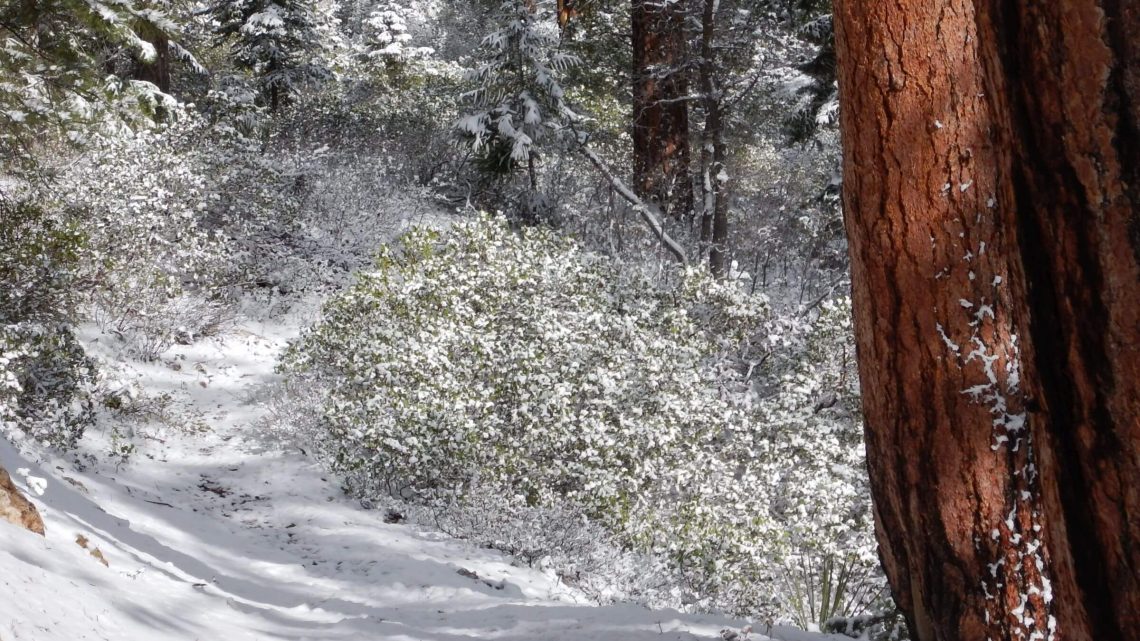 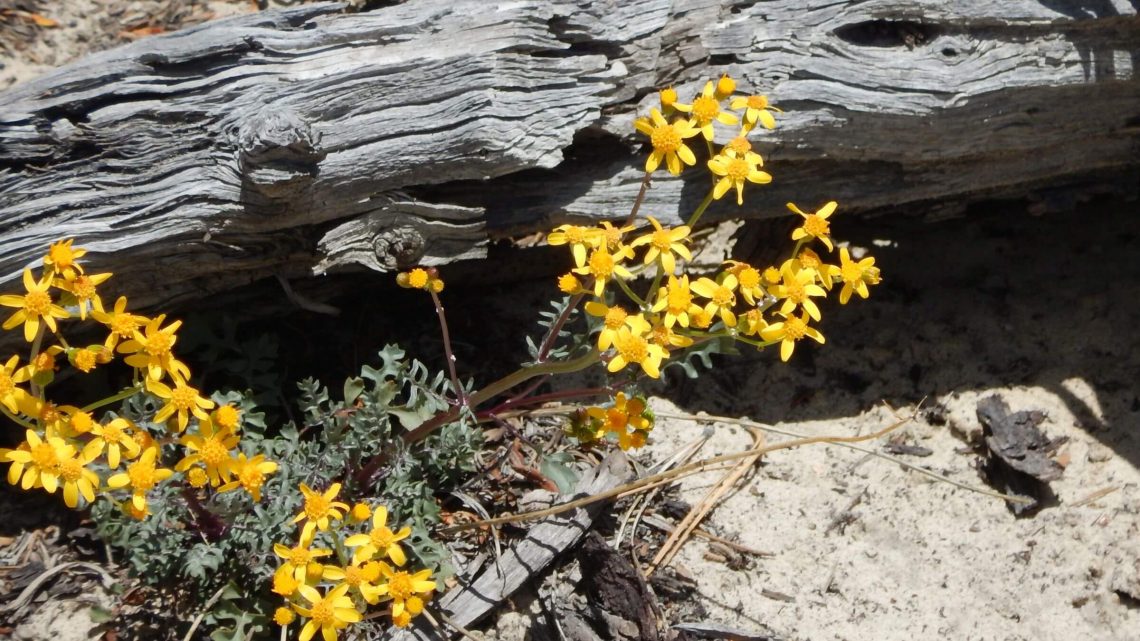 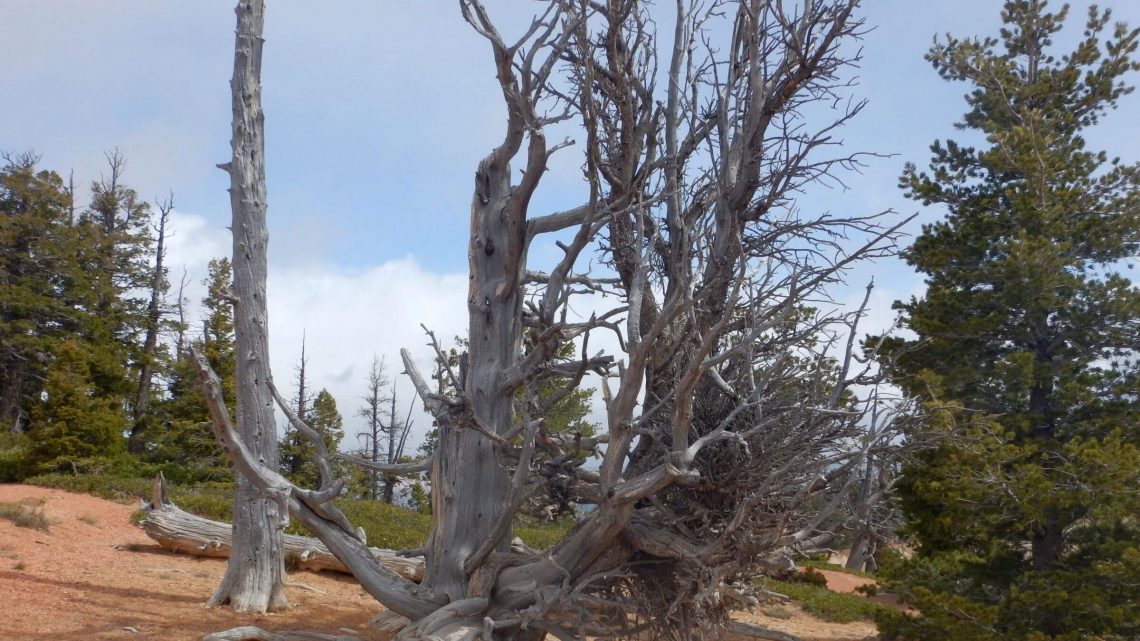 I once hiked nearly half of Bryce Canyon’s Under-the-Rim Trail in a morning.

Forty-two years later, my husband and I spent most of a day hiking this distance (along with a loop from Rainbow Point). We found this lightly used backpacking trail much rougher going—eroded, blocked by down trees, and indiscernible across rocky stream washouts.

We were particularly troubled by four miles of down logs in the Swamp Canyon area, a legacy of the 2009 Bridge Fire.

As a teen I spent hours hiking and jogging Bryce Canyon National Park’s wonderful day hiking trails through red rock canyons adorned with unusual figurines. From our home in Las Vegas, Nevada, Bryce was only a four-hour drive and a favorite family vacation spot. However, I had never hiked the Under-the-Rim Trail, the only area in Bryce available for backpacking and linking Rainbow and Bryce Points, where the most day hiking trails begin or end.

As a college student in the late 1970s, I wanted to introduce my family to my new-found love of backpacking. I proposed that my mother—a lifelong hiker—and I backpack the Under-the-Rim Trail. Mom thought 22.9 miles was too long. So my dad dropped me (with backpack) off at Rainbow Point, I hiked nearly 11 miles, and met my family midway at Swamp Canyon at noon. Dad and my middle sister Cammy packed an ice chest about a mile down the Whitman Connecting trail for a picnic. Mom and I hiked 7 miles to Yellow Creek to camp, then up to Bryce Point the next day. Her first and last backpack.

That, for me, was first of many forays under the rim: a birthday overnight with younger sister, Chris, and a friend, from Bryce to Rainbow Points in 1976; an out-and-back trip from Bryce Point to Rainbow Point (still closed from the winter snow) in May 1981 with husband David; and two short backpacking trips with our young daughter, Michal, in 1990 and 1991.

Revisiting Under-The-Rim for first time in May 2017 we found quite a different place.

Bryce Canyon Backcountry is recommended as wilderness but has never been formally designated so by Congress. National Park Service (NPS) recommended Bryce as wilderness in 1972 with additional acreage proposed in 1976 and 1978. Portal “wilderness” signs were installed by a proactive park superintendent some years ago. NPS often calls wilderness and recommended wilderness “backcountry” and basically manages such areas as wilderness.
“Bryce” was a family favorite for Cindy, who grew up in nearby Las Vegas, Nevada, and spent many hours on the maintained trails between Bryce and Fairyland viewpoints. In 2017 she was shocked at large crowds of day hikers visiting this area, which was little-known in the 1960s-70s.
Under-the-Rim Trail—the only backpacking area—extends 22.9 miles from Rainbow Point to Bryce Point. We made the hike about 9 miles longer by adding the Bristlecone Loop and Riggs Spring Loop from Yovimpa Point (both starting at Rainbow Point).
The Bridge Fire of 2009 changed much of this red rock and forest wilderness for the worst—especially the trail system. And we can only imagine what the Riggs and Lonely Fires of 2018 have done to Rainbow Point forests.
Our May 2017 visit included use of the Rainbow Point Shuttle Tour for drop-off at Rainbow Point trailhead, and regular park shuttle pick-up at Bryce Point. We faced cold wind, rain, and hail; and woke up to snow cover in an impromptu overnight camp just beyond Natural Bridge. Snow quickly melted the next day as we made our way out of the backcountry.
Visit statistics: 2 days, 32 miles, and 550 feet per mile average elevation change.
See map below for route and photos of this visit along with a few photos of previous trips.

We did some day hikes and cross-country skiing in Bryce after 2000 but 2017 was our first backpack trip there in 26 years! We did the trip as part of our regular “migration” north from a winter snowbird stay in Arizona to home in Idaho, so we had a fully loaded SUV with bicycles on the back. A room at Ruby’s Inn got us permission to park our SUV in the hotel parking lot during our overnight trip.

We came to Bryce Canyon Visitor Center for our backcountry camping permit on a cold windy evening. Europeans and others with tights, hiking boots, and day packs were everywhere.

The National Park Service (NPS) official insisted we take a heavy plastic “bear canister.” We heard the rules litany, paid for our backcountry campsite, and left for Ruby’s Inn. (We left the bear canister in our vehicle and instead used our time-tested “bear bag” hung high in a tree—and had no trouble with visiting bears in what turned out to be a snowstorm).

Restaurants were packed with après hikers so we drove to a café outside the park that was less crowded.

The next morning we got tickets at the bus booth for Rainbow Point Shuttle, which makes two runs a day and accommodates backpackers by going straight to Rainbow Point with more stops on the way back at rim viewpoints. At the end of our trip we planned to return on the regular park shuttle at Bryce Point, where Under-the-Rim Trail ends.

At Bryce Lodge a young couple with big backpacks boarded. They were from Pennsylvania and were planning a hike similar to ours.

At Rainbow Point, we hid our packs to day hike Riggs Spring Loop Trail before embarking upon Under-the-Rim Trail. I donned my raincoat against the wind and sleet. Confused, we did the Bristlecone Loop before we found Riggs Trail dropping from adjacent Yovimpa Point to a spring box and roaring creek. The trail was slippery clay and campsites at Mutton Hollow and Riggs Spring were gorgeous green.

Later that afternoon we met the young couple having lunch. They had also done the Riggs Spring Loop—with their backpacks! We did the long contour back to Rainbow Point, retrieved our packs and descended down a ridge, expecting to be overtaken, but we did not see the couple again.

We were saddened by trail conditions around Iron Spring that included several washed-out creek crossings with some cairns marking the way through the rubble. NPS had not cut out logs and the corral fence around Iron Springs was broken down.

At 6:30 p.m. we had hiked about 17 miles in (counting loops) and were only as far as Natural Bridge Campsite. We had planned another 3 miles to camp at Swamp Canyon but the storm had returned with heavy snow. Since we saw a tent in the designated camp area, we hiked to the next flat area. We got soaked setting up the tent in pelting snow. Frozen, I crawled into the tent and let hardy David cook dinner.

It was cold the next morning and David wanted to sleep in—but we had almost 15 miles and about 8000 feet up and down to Bryce Point to catch the last shuttle at 5:50 p.m. I left at 8; David had to take down the wet icy tent. Sunshine blazed on red rock above but my hands felt frozen in the cold snowy canyon forest. David caught up as I climbed a ridge and we descended into burned Swamp Canyon. We saw day hiker foot prints in snow ascending Whitman Bench, where my family hiked down to meet me many years ago and where our 3-year-old enjoyed her first backpack camp. It’s also where the Bridge Fire entered Bryce Canyon from the adjacent national forest.

I was glad we hadn’t pushed on to Swamp Canyon; the former old-growth forest was now rocky eroded plain with a few remnant trees. We made breakfast and dried out rain gear a bit further on at the Right Fork Swamp Canyon campsite site—a little less burned with 3 large ponderosa pine that survived.

Snow had mostly melted as we hiked up and down five side canyons. On descent into Yellow Creek, we met a backpacker with an exceptionally large pack and, further down, an enthusiastic but confused European who thought he was on Peek-a-Boo Trail loop enroute to Sunrise Point (opposite direction from where he was headed). I got him turned around. We got to Yellow Creek at 4 p.m. with 5.2 miles and a 2000-foot climb ahead to Bryce Point. I reluctantly passed a beautiful campsite at East Yellow Creek. Near the ridge, exposed switchbacks and brutal wind. I stopped to don another shirt, gloves, then my raincoat and heavy mittens. An excited hiker jogged past me on down the trail.

We joined hikers waiting at Bryce Point at 5:45 p.m.—with five minutes to spare. The bus was late but I was happy to see it at 5:55 p.m. We stopped at trailheads and the bus was full of hikers by the time we reached Ruby’s Inn. But very few had hiked the Under-the-Rim Trail.