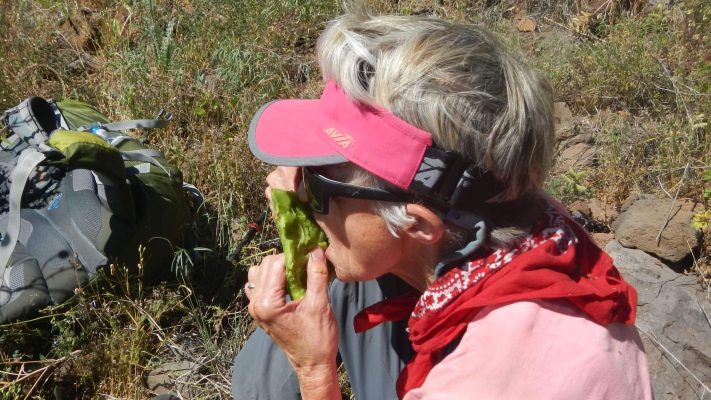 David and I met at the UA Ramblers hiking club in 1975. We soon were known as the “hard core” hikers. My minimum backpack day was 15 miles and 20 was about right. We stayed in shape between hikes by bicycling and jogging.

We’ve maintained those activities for 40 years, but not the pace. In our 40s, our 12-year-old daughter forged ahead and waited at junctions. In our 50s, Appalachian Trail thru-hikers surged past us. In our 60s, daily mileage has dropped into the teens, especially on rough trails in Arizona wilderness.

Not many people hike the western side of the Mazatzals, largest national forest wilderness in Arizona and a bit more than an hour from Phoenix. A few visit Mazatzal Divide via Arizona Trail (AZT) or access from the Barnhardt Trail off Highway 87 (Beeline Highway) or City Creek Trail west of Payson.

But the vast 200+-mile trail system west of the divide has intrigued us. We first sampled these rough trails during a 90s Christmas break, returning on the Divide in a snowstorm! In 2017 David went solo north, paralleling the AZT on unmaintained trails rendered more difficult by the 2004 Willow Fire, while I sulked at home with a broken arm from a trail-running fall. Since then, we’ve made several loops, intrigued by well-designed, barely discernible winding trails marked by huge stone cairns; old corrals; structures; spring developments and other features of a bygone grazing era. We’ve seen many AZT hikers on the Mazatzal Divide but on the westside trails only two hikers (pre-season deer hunters) and a few Verde River paddlers) on several trips, more than 260 miles.

But one has gone before us: Jacob Emerick, a young dad and website developer from Chandler who hiked every trail in the Mazatzals over the past few years. He started and ended in the dark and knocked off 20-25 miles a day on day hikes and brief overnights. Given the roughness of the terrain, I find this amazing. I followed Jacob’s adventures because it’s the only information on the western Mazatzals—besides Forest Service very general trail descriptions. Jacob had his share of misadventures from wasp sting to a Forest Service rescue to minor injuries; he had to pull a few trips and often fell short of his ambitious daily agenda. But he covered large mileages in short timeframes.

Jacob finished his “project” in January 2019 with a 50+mile loop of the northern Mazatzals using the AZT, Bull Spring and Wet Bottom Trail, Highwater Trail along the Verde River and Twin Buttes Trail back to a trailhead near Pine. He did it in two long days—starting before and ending after dark.

Last week we attempted Jacob’s loop in reverse—it took 5.3 days (a day longer than planned) and was stressful almost all the way.

Age wasn’t the only handicap. After two nice January hikes in cool weather, dodging rainstorms, we met the mountains in a hot spell: 100-degrees in Phoenix; our thermometer indicated 90s or better on the hot open mesas. A fine carpet of green was dead invasive plants by April; waist high, obscuring most cairns and requiring frequent stops to remove sharp seed heads from boots and socks.

No problem following rocky road from Twin Buttes to the Verde but from there on we were off trail more often than on for 4 days until we rejoined the AZT. The trail often did not follow the GPS route (based on old USGS topographic maps) particularly climbing from Verde River to AZT; GPS often took us cross country on steep climbs and drops. Little water except Verde River. On Wet Bottom Mesa, we ran out of water 5 miles short of only dependable spring; David found pools in a side canyon. Mileage dropped to 7 to 8 on those dry trailless days; only on road and AZT did we pick it back up. We emerged at Twin Buttes Sunday evening bedraggled and tired.

Not all bad. Sweet smelling carpets of flowers; cacti blooms in magenta and purple on hedgehog and yellow on prickly pear. Cool nights and stupendous sunsets (marred only by pesky moths, maybe artifact of abundant spring water or vegetation?) Views of the soaring purple Mazatzal Divide, Verde winding far below, Pine Mountain Wilderness across the way, faint glow of Phoenix lights. And oh yes, solitude.

Still I wish I had visited the Western Mazatzals in my “hard core” youth. We sure would have covered more miles on those nice pre-fire trails!