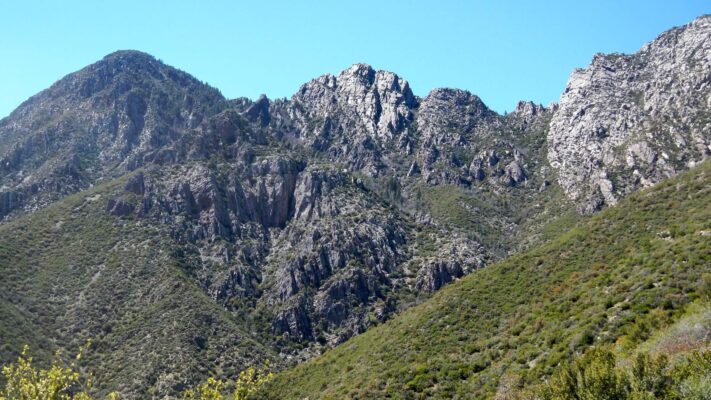 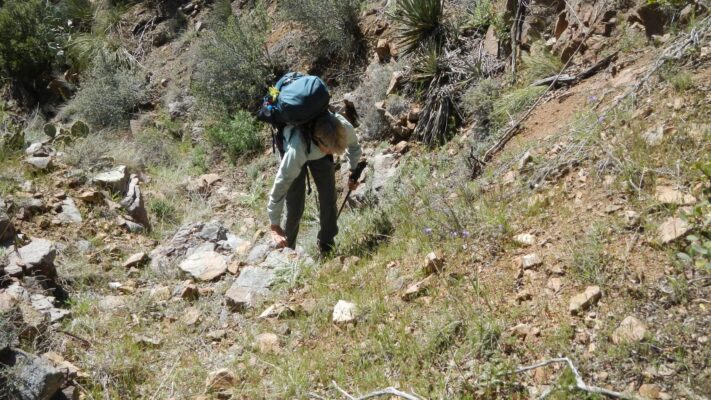 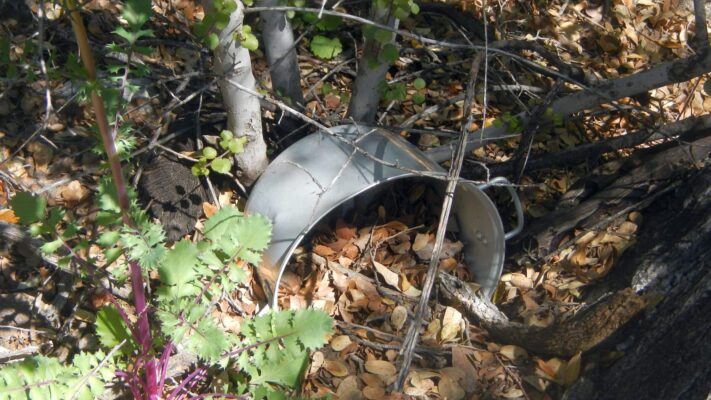 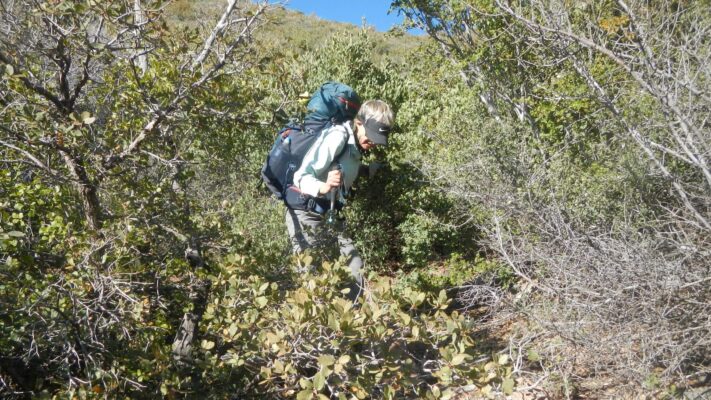 We emerged from Four Peaks scratched, beaten and sporting minor injuries. My left knee—whiny under any circumstances—started to “pop” as I clambered up steep slopes through heavy brush in Alder Canyon. David, who clipped back manzanita and thorny ceanothus branches then pushed and kicked his way through, developed back spasms a few days later. Near the creek he pointed out brown stems he thought were pre-leaf poison ivy. He was probably right. He developed a rash on back of his legs despite wearing long pants; perhaps it got in from open cuts on his legs from sharp brush.

Most definitely a trip to be remembered. But never repeated.

Most people hike by these iconic 7000-foot peaks looming east of Phoenix on the Arizona Trail (AZT) or access them near the top. The 19-mile AZT section climbs from Lake Roosevelt Dam, drops to a dry stream, follows ridge, climbs a peak then drops to two creeks, climbs again and contours around 50 drainages (I counted them) below Buckhorn Mountain, meeting road above Pigeon Spring. Four Peaks has been badly burned in a series of fires starting with Lone Fire of 1996 ignited by a careless camper—ironically—at Pigeon Spring. Half mile up the road is Lone Peak Trailhead where many hike to Browns Peak saddle and scramble up the peaks.

We wanted something different—a partial loop. We’d take AZT to Bear Saddle to drop down Alder Creek Trail #82, skirt the southern slopes of Four Peaks to a forest road to join other trails heading north and eventually connecting with the road system and AZT for return trip. The Tonto National Forest website, and Hike Arizona (a commercial trail website) both describe the trail as if it existed. It doesn’t. Alder Trail also shows on a topographic map, Superstition Wilderness, by Beartooth Publishing that also covers Four Peaks.

Listing nonexistent trails is a cheat.

I have posted before about sad state of Western national forest legacy trails in the new millennium. Historic trails created by Indians, miners and ranchers were maintained by the Forest Service (FS) in the 1900s for its own backcountry use—fairly easy in a temperate era when mountain trails were nice needle paths through stable conifer forests. From late 1990s on a “perfect storm.” Climatic change and possibly some forest succession regimes fueled mega-fires removing most trees, often followed by heavy rains causing rapid erosion from denuded slopes, silt in the creeks and rapid post-fire vegetative regrowth—invasives like red brome and thistle possibly seeded by earlier livestock grazing. Result has been eroded, washed out trails on barren sideslopes often cloaked in brush. Meanwhile the FS has less field presence; staff and funding focus on environmental analysis, unfunded social mandates and fire management. Little goes to home units for post-fire restoration and recreation, never a priority, continues to see cutbacks.

The Tonto staff has tried to include trail restoration in recent burned area emergency restoration (BAER) requests, seeks grants for heavy trail work and promotes volunteer trail work on forest areas near population centers. Even in Four Peaks, volunteers had completely reopened a section of Amethyst Trail linking Four Peaks and Brown Mountain trails—cutting manzanita to the roots with loppers. But no one has touched Alder Creek for years. It’s too bad. We found traces of a mellow trail under heavy brush.

This is one trail that could probably be completely restored by a crew with loppers and saws with minimal tread/ slope work required.

We gave up after making only three miles in a full day of thrashing. We mostly took drainages on the way back up, sometimes full of rushing waters, sometimes dry boulders. It took several hours to fight the last section of brush straight uphill to the ridge.

Looking for references to the Alder Creek Trail, I found this hiking post in the 2009 Arizona Sierra Club newsletter Canyon Echo under the trip guide “Explore and Enjoy Arizona.” I quote “…outing in the Four Peaks Wilderness will take us into the upper end of Alder Canyon. Portions of the Alder Creek Trail #82, once the most scenic trail in the Four Peaks Wilderness Area, was badly damaged by the Lone Fire…”