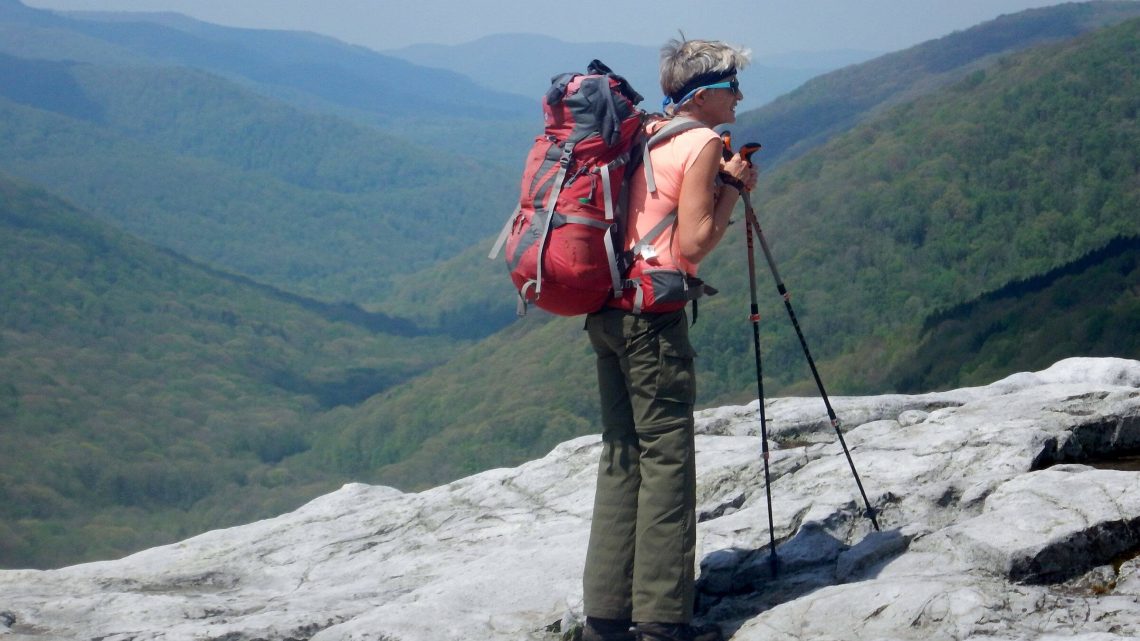 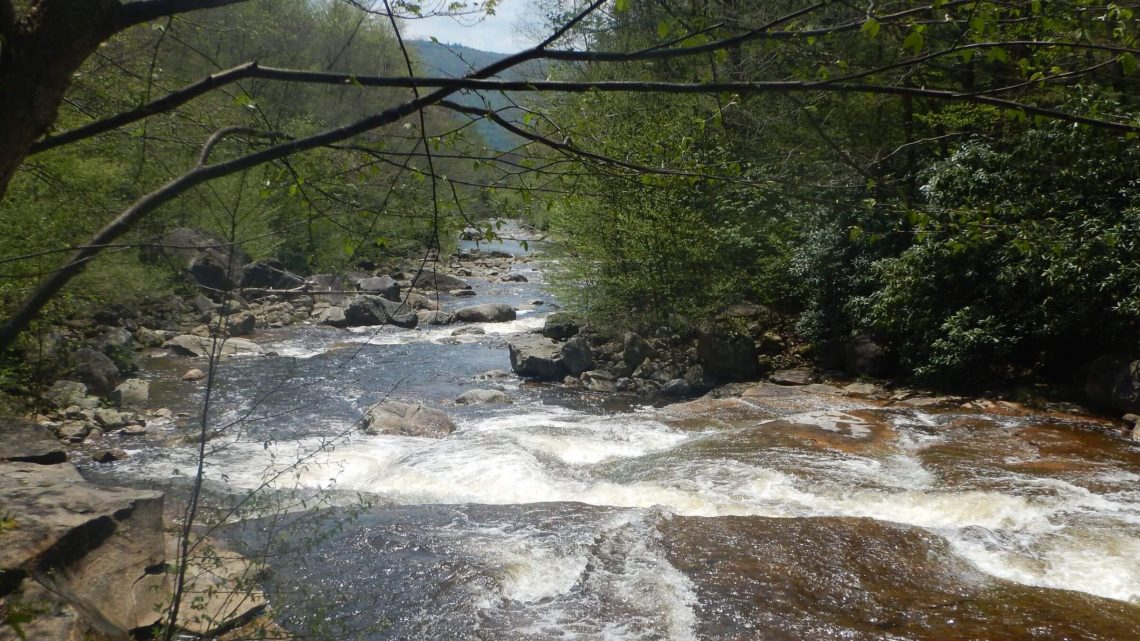 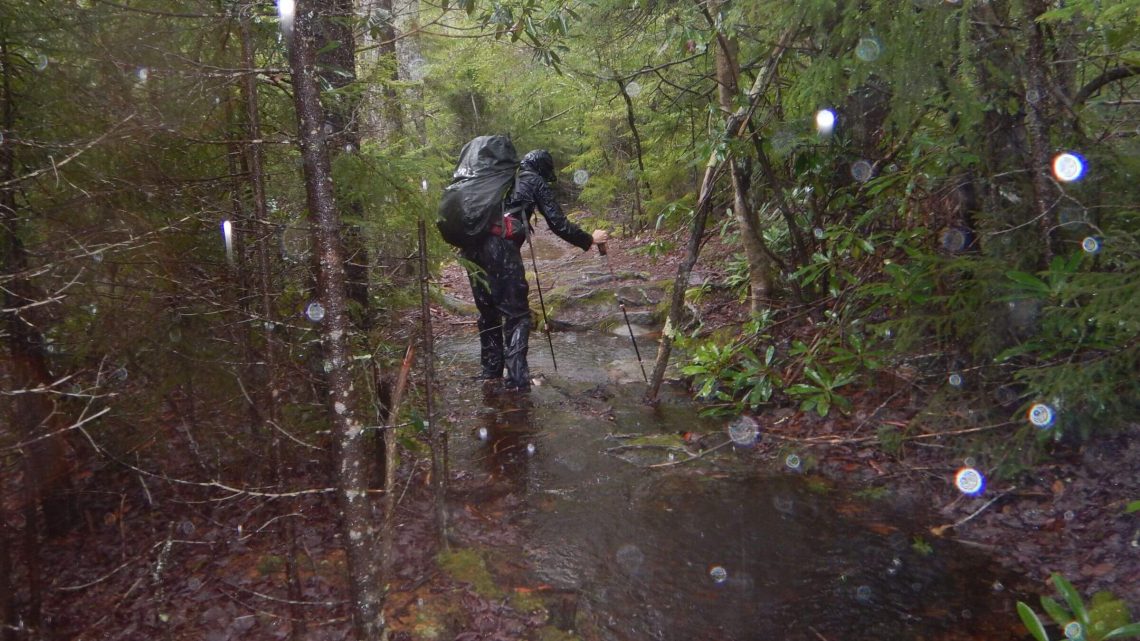 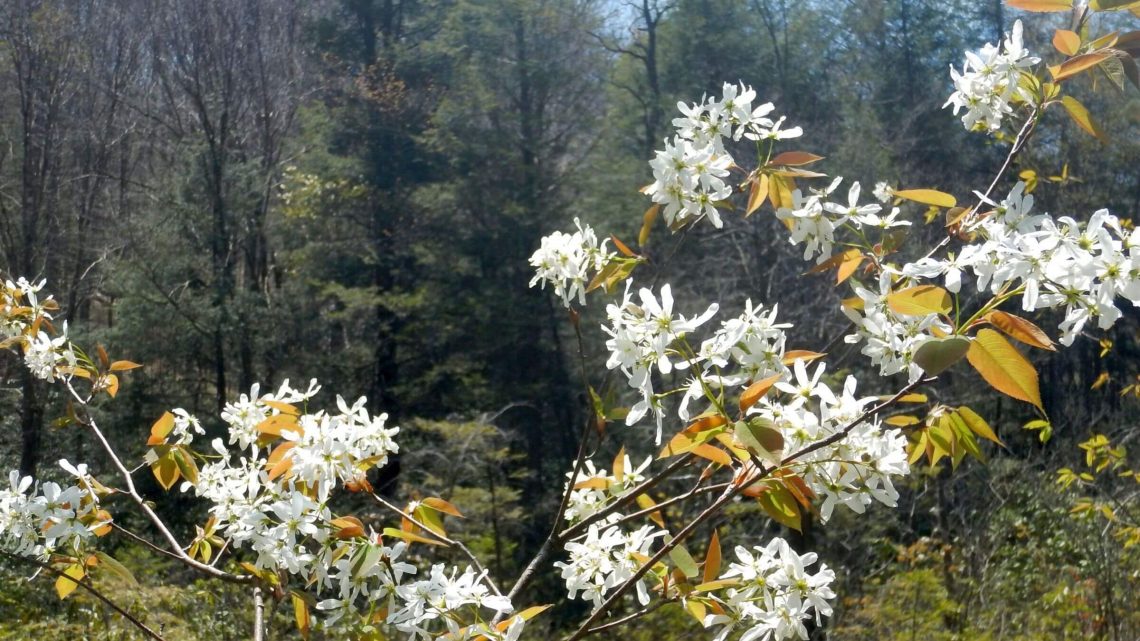 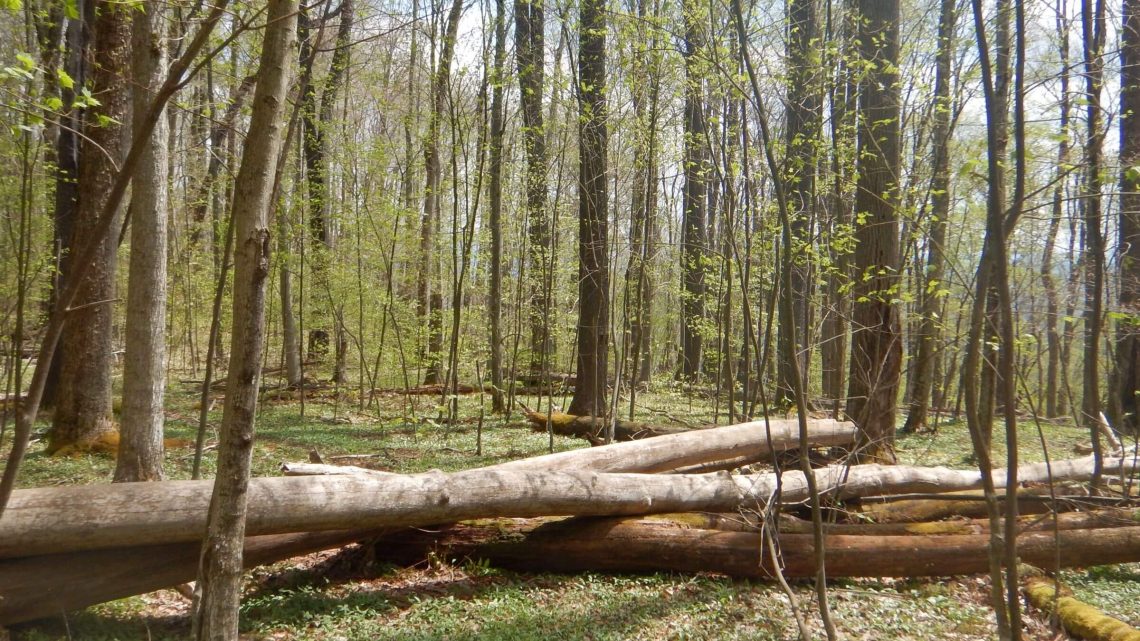 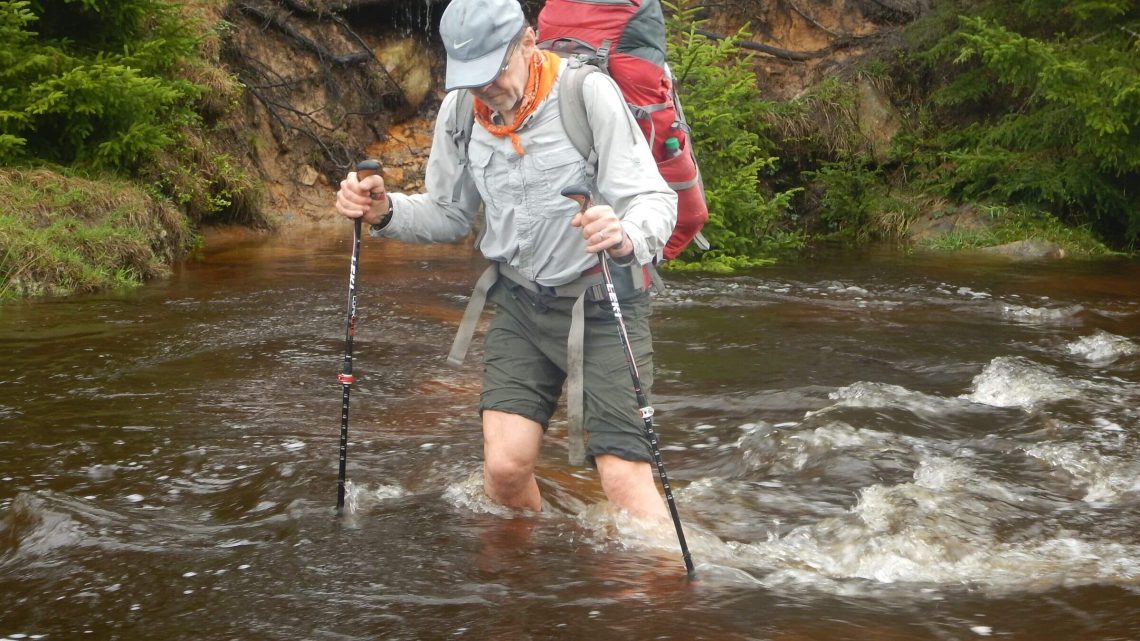 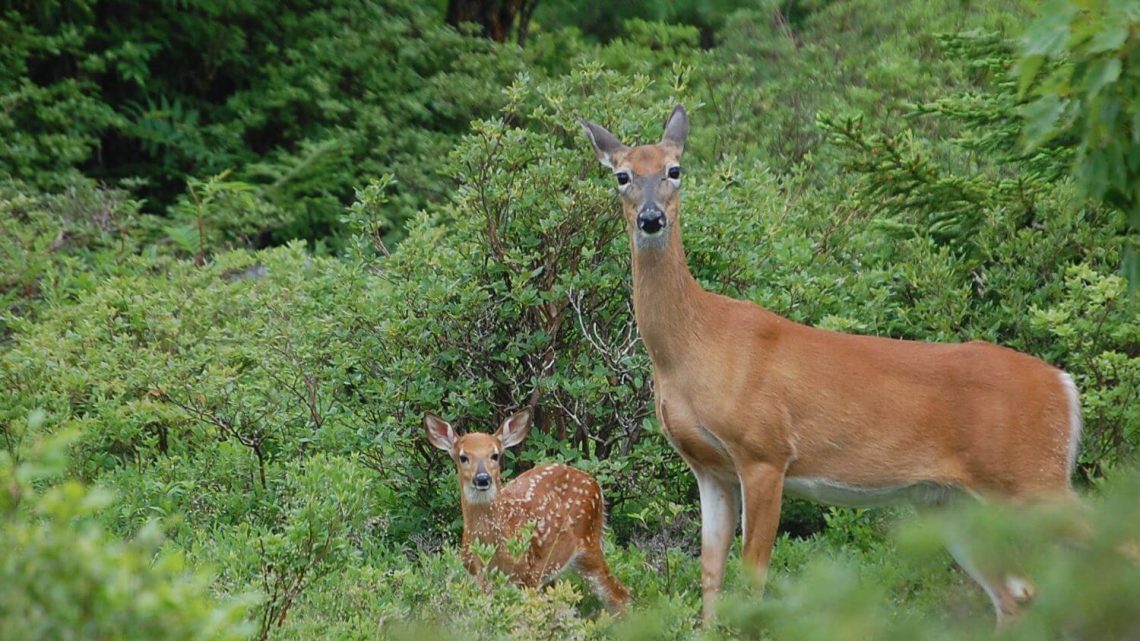 A dry spring sojourn in 2018 in the West did not prepare us for soggy May hiking in the East. In Arizona, we had planned trips around water; in West Virginia, we kept changing our route to avoid it! We did a first visit to Otter Creek Wilderness and revisits to Roaring Plains West and Dolly Sods. All three popular wilderness areas offer good trails and loops—just check the extended weather forecast first!

Otter Creek runs through a bowl between Shavers and McGowan Mountains. We looped along both rims, starting and returning on Otter Creek. Black clouds met us at Dry Creek trailhead and hard rain hit; we waited out worst in our vehicle, then donned rain gear, hoisted covered packs and hiked in drizzle as storm cleared. We camped just before the Otter Creek crossing.

The next morning’s creek crossing was not as bad as we feared: then a brief climb, and gentle hiking mostly on old roads. Except for chest-high rhododendrons on Moore Run and Green Mountain Trails and boggy areas, this loop is reasonable. Rhododendron may have come in after clear-cut logging between 1897 and 1914 and prevented return of native red spruce trees.

Further down Otter Creek Trail, we camped on a flat probably too close to the creek but luckily the pelting thunderstorm that night did not raise the creek appreciably, just sent streams through camp. We hiked out under steamy clouds with soaked gear, and dried out in a small-town park during a break in storms.

Otter Creek, Roaring Plains West and Dolly Sods Wilderness areas were visited in May 2018. We had previously hiked Dolly Sods in November 1999 and Roaring Plains in June 2011. In this visit, we first looped around Otter Creek, then drove to Dolly Sods’ Red Creek Trailhead to loop through the other two, which are separated by a forest road.
Weather reshaped our visit with increasingly heavy rainstorms that challenged creek crossings. We avoided most Otter Creek crossings by using ridge trails. In Dolly Sods, we postponed crossing Red Creek at the start by reversing our loop to enter adjacent Roaring Plains West on high ridge.
Periodic rains persisted making tough crossings and wet camps in Dolly Sods; a final intense storm the last day forced an alternate route outside wilderness to avoid Red Creek, which grew much higher during our visit.
Trails in all three wilderness areas were mostly quite good and well-marked; often old logging roads or railroad grades were connected by hiking trails to make the wilderness quite accessible.
On our 2018 visit, we hiked 85 miles in 8 days and averaged 1.9 miles per hour; average elevation change was 250 feet per mile.
Routes for previous trips were not mapped because no GPS tracks were recorded and Monongahela National Forest maps for wilderness areas are quite good.
See map below for detailed daily routes, mileages, elevation changes, and photos.

Our loop through Roaring Plains West and Dolly Sods was partly a revisit. When we lived near Washington DC, we came to grey, cold, windy and dry Dolly Sods in November 1999 with our teen daughter.

Water reshaped our 2018 revisit, a planned loop through Dolly Sods and return via Roaring Plains. This route required immediately crossing Red Creek, a roiling river we had crossed on a road bridge en route to the trailhead. As we parked, a couple emerged from the crossing. “Challenging,” they said. We skipped the challenge. Hoping water would subside in a few days, we hiked back down the road and up Flatrock Run Trail into Roaring Plains West, camping on a hardwood flat.

Rain hit the next morning. I left first, so I donned raingear and a pack cover and kept going; David, still packing up, was soaked! We stopped at a windy spruce flat to dry out gear and make a late breakfast.

A sun-cloud afternoon lit up carpets of blooming phlox and big white serviceberry shrubs on Roaring Plains; beautiful camps were nestled in a spruce grove. We left wilderness on a pipeline road along South Prong Trail, but soon met a violent storm: wind, hail, hard rain, lightning and thunder too close. We waited out the hail in a spruce grove, then slogged through the storm, which cleared at sunset.

There was no rain the next day for our hike through rugged Rorbaugh Plains into Dolly Sods; however, a hike along Fisher Creek down to check out potential Red Creek crossing to a loop trail (a mere rock hop in fall 1999) ended at high rushing water. So we chose to hike on up Fisher Creek Trail to hike road on the eastern boundary, planning to hike into the north end of the wilderness and cross two higher-up Red Creek branches with less water.

Blackbird Knob Trail seemed a popular access; we saw many vehicles at the trailhead and met several hikers. The trail was boggy with strategically placed rocks. My old boots leaked; wet skin folded over, creating a pinched sore between my toes. I was constantly replacing moleskin, tape and bandages dislodged by soaking socks!

After crossing the first fork of Red Creek (on stones under water but not slippery) we chose a heavily used camp in spruce on the creek bank. Hard night rain ran down the trail and flooded a depression around our tent. The new Big Agnes tent proved to be waterproof on the floor and lower sidewalls. But David had to rescue our boots, floating in six inches of water under the tent fly, and then used a hiking pole to channel water away from our tent.

The next morning, we were glad we’d already crossed the creek, which was now at least a foot higher. Left Hand Fork was running far above crossing rocks. Contouring Blackbird Knob we saw verdant meadows above Red Creek, wildflowers and looming Roaring Plains.

A half-hour of cloud-sun to dry gear was the last we saw that trip. Near a westside trailhead we met other hikers, then five young backpackers coming up the route we would take back to Red Creek. How was it? Wet.

The trail was boggy and Big Stonecoal Creek crossings deep and swift. We tried to avoid one by following a side trail that ended in bog. We put on sandals, crossed the creek and thrashed through bog and wet forest to rejoin the trail. Lovely camps appeared after the last crossing, but we continued up the trail, climbing to the ridge between two creek drainages; it was steep and rocky at first but then we reached a smoother bed created by runoff water. Rain returned. We needed a campsite. Only one flat area off trail under a large spruce was still dry. While rain roared, I huddled under the tree in relative comfort and cooked dinner.

It was still raining the next day; now camp was soaked. Since the trail was mostly deep pools, we again put on sandals. We changed to boots for steep descent into Little Stonecoal Creek. Small waterfalls from the waterlogged ridge continually crossed the trail, pouring into Little Stonecoal Creek. We faced crossing this growing torrent at its confluence with Red Creek, then bushwhacking the last three-quarters of a mile on steep canyon terrain to skip the dangerous Red Creek ford and cross on the highway bridge. David nixed this venture and we backtracked up the canyon. He used GPS to navigate up toward a road on Stone Camp Mountain, and happily, found an old connecting route at least used by wildlife.

The road descended in leisurely switchbacks to the highway we had hiked a few days ago. It was saturated with ponds. Our roundabout route was almost six miles compared to the two miles planned but went by quickly and enjoyably, freed from fear of crossings. Soon we stood amazed on the bridge over the river known as Red Creek (further swollen from South Prong just above draining the saturated Roaring Plains): a fast, deep, red-brown torrent much deeper than when we saw it four days earlier!