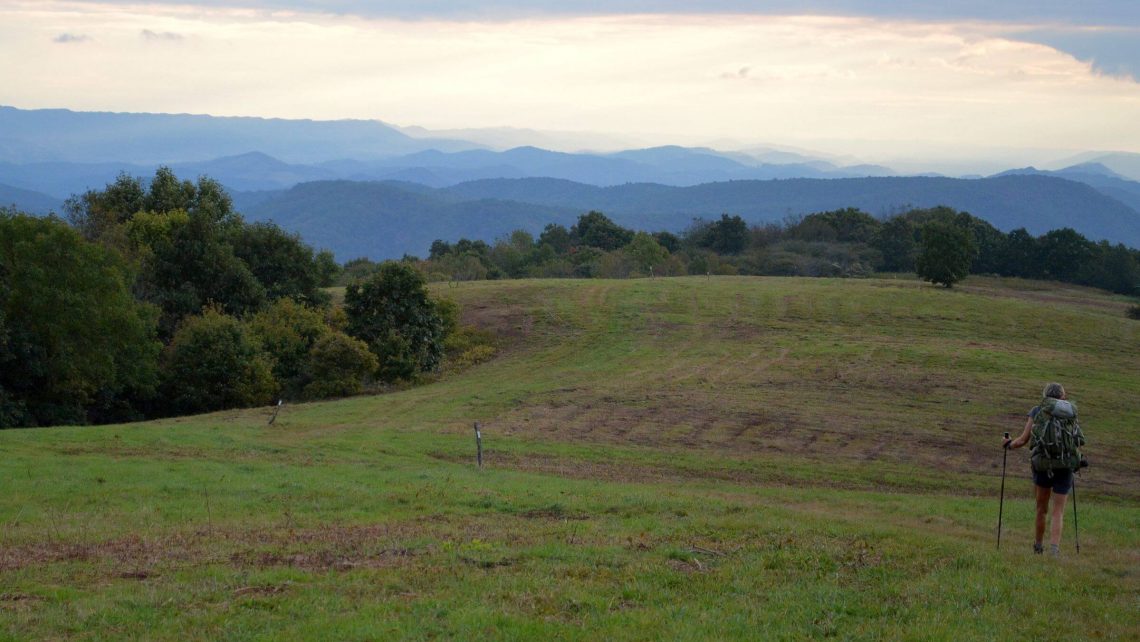 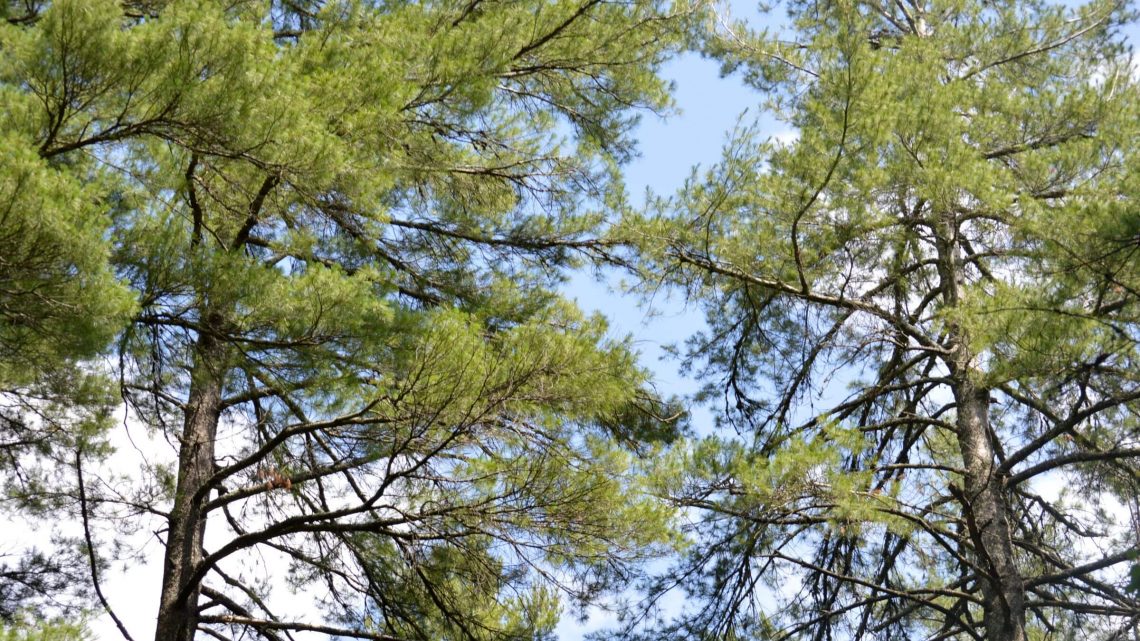 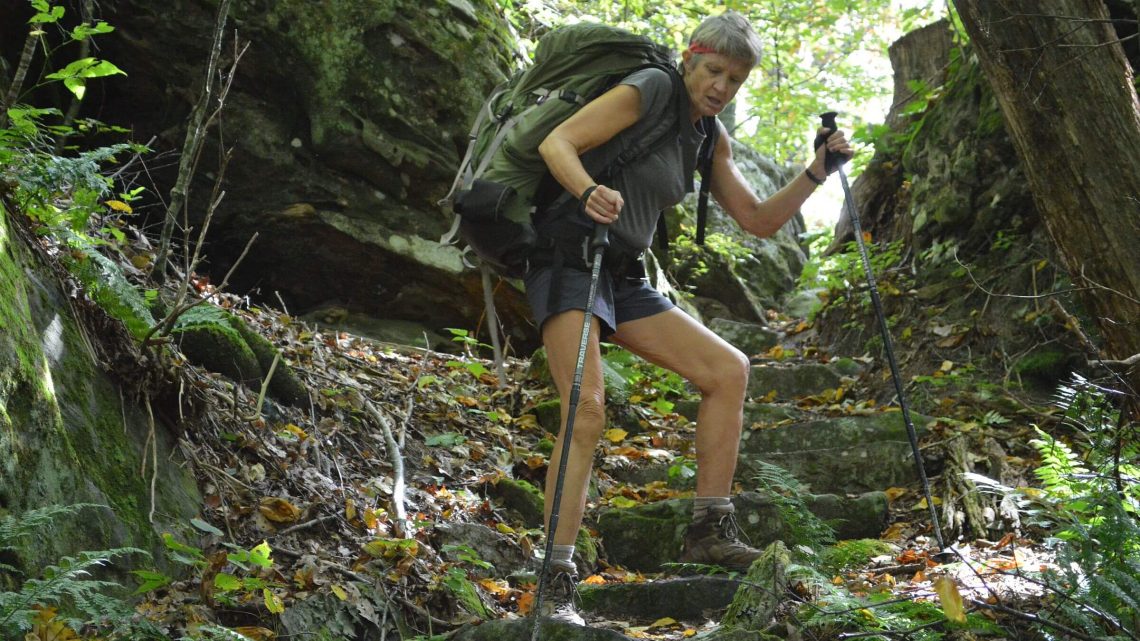 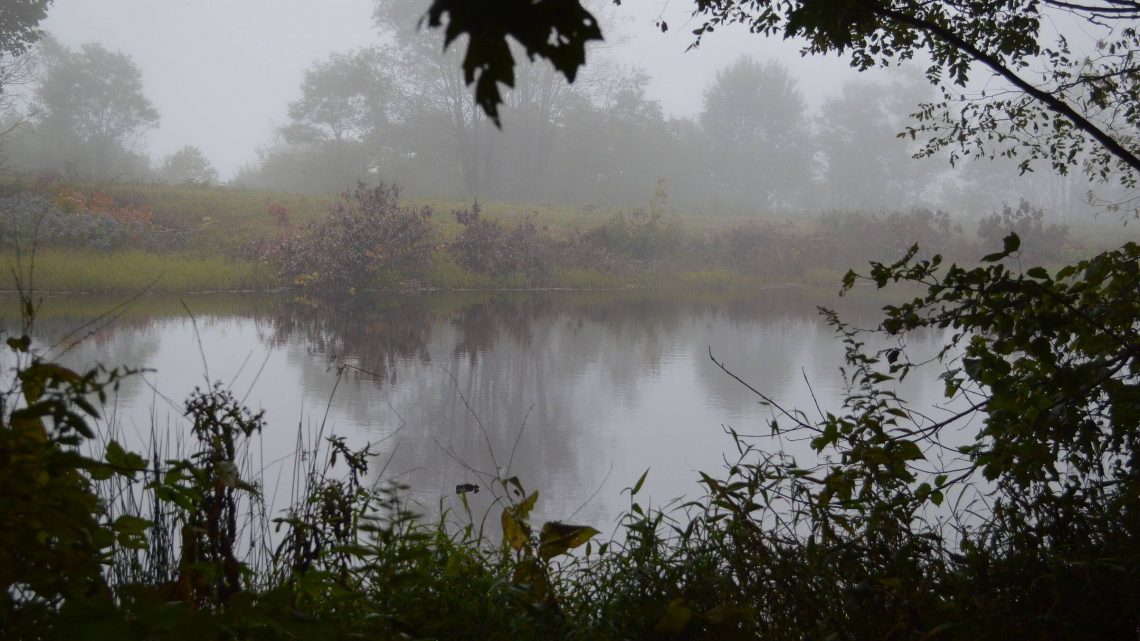 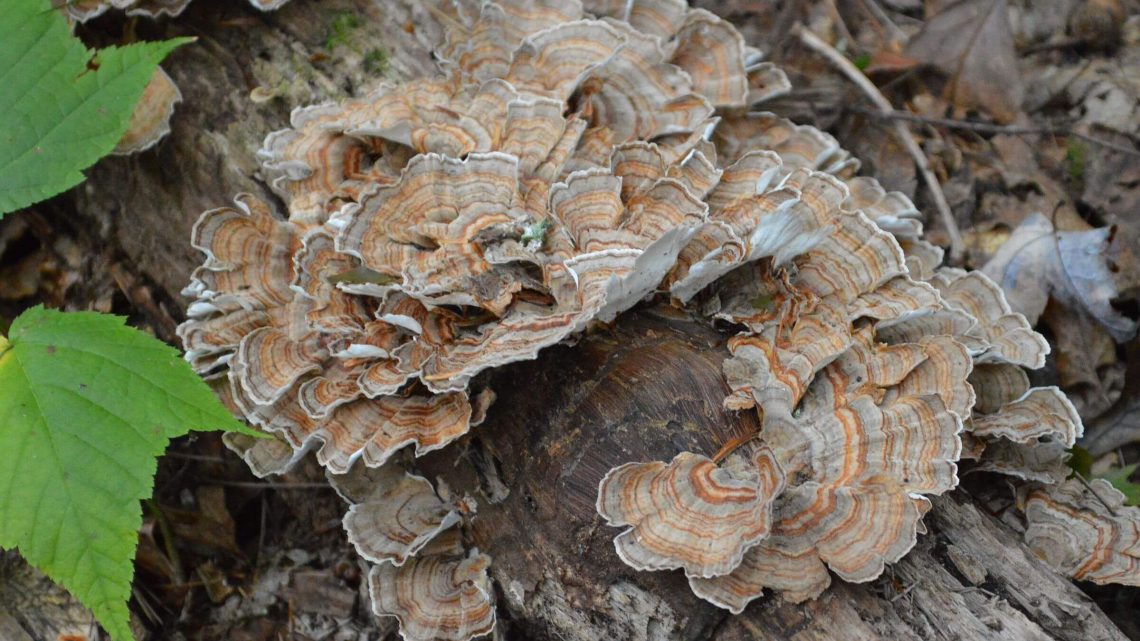 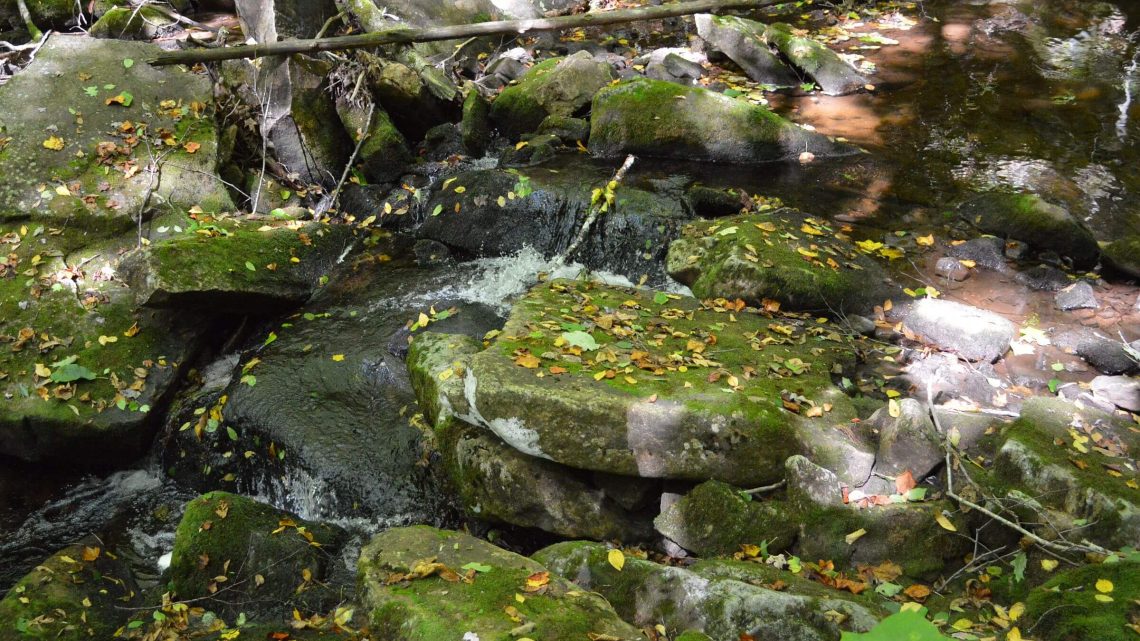 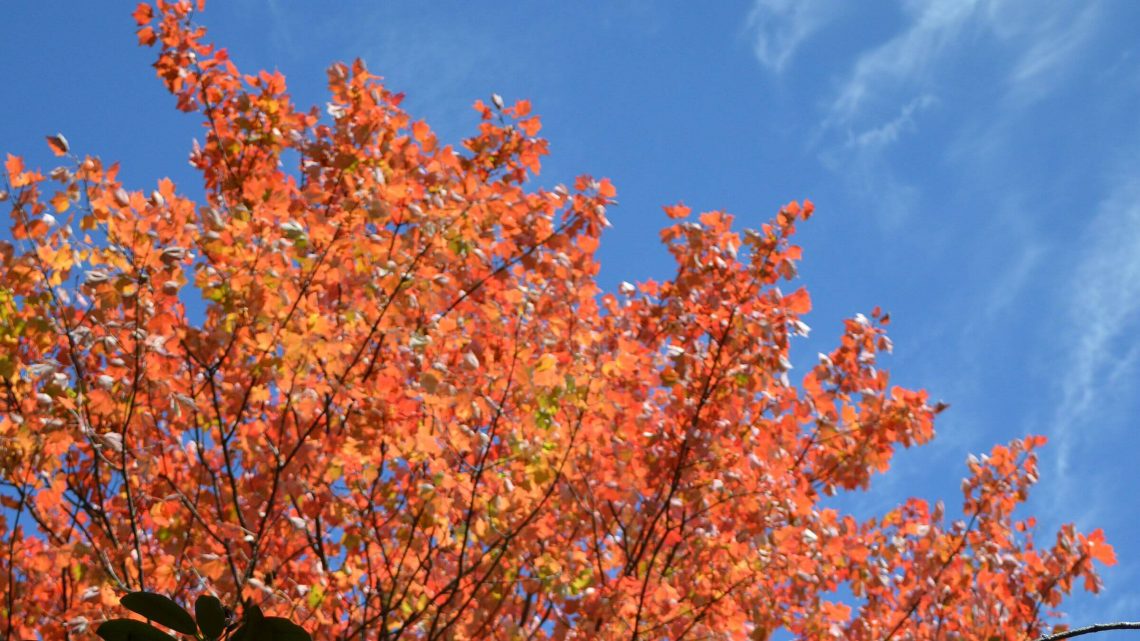 Our Virginia Wilderness Project was going well. Between 2012 and mid-summer 2014, we had visited 16 of 24 wilderness areas. But other work and life caught up, and we didn’t hike for two months.

In September 2014 we squeezed in a quick trip to three wilderness areas along the Appalachian Trail (AT) on a spine of the Appalachians above Burke’s Garden, the state’s highest valley. Trying to pack late the night before our trip, I went on autopilot and threw in “all the food we might need.”

Add in a late start, a “fender bender” at a truck stop, a steep rocky climb, back troubles, a hungry bear looking for “trail magic”—and the short-section hike on the AT wore us out, fell short of our goal for a scenic view from Hutchinson Rock, and even left us hungry the last night in the wilderness.

However, we found many options for improved recreation and backpacking loops in this scenic country, with a little trail work and imagination beyond the Appalachian Trail.

Virginia Wilderness Project covered visits to 24 Virginia wilderness areas.
Posts on wilderness visits are organized by physiographic region.
This post covers 2 visits to 4 wilderness areas in southern Valley and Ridge region: (1) Kimberling Creek in July 2014 and (2) Hunting Camp, Garden Mountain & Beartown in September 2014.
These are mostly trailless except for short spurs and where Appalachian Trail (AT) follows a wilderness boundary or passes through; there is great opportunity to develop connector loops with AT for quality backpacking experiences.
Visits totaled 6 days to hike 68 miles, and average elevation change was 425 feet per mile.
See map below for detailed routes, mileages, elevation changes, and photos.

Our first venture into the southern Ridge and Valley region was a July 2014 day hike of boundary roads of this virtually trailless wilderness. This is a headwaters wilderness composed of North Fork Kimberling and Sulphur Springs creek drainages.

Where the main road met Sulphur Creek at the wilderness boundary, an old kiosk frame and pullout perhaps indicated unfulfilled plans to showcase this area, which became wilderness in 1984. On the drive north up Sulphur Springs Creek, signs identified wilderness east of the road. When the road got rough, we parked and hiked; tracks indicated 4WD vehicles went on. The road climbed past tasty black raspberries, across the path of a striding turkey and through a power line opening to Hogback Ridge Road; the north boundary of the wilderness was also indicated by signs on trees. We hiked a mile on the muddy, more-travelled road along a 3200-foot ridge among oak and pines.

On return, we stopped at the kiosk and hiked into the forest flat near the creek. That was the only time we set foot in Kimberling Creek Wilderness. The “Wild Virginia” guide (in hiking book recommendations link) suggests routes including an old trace along Sulphur Creek and a railroad grade on North Fork, but hardwood forest bushwhacking trips are probably best in “leaf-off” season.

Our “section hike” in late September 2014 on the AT to bag three wilderness areas did not go as planned. The trio lie along Garden Mountain, a series of ridges encircling Burkes Garden—a high valley of farms. Pressed for time, we planned and packed late the evening before, then left late morning from the Washington, D.C. area. After stopping for a sandwich at a busy truck stop, we left the business and were waiting at the driveway for an opening in truck traffic on the access road. Suddenly we were hit from behind by the truck-stop wrecker—the driver, warily watching for 18-wheelers, did not notice our small, low rental car. Just a fender bender, but another delay. We got to Hunting Camp Creek Trailhead at 3 p.m. and hiked five miles to Jenkins Shelter, glad for woods enroute which held off the worst of an afternoon rainstorm. We shared the shelter with “Waldo,” a section hiker with a demanding city job on the verge of his 1000th mile; he said he plans all his business and personal travel around logging miles on the AT.

The next morning we met a cheery couple bopping down the switchbacks, finishing a last section of their thru-hike to Maine. (Later I read their story in the Chestnut Knob Shelter register: they had left the AT to help a lost dog!) We were not bopping with heavy packs on the steep climb. David gallantly took weight from my pack—triggering back spasms. At the 4000-foot ridge, we decided to lose some weight since we were coming back this way. Freeze-dried dinners and vegetables, pudding mixes, a bottle of dry milk, and power bars were stashed in a garbage bag stowed behind a rock just off the trail. We had only one rope (for camp bear bag) so could not hang up the food. We left only aluminum wrapped or heavy plastic items we presumed were odor free.

Less burdened, we followed the AT many miles to Burkes Garden Road between Hunting Camp and Garden wilderness—impressed by limestone formations on the ridge and occasional spectacular views of the green “Garden” below. However, we found the post-rain rocks—still wet and slick—very tiring and packs still heavy. David wore his pack low to avoid back spasms, and had to take small steps. I had planned to hike the AT to Beartown Wilderness and down a side trail to camp on Roaring Fork, so we’d have a whole day to hike a route to Hutchinson Rock I’d heard about. But we were moving slow, passing the Chestnut Knob Shelter on the edge of Beartown in late afternoon and getting to a pond campsite at sunset—three miles short of my planned camp.

Sore from back pain, David slept in; we did not leave camp until 10 a.m. The AT here was a wide swath cut through old farmland vegetation by a “brush hog”—rotary-blade on a tractor. After a half mile, we left the AT for a side trail that connected to an old road into Roaring Fork. Rhododendron had made it foot path width; cans and trash likely indicated anglers and hunters coming in from a nearby road outside the wilderness. When the old road ended at small falls and a deep pool, we saw flagging across the creek—a route marked to the ridge. We followed flags off and on up Beartown Ridge, climbing above Cove Fork. Near the top we found a flat clogged with red spruce. We had not found the route to Hutchinson Rock and we were out of time! We followed the flagged route most of the way down and got to camp at 6:30 p.m.

Hiking the next day was much improved with the AT rocks dried out, great views in the open fields and time to read thru-hiker entries in the register at Chestnut Knob. We made good time back to our food stash, joking that we would find the food gone and a note from thru-hikers, “thanks for the ‘trail magic.’” (Acts of kindness along with treats on the AT are dubbed “trail magic.”) We were partly right. Our food was gone, but there was no note. A shredded garbage bag, granola bar wrappers, torn freeze-dried dinners—the plastic milk bottle and other packets gone completely. A bear had found our “trail magic.”

That night we camped on Hunting Camp Creek (we skipped Jenkins Shelter after passing several tents of ‘overflow’ weekend hikers) and ate a meager dinner of cheese and candy. In the tent, a sound like rainfall on the roof was acorns falling, what foresters call a “good mast year.” Lots of bear food available but maybe bears want variety. The climb the next morning was long but we were happily distracted by a diverse crop of mushrooms that appeared after the rain—at least a dozen sizes, shapes and colors. Also we met a few more happy thru-hikers.

Later that day, we drove way around Hunting Camp Creek Wilderness to visit Lick Creek Trail—the only trail in Garden Mountain Wilderness on its southwest end. (The AT runs along the wilderness boundary.) The trailhead was not marked from Burkes Garden Road but the GPS map directed us to a trail on the far side of the road descending to Lick Creek. The creek was silted and muddy, perhaps because well-traveled Burke’s Garden Road drains into it. The trail began with ducking under rhododendrons but opened to an old road to the wilderness boundary.

Interestingly, our GPS map showed Lick Creek Trail continuing north on the other side of the road to Hunting Camp Creek all the way to Jenkins Gap Shelter, but we did not find evidence of this trail on either end. However, we did check out an old logging road shown on maps about a half mile up Burkes Garden Road on the west side that contoured above Lick Creek tributaries. We hiked to its terminus. Fall colors of gold and red were just beginning to peek out of the green woods. We observed recent work with a caterpillar on the road to build berms to prevent vehicle use: odd wilderness “management.” We later learned the area had been logged a few years before it was made wilderness in 2009.

These four wilderness areas are “linked” by the AT and could provide much more recreation and backpacking opportunities. A few creative trails would allow loops through three of the wilderness areas by utilizing the AT: (1) The old trail along Hunting Camp Creek below Burke’s Garden Road to the Jenkins Shelter on the AT could be reopened. (2) A Garden Mountain loop could be created by extending Lick Creek Trail west with a ridge route to Walker Gap on the AT. (3) In Beartown Wilderness, the flagged route from Roaring Fork up Beartown Ridge could be improved and continued to Hutchinson Rock with an additional route along the ridgeline back to Chestnut Knob Shelter on the AT, creating a nice loop with the connector trail from the AT into Roaring Fork. These loop trip options might reduce some of the “out and back” section hiker pressure on the AT.