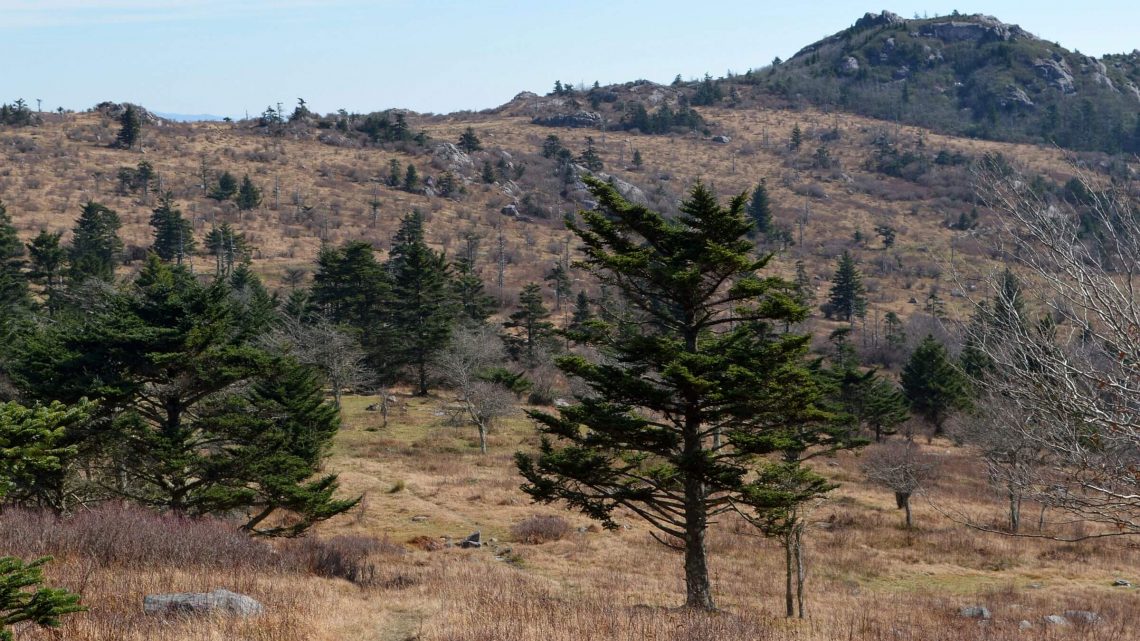 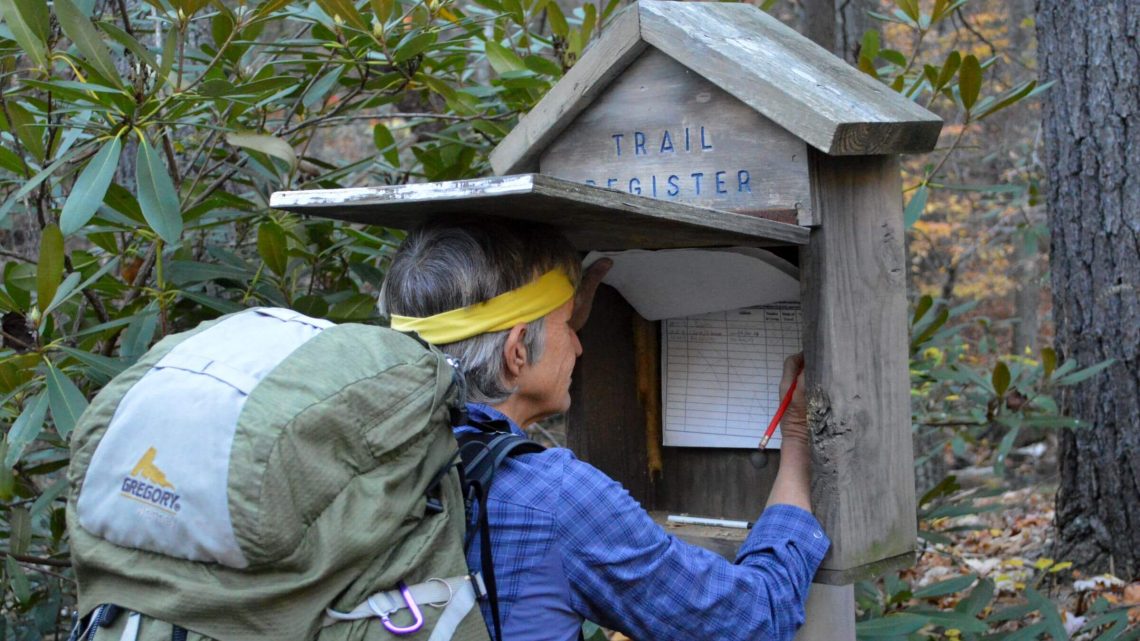 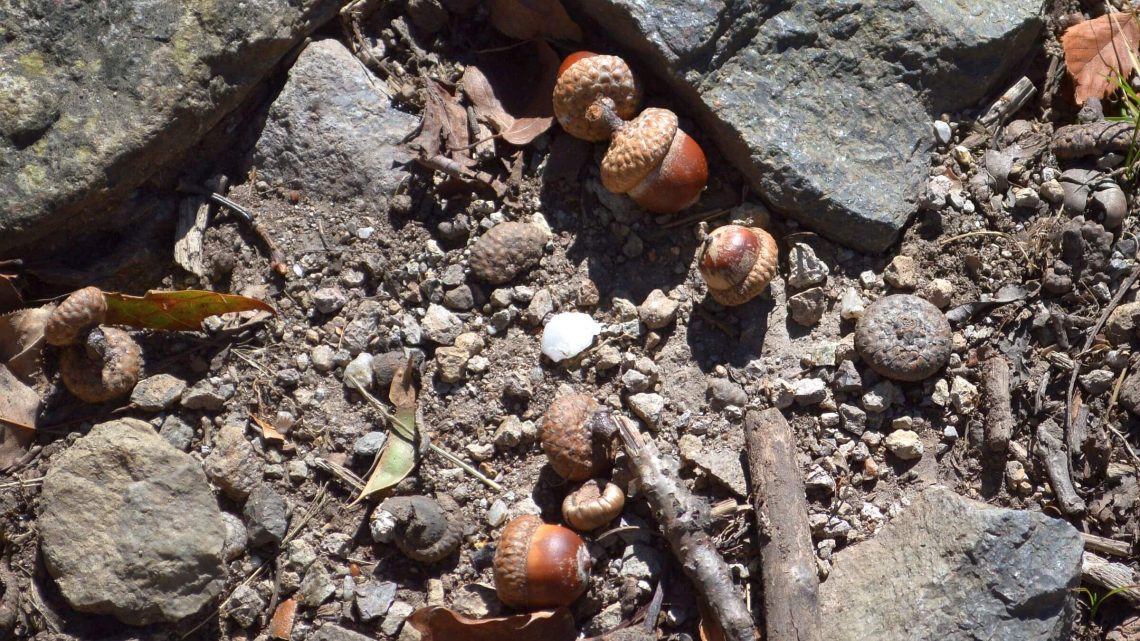 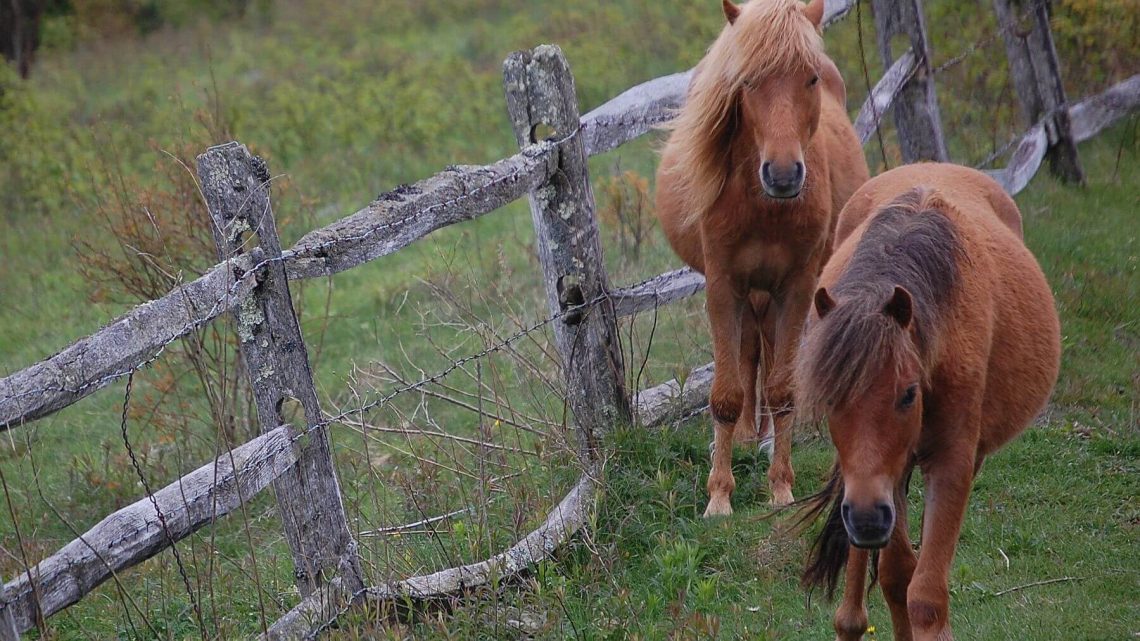 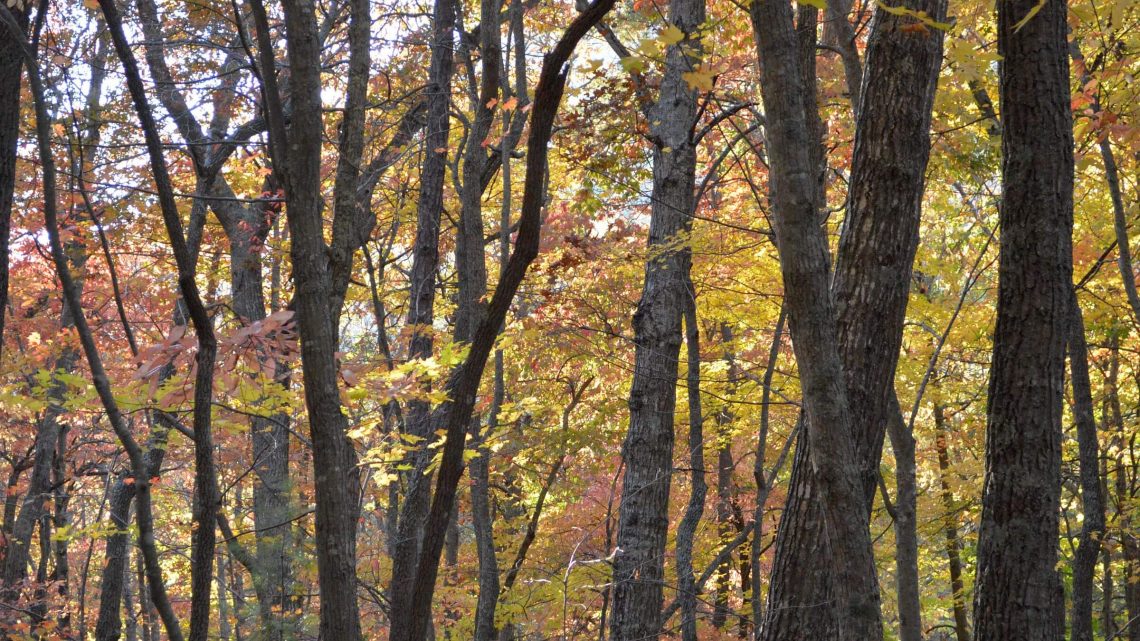 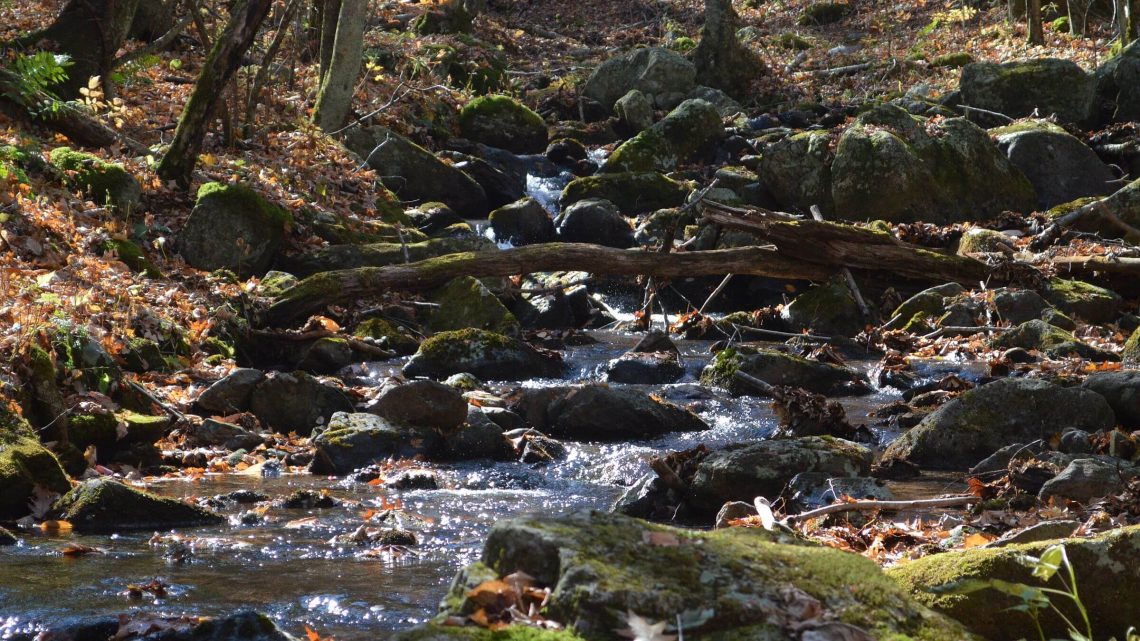 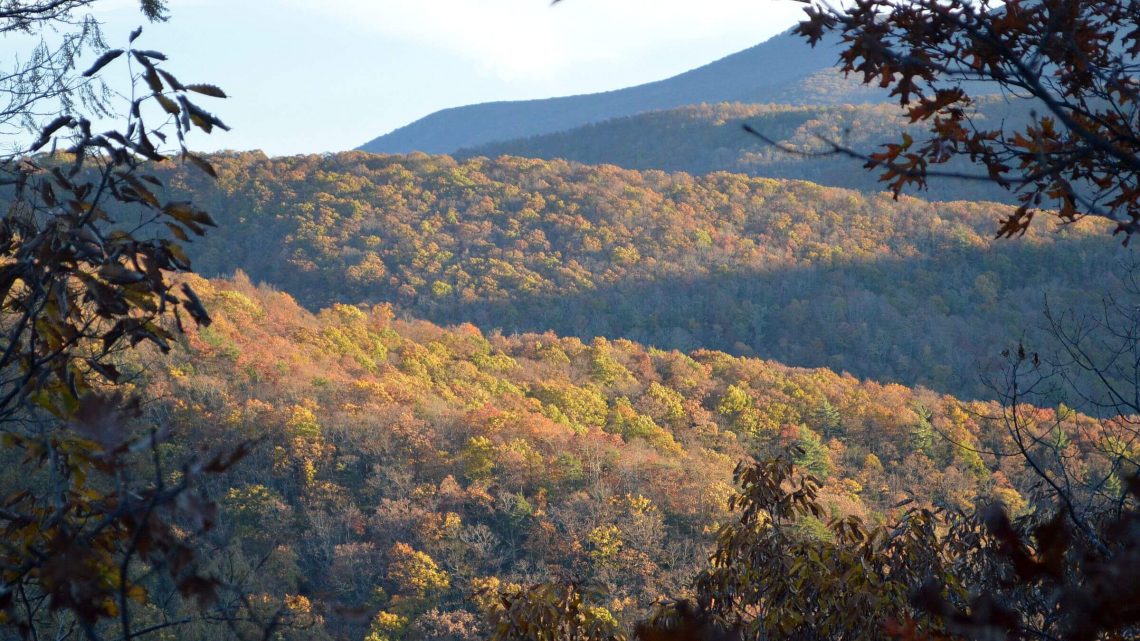 A mile into Little Wilson Wilderness, we were deep in wet leaves on an eroded trail.

Jackie Street Trailhead was well marked from the road and a nice walk through a gate and past cattle in a green pasture. When the road headed for the woods, it deteriorated. Beneath leaf cover it was rutted and rocky. At the wilderness boundary, it narrowed, steepened and worsened. It took two hours to hike 3 miles to the ridge. The culprit for ruts/washouts was horses—lots of them.

Little Wilson was the third of four wilderness areas we visited in Mount Rogers National Recreation Area (NRA) in October 2014. Three had some heavy horse use; the fourth was overused by hikers. We drove from wilderness to wilderness starting with Little Dry Run. We might have been able to do a backpack loop among three and possibly all four using the Appalachian Trail (AT), a horse trail and secondary roads, but were hampered by limited time and confusing maps. Instead we did short trips to cover as much area as possible in each wilderness during our allotted week.

Our first visit was to this small isolated wilderness that seemed used only by locals. We were joined at the trailhead by a bow hunter who looked surprised to see backpackers. “There are bears up on the ridge,” he said ominously. “Cool,” I replied, which appeared to disappoint him.

We crossed roaring Dry Run—not dry at all—then climbed over a ridge and met spring-fed Little Dry Run. The trail met an old road which continued up the creek. Horses had made large holes in quicksand-like soil, which made the poorly marked trail easy to follow. The sun set on the creek but illuminated golden hickory and oak on the ridge above. Eastern white pine appeared to be replacing fallen hemlock killed by woolly adelgid.

Morning cold air drainage in camp made the climb to the wilderness boundary on the ridge quite welcome. We visited Comers Rock—a beautiful overlook outside the wilderness—and Jones Creek drainage to see the Forest Service proposed addition that would double the wilderness size.

The horse trail (road) on the wilderness boundary was boggy and eroded along impressive West Dry Run Fork, which had many falls and riffles. Two riders waved vaguely as they overtook us at lunch. Further down, a spectacular waterfall from a tributary creek plummeted into a narrow chasm outside the wilderness.

Below the head of Raccoon Branch, the boggy, trampled Virginia Highlands Horse Trail (Horse Trail hereafter) made me glad we had skipped this creek route into the wilderness. We had arrived the day before in late afternoon at chilly Raccoon Branch Campground and decided not to hike the Horse Trail up a cold air drainage already in shadows.

Instead we came in via the AT from Dickey Gap. We took Hickory Ridge Trail paralleling the AT, unmaintained and steep but offering views of bright-yellow hickory accentuated against red-brown oak. We rejoined the AT and the Horse Trail at a saddle and camped on the ridge beneath a starry sky.

The next morning we explored the basin at the head of Raccoon Branch via Bobby’s Trail: a spring and a trashy camp with a decrepit picnic table, an ancient wooden toilet, and a broken grill. A half mile down we met the Horse Trail rutted by wet weather use.

After returning to camp to pack up, we took the AT north to the wilderness boundary and beautiful Trimpi Shelter half a mile beyond. The high ridge offered views of many Blue Ridge peaks to the southwest.

On return we tried to find a trail (shown on map and at trailhead kiosk) that descended into wilderness on Mullins Branch, but we soon lost the faint tread in leaves and found no blazes to guide us. We also skipped Dickey Knob Trail and the Horse Trail, so our visit did not cover the entire wilderness.

I later learned the run-down camp at head of Raccoon Branch was an old AT shelter destined for removal as it did not meet Forest Service (FS) criteria for “wilderness character.” FS does not maintain Mullins Branch Trail but said hunters use it; it may be downgraded to “route” on the next map edition.

Since Dickey Knob Trail is a good wilderness access point, a trail should be constructed linking the Knob to Mullins Trail which should be restored to increase hiking/backpacking opportunity.

This area was the worst for horse overuse, although Jackie Street Trail did improve at the ridge. We camped off a meadow near the junction of First Peak and Bearpen trails. We had planned to take Bearpen on a loop through the wilderness the next day. But a sign warned against using this trail in muddy conditions. Given the previous day’s slog to the ridge, we decided not to use it at all! Instead we did two out-and-back day hikes to explore.

First a cold windy out-and-back hike over Second Peak for views of Pine Mountain in the adjacent Lewis Fork Wilderness and up Third Peak with no views. Next, we followed First Peak and Kabel trails to Little Wilson Creek, where we found striking meadows and campsites. The splendor of the area made me a bit wistful for my backpack, left a few miles back at the junction.

Leaving wilderness on Hightree Rock Trail was a nice surprise: a gentle little-used grade down from the ridge. The route used to be a small-grade railroad built to haul timber to a landowner’s mill on Fox Creek. Hightree Rock was well marked with great views of Mill Creek valley.

The next morning we discovered the cause of erosion on our access trail. We had dropped to the road that linked back to Jackie Street Trailhead. We passed a spur trail which (according to the map) linked back to Jackie Street. Right across the road from the spur was a sign, “Rocky Hollow Horse Camp.” Hoof tracks indicated the source of overuse on Little Wilson trails. (See Links for more on this camp, which has a special use permit with the Forest Service.)

Wild ponies, thru-hikers and rain dominated our visits in June 2000 and May 2011 to this exemplary wilderness of high alpine meadows and spruce-fir. Our October 2014 revisit was filled with sunshine and many hikers visiting Virginia’s highest peak—Mount Rogers—where trees block views. However, 5000-foot ridges leading up to the peak offer wide open vistas and alpine grandeur.

We had morning solitude on obscure Grassy Branch, an old logging railroad grade on the northwest corner of the wilderness. Then we drove on to Elk Garden trailhead for an overnight backpack trip on some of the few trails we had not yet hiked in this area.

Elk Garden also doubles as an AT crossing point, so we met several hikers. After passing a backpacker couple taking selfies at the trailhead, we returned to solitude on Helton Creek—skipping a gorgeous creek side campsite because we wanted to camp higher to expediate the loop around Mount Rogers the next day. Sadly, we had to settle for a sketchy hillside camp but it offered glowing sunset views of the ridge with grey, pink, and blue highlights in a sliver of storm clouds. The storm threat abated and sun came early to the basin.

The next morning we climbed to the Horse Trail and on to Deer Gap—a lovely site closed to camping apparently from overuse. Blue markers led a quarter mile down to a little spring. We left our packs and took the stone-step switch-backing AT to the ridge through dark, sweet-smelling Fraser fir.

The view opened up on a meadow with our planned return route far below. We began meeting southbound AT thru-hikers and visitors from nearby Grayson Highlands State Park where a section of the AT offers high-ridge access to Mount Rogers. One hiker was dazed by multiple paths on the ridge. At the AT Thomas Knob Shelter, four loud guys had strewn gear all over the picnic table. We passed many campsites in the grassy spruce-fir, often trampled from overuse. The green ridges, fir smell and harsh wind reminded us of the Rockies or other western mountains. A rock outcrop offered views of Pine Mountain, Wilburn, and high ridges above Lewis Fork and Big Wilson creeks.

After a chat with an Australian thru-hiker, we left the AT and cut down to the Horse Trail outside wilderness on a rocky path that showed recent waterbar work by a small machine. Two more Grayson hikers—one carrying a small frightened dog—had missed the AT turnoff to Mount Rogers. We helped them find their bearings on our map. We saw ATV tracks around and below us, although signs and maps banned motorized vehicles from all NRA trails.

We finished our loop on the AT and talked briefly with curious thru-hikers at the trailhead.

Although Mount Rogers NRA has more than 500 miles of trails, it seems most hikers are channeled onto the AT near the top with side trails underutilized; while parts of the Virginia Highlands Horse Trail and other routes could use better management of equestrian activity.

These visits are not mapped because we were unable to recall our 2000 route (which started at the Fairwood Valley/AT trailhead) or correlate it well with camera dates on photos, while most of our 2011 visit from Grayson Highlands State Park Trailhead was outside wilderness. So we have instead included photos on the map below at trailheads for these trips.

Photos and rusty memories of a June 2000 visit indicated that our first 3- or 4-day Mount Rogers visit started on the AT and wound its way up one of several trails to Mount Rogers through boggy meadows and rhododendron brush on an overcast day. A midday rain found us with a dozen AT thru-hikers at Thomas Knob Shelter. We recall a quick half-mile jaunt to Mount Rogers summit in drizzle but no view because of clouds and thick spruce-fir.

Rain quit and we hiked the AT across a swatch of Grayson Highlands. David wanted to camp on an open ridge against some rocks; I wanted to push on to the AT Wise Shelter. He prevailed, we made camp, and after sunset heavy rain arrived—soaking our equipment and blowing the tent around.

The next morning we left a cold wet camp and found a dry, empty shelter within about an hour.

In May 2011, we started at the popular Wilburn Ridge Trail from Grayson Highlands for an overnight trip. Beginning late afternoon under threatening skies, we passed a herd of spotted and dappled wild ponies just before Thomas Knob Shelter.

The shelter already hosted thru-hikers, some partying in the loft. We set up in the lower level and left for the viewless hike to Mount Rogers. This time we at least found the “official summit” using GPS.

On return, more hikers had come and it started to rain in earnest. Hikers arrived through the evening; some crowded in and others went on. Most complained about days of rain and exulted over the “cute” ponies.

Later that night a few ponies began terrorizing the shelter, taking big bites of the wood until someone yelled; they would trot off and then return. Finally one apparently pulled a hunk of wood off a side of the shelter, dislodging hiking poles that fell with a great clatter from where they had been leaning against the wall. With screams and whinnies, the ponies departed, leaving us in peace until morning. The same could not be said for partiers upstairs or a pair of late night arrivals who set up bags next to us, crawled in and commenced horrendous snoring. A light sleeper, I would probably not survive thru-hiking the AT if shelter stay was required.