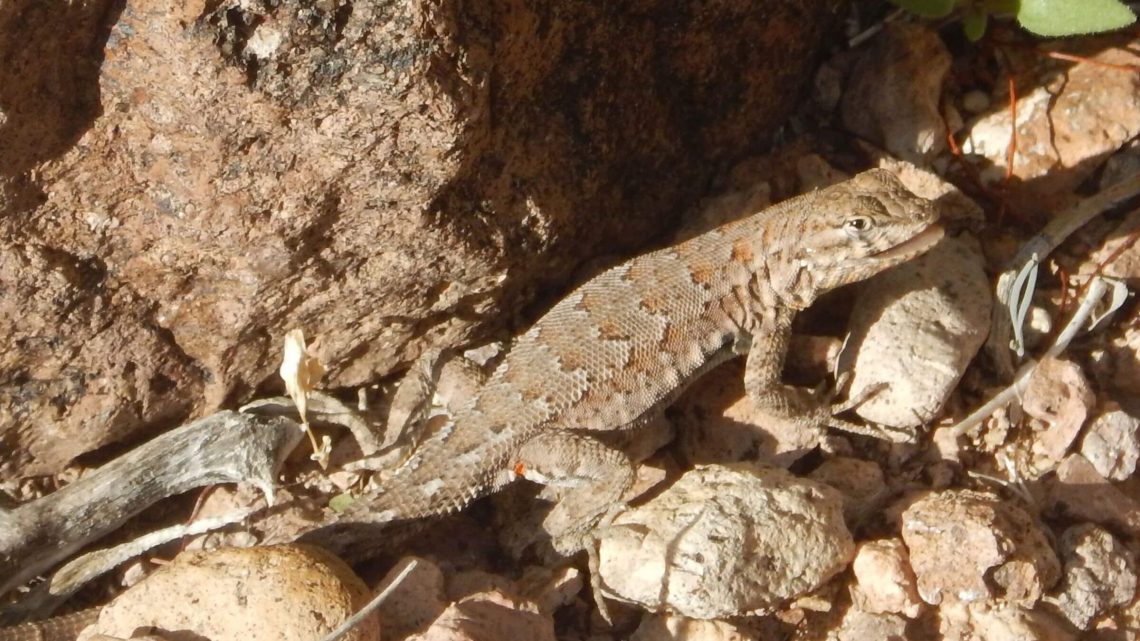 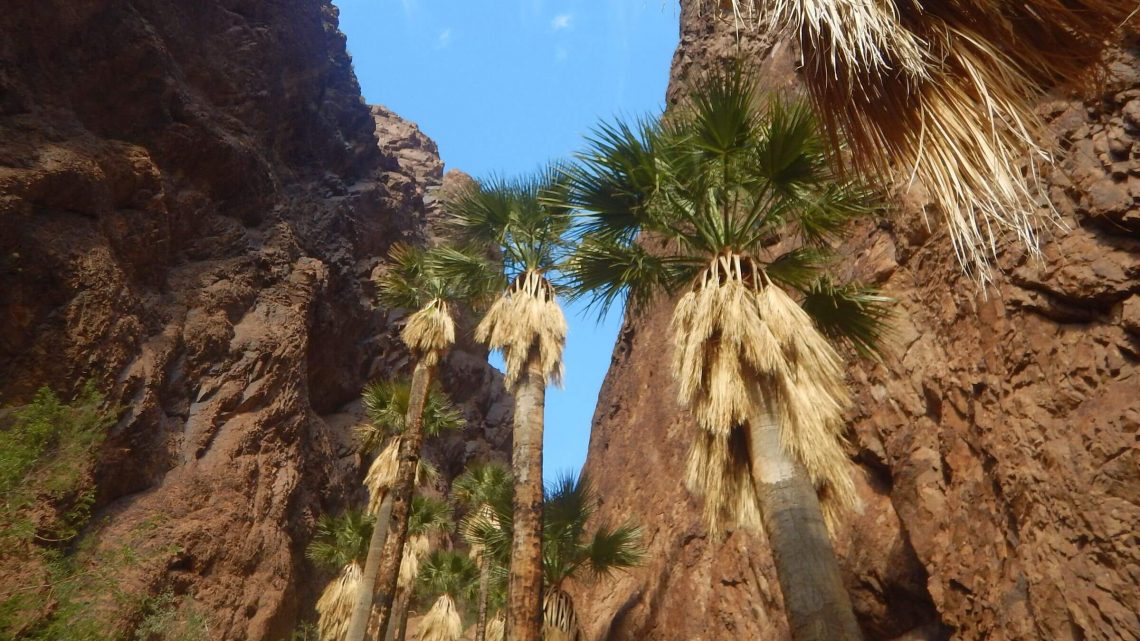 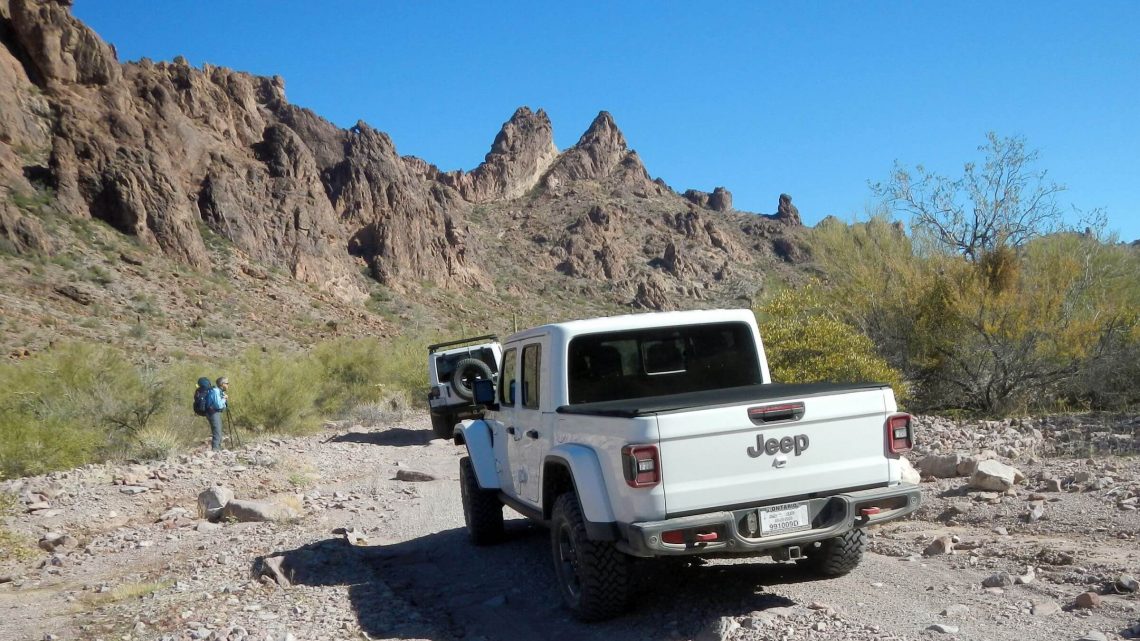 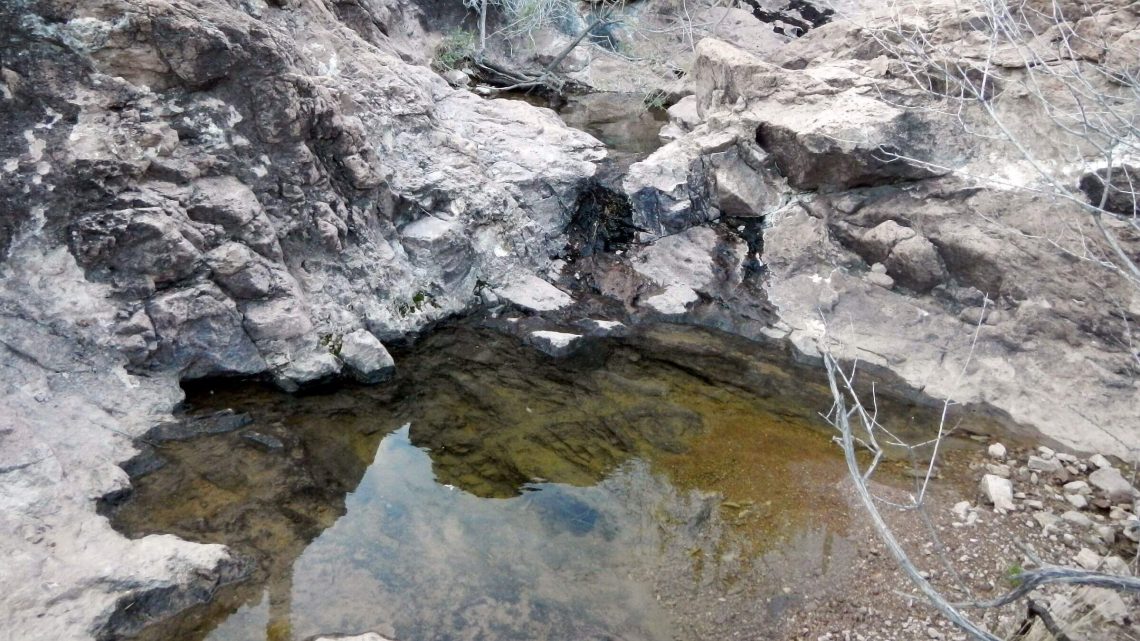 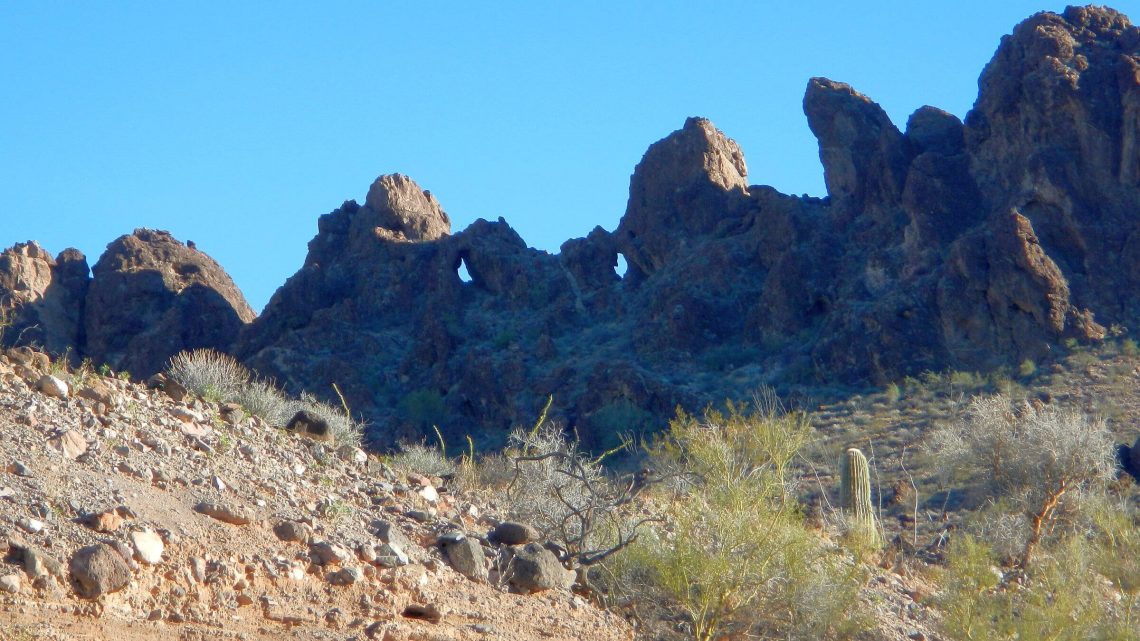 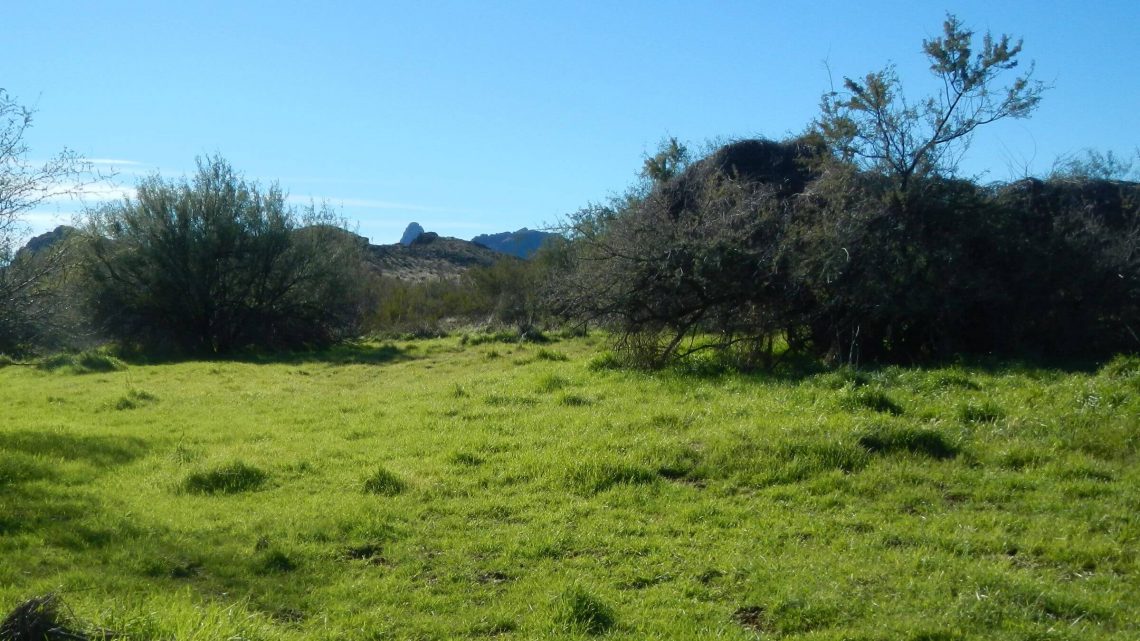 Alone in wilderness quiet, we broke camp and started a few miles cross country—over a hill, into a wash, and over another ridge into upper Red Raven Wash while skirting overhanging mesquite trees. A hawk dived down—maybe hunting a jackrabbit, the main wildlife we saw in Kofa Wilderness. David saw a tawny figure loping on the ridge above us—coyote? Perhaps a cat, indicated by a big paw print in a nearby wash.

Another ridge, then a rough descent into Burro Wash to follow gravelly vehicle ruts. We needed water for breakfast but found no pools as we trudged down the wash. David’s GPS showed a turnoff and trail up to a tank nestled in a side canyon. High Tank 7 featured deep pools protected by a shade structure and a log dam. Wood must have been packed in—most roads in wilderness are open to motorized vehicles for maintaining wildlife tanks.

We were just finishing breakfast when we heard jeeps roaring up the wash. People piled out of two vehicles, greeted us and headed up the trail to the tank—the only trail we found in this wilderness (other than the one mile Palm Canyon trail on the west side) and apparently a day trip destination.

We saw more people and heard more vehicles on a 2020 backpack trip in the Kofa than we did in a previous trip circuiting the entire area by jeep!

In the December 2018 trip, we had driven north to south through the wilderness, making short forays into the interior and packing all water, an unnecessary precaution as it turned out. Heavy October rains had left ample water in potholes, filled Wilkinson Seep to the brim and created early bloom of cactus, brittlebush and desert poppies. We had seen one vehicle parked near Wilkinson Seep and only had encountered one other group driving through wilderness—no people on our backcountry trips—and just a few vehicles near north, west, and south entrances.

Kofa Wilderness is Arizona’s 2nd largest (500,000 acres) and managed by U.S. Fish & Wildlife Service (FWS) which seems to mostly ignore the purpose of wilderness according to the Wilderness Act of 1964 (…“for use and enjoyment by American people”)—except for hunters and Universal Terrain Vehicle (UTV) enthusiasts. FWS offers no information on backpacking or water sources, and only maintains one mile of trail into Palm Canyon. This post covers visits in 2020 and 2018.
About 240 miles of primitive road crisscross Kofa Wilderness; 38 percent are along wilderness boundaries while 62 percent are cherry-stemmed within wilderness. FWS uses these roads to manage desert bighorn sheep water sources (tanks and wells) but they are also open to the public.
Our first 2018 visit was a “check-out” where we drove 92 miles of road through the heart of the wilderness and backpacked 5 short loops—carrying most needed water (on advice of FWS). We made short loops on closed/open roads, washes, or ridges between roads. But we learned that the Kofa offers ample water in rocky washes following substantial fall/winter rain, and is quite easy to hike cross-country in washes or across moderate terrain; in addition, many sheep trails cross passes and old closed roads shown on USGS topographic maps, and make excellent routes because the harsh Sonoran Desert environment preserves even the slightest disturbance for decades.
The 2020 visit was a 6-day backpack into the northwest end of the wilderness that connected open and closed roads with cross-country routes. Excellent water sources included Squaw Tank, High Tank 7, Red Hill Tank, Wilkinson Seep and a few rocky-canyon pools along our route. Some tanks were natural pools in rocky shaded canyons, others were “improved” by FWS; see map photos for details.
Visit statistics for both trips: 13 days, 127 miles at 2.4 miles per hour, and 200 feet average elevation change per mile.
See map below for detailed routes, mileages, elevation changes, and photos.

The name “KOFA” is from the King of Arizona Mine in the center of the wilderness, which scoured the area for precious mineral deposits in the early 1900s; old tracks and mining sites remain.

The Kofa National Wildlife Refuge was established in 1939 to protect Arizona’s largest desert bighorn sheep population. The area had numerous concrete dams, windmills, and water tanks, some built for previous mining and ranching. Some have deteriorated; others are maintained by the refuge staff for wildlife water needs. About 82% (550,000 of 667,000 acres) of the Refuge was designated wilderness in 1990, making it the second largest wilderness in Arizona. (The largest is Cabeza Prieta, another wildlife refuge made wilderness in the same law.)

Fall 2019 provided good rains in Arizona so we decided to try a Kofa backpack in January 2020. The Fish and Wildlife Services biologist agreed we’d find enough water in springs and canyon potholes. Most of our loop would be in the western and northern parts of this wilderness—which turned out to be more popular than the areas we visited in 2018.

The 2020 trip started on Palm Canyon Road, popular for informal “snowbird” camps. We left our vehicle at a pullout and scrambled north, crossing washes and rocky desert for 2.5 miles to Kofa Queen Road. On this route along a wide wash into the mountains, we met many day-use jeeps. We dropped our packs at Ten Ewes Canyon where a good route marked with stone markers (cairns) climbs to Signal Peak, highest in the wilderness at 4877-feet elevation.

Our day trip to Signal was unsuccessful; we had started too late in the day and had to turn around halfway. We camped in a nice flat across from the “trailhead.” A vehicle woke us the next morning: early morning peak-baggers parked across from camp.

We hiked road to the old mine site and a welcome closure. We had solitude all day on a closed jeep route to a small pass, a brief descent to a wash and then a sheep trail to Squaw Tank: beautiful pools among rocks. A slog down a wash brought us to the Wilbanks Cabin and windmill (we did not find an open tank), then to Wilbanks Road over Bighorn Pass to camp near some potholes where we also had found water in 2018. At sunset, a pickup clambered up the wash, parked awhile, went on up the road and returned after dark.

After our cross-country trek to Burro Creek, we were on High Tanks Trail and boundary roads and saw many vehicles. The next day we got water at lovely Red Tank pools and hiked a lesser-used road where we saw 3 vehicles total, including a bow hunters’ jeep parked near fenced but dry Jasper Spring (FWS warned this spring might be dry). We soon turned off on a closed road that looped back to Wilbanks Road with no vehicles nor tracks. Back on Wilbanks Road near Owl Head formation, a fleet of UTVs raced down the Alamo Wash past us. We camped near Wilkinson Seep, with less water than during our 2018 visit. Potholes a little further down the wash actually offered better water.

The next morning we saw only one vehicle, a hunter in a pickup truck on Wilbanks Road. We saw no one else once we turned off into the wash we came in on. However, on the far side of the low pass into Kofa Queen, the closed road had been illegally “reopened” by a jeep group; they had forged a route past the closed gate and added rocks and logs to aid vehicles in washed out areas.

Some factors aided our solitude on the earlier 2018 trip. Wilbanks Road, a cherry-stem road going north-south through the heart of the wilderness (built by a ranch family in the 1930s) is usually open to motorized vehicles. However, heavy fall rains had created a washout on the south end in 2018 so vehicles could not drive through. In 2020, Wilbanks Road was open; we saw evening hunters and encountered UTVs rushing down Alamo Wash, which the road follows for several miles.

Also we had done our 2018 overnights on the eastern and southern ends of the wilderness much further from the Quartzite area (where hundreds of thousands of migrant “snowbirds” from colder northern states reside in the winter in mobile-home housing tracts or Long-Term Visitor Areas [LTVAs] on public land). A restricted military area in the southeast also prevents through traffic. Our 2020 backpack loop used boundary roads on the northwest much closer to Quartzite.

If we came back, we’d check with FWS on which tanks might have water after a wet year, such as the many tanks in the remote Castle Dome Mountains shown on the refuge map, and plan a cross-country trip hiking between them.

Although we had followed their trails, we did not see any desert bighorn sheep on either of our visits to this wilderness devoted to their habitat. Either they are widely dispersed because of abundant water, or they don’t like vehicles either. In late fall 2019, friends of ours hiked beyond the one-mile trail into Palm Canyon and heard loud clashing from bighorn rams fighting at the head of the canyon.

The Kofa would be relatively easy to manage for backpacking. Old mining routes and sheep trails over passes could be marked with cairns and a few loops created. Viable tanks (some improved, some natural) could be marked on a map for reliable water after favorable weather conditions. And the big tanks maintained by FWS for wildlife could include a spigot for hikers. We also suggest closing most of Wilbanks Road and other cherry-stemmed roads to public vehicle use, allowing administrative use only. With increasing numbers of winter “snowbirds” residing temporarily in the area, UTV and jeep use may soon overwhelm this remote desert refuge and the wildlife it is supposed to protect.