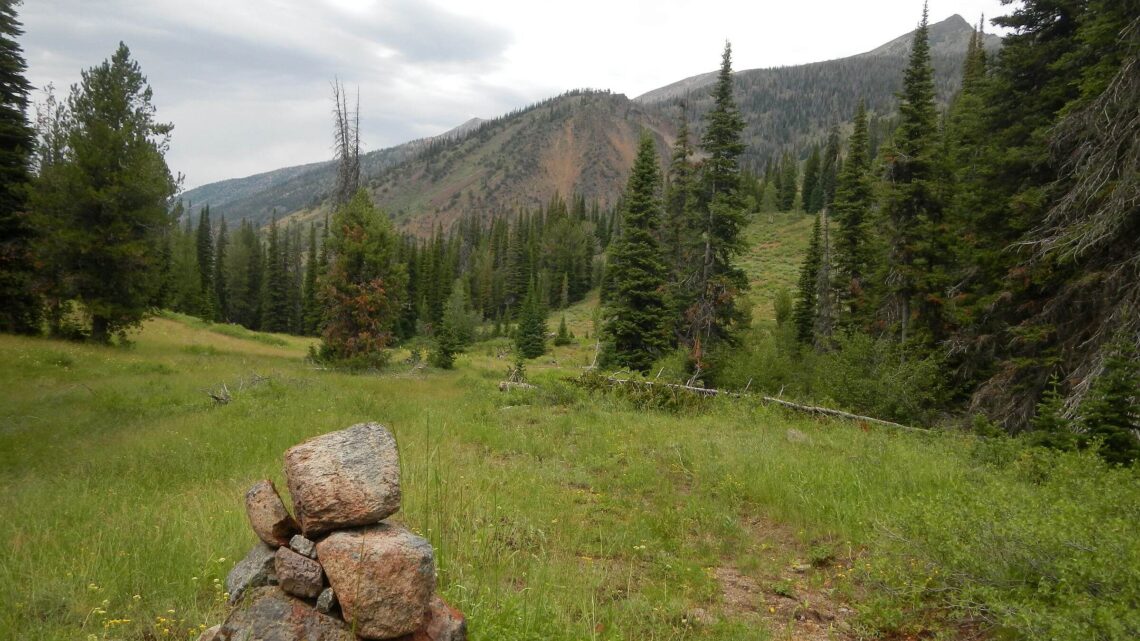 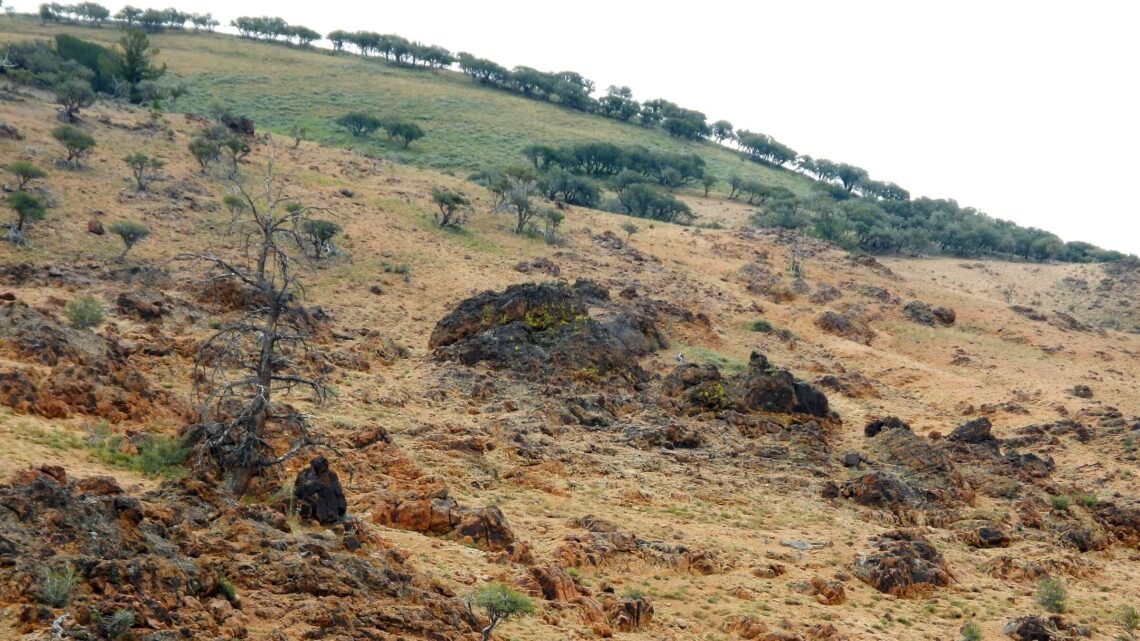 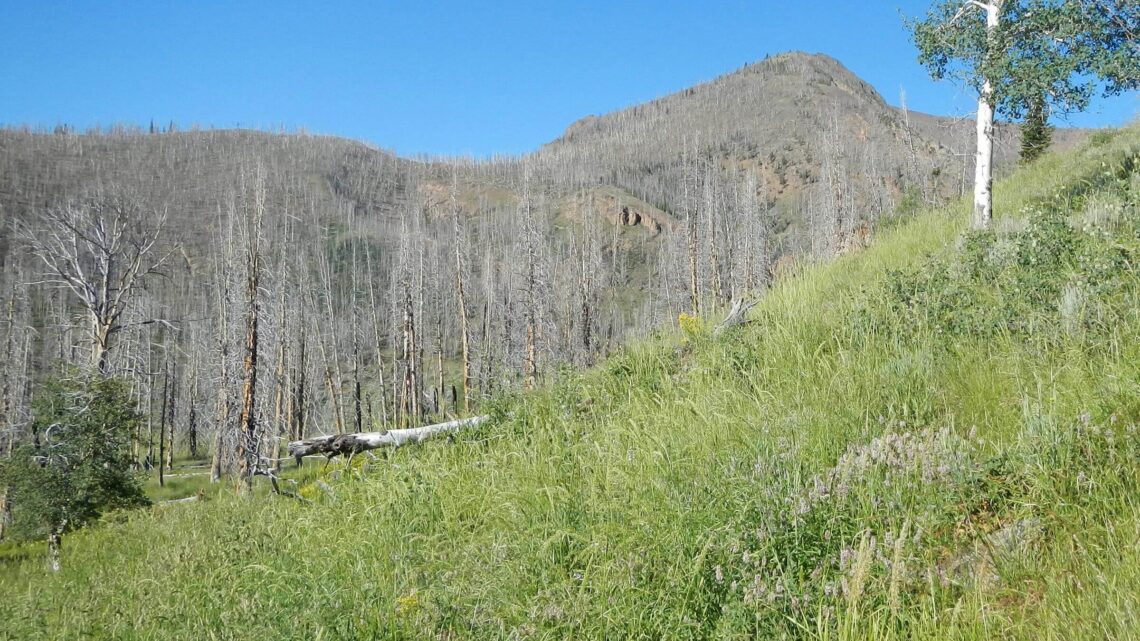 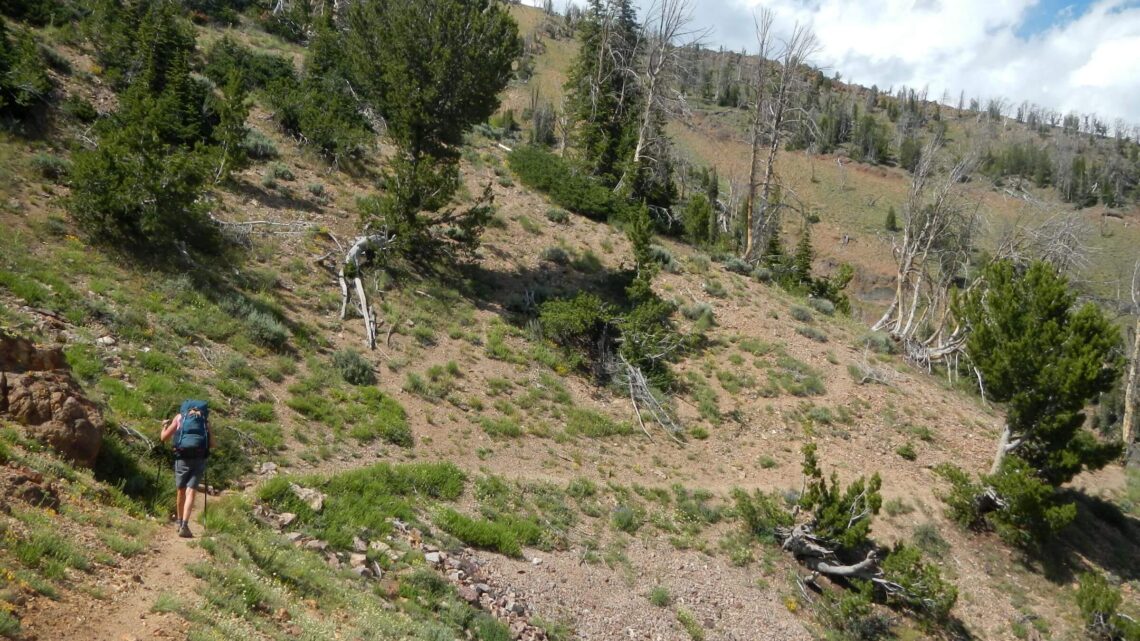 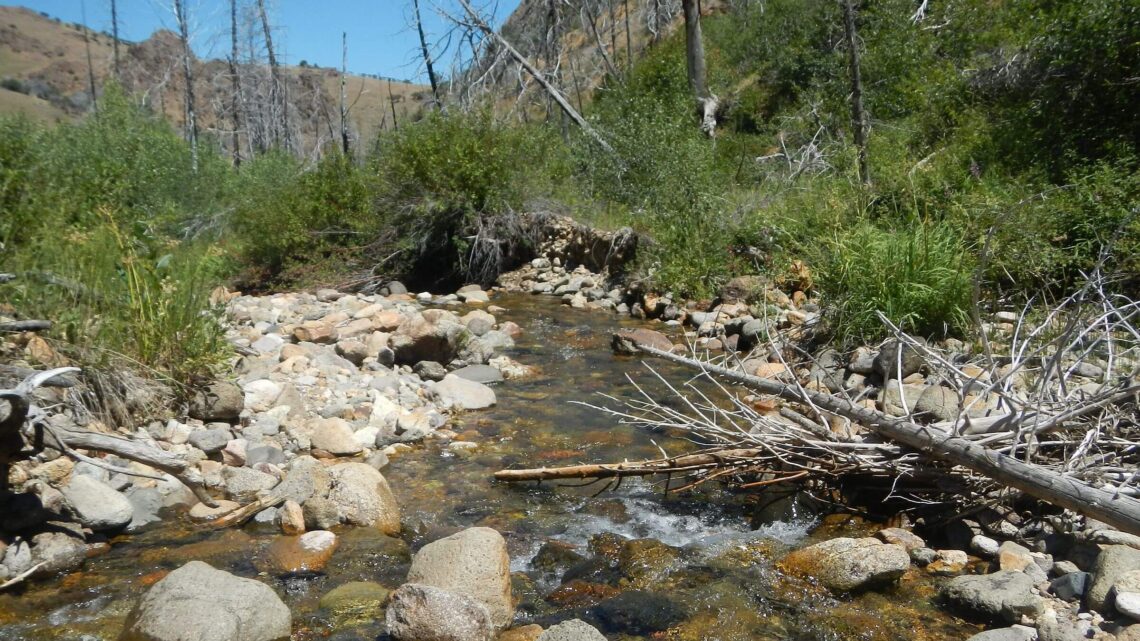 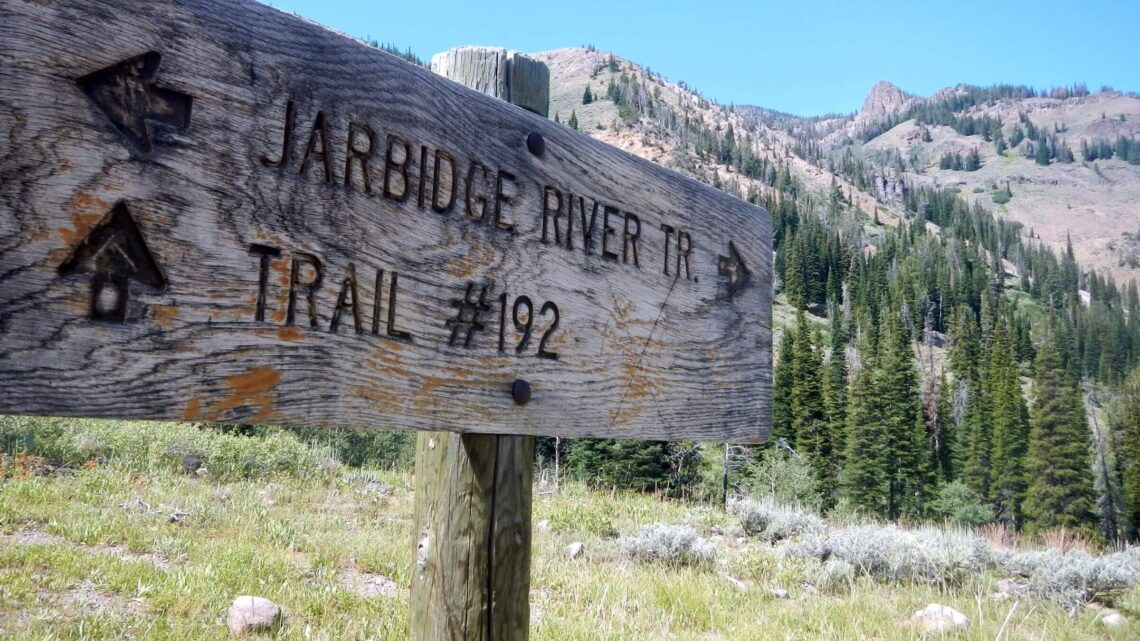 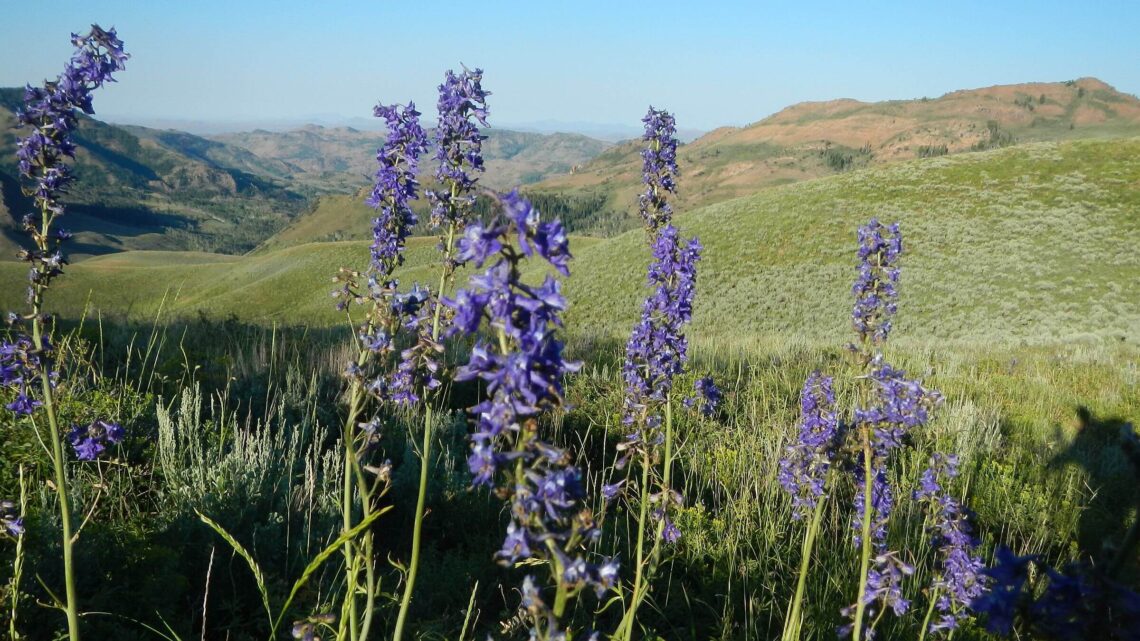 Three signs—two on the outskirts of Jarbidge, Nevada and one near our trailhead for a weeklong wilderness trip-illustrate the infamy of disputed but rarely visited Jarbidge Wilderness.

Ironically, the 113,000-acre wilderness we traversed for a week was a world apart from hard-scrabble town of Jarbidge and the protest that put this remote area in the national news. We didn’t see a single person after the first five miles in. Of the hordes of visitors and locals with Universal Terrain Vehicles (UTVs), few even travel the county-claimed “2477” spur that inspired the protest.

Waist-deep wildflowers, unusual associations of four tree species, surprisingly good trails, and solitude marked our second visit to the remote Jarbidge Wilderness in northeastern Nevada; our first was in July 1991.
Jarbidge is an oasis in the dry Great Basin. Unlike most of Nevada and Central Idaho, Jarbidge received ample snowfall in 2020. A Jarbidge River gauging station (see LINKS below) recorded less than 15 cubic feet per second (cfs) during our late July 2020 trip with fairly easy crossings.
2008 East Slide Rock Ridge Fire left many hillsides of ghostly white dead trees but with few adverse trail effects as post-fire erosion seemed minimal, outfitters cut major logs, and trails were kept open from vegetation takeover by stock (horses), wildlife, and domestic sheep.
Only backcountry visitors we met were two friendly Great Pyrenees dogs likely enroute to join their flock above Marys River Basin.
Elk—first reintroduced in 1990 and reported to number about 1,300 today—were seen in large numbers on our last visit but not on this one.
Visit statistics: 6 days, 62 miles, at 1.8 mph, and averaged 475 feet per mile of elevation change.
Go to map below for more information on trailheads, daily routes, mileages, elevation changes, and photos. (Click on white box in upper right corner to expand map and show legend with NAVIGATION INSTRUCTIONS.)

I worked for the Forest Service region that oversees Nevada national forests in the late 1980s and 1990s. (I even wrote the text for the map we used for our hike, a 1994 Jarbidge Wilderness map with pictures from our 1991 visit.)

Nevada was a hotbed of anti-federal sentiment. A ranger’s vehicle and an outhouse were bombed, a mob with a bulldozer reopened a road near Tonopah and cattle rancher Wayne Hage sued the government for $2 million after Forest Service officials impounded his cattle trespassing on national forest without a permit.

The Humboldt National Forest (administratively merged with the Toiyabe in 1995) had its main office in Elko, where county commissioners sparred with our officials and the local newspaper ran anti-federal diatribes. No big surprise in 2000 when the commissioners, whose county encompasses Jarbidge, decried a Forest Service decision to close a 1.5 mile section of South Canyon Road to the wilderness. The Jarbidge River had washed out a bridge and Forest Service officials thought repair work could harm bull trout, a threatened species that lived in the river.

Jarbidge residents and Elko commissioners rebelled. People from around the country sent shovels. On July 4, 2000, 300 protesters used shovels to pry away a rock blocking the road. The event gained national attention.

Forest Service and county officials battled in court for years. Elko officials claimed road ownership under Statute 2477. This 1866 law, stating that “the right-of-way for the construction of highways across public lands not otherwise reserved for public purposes is hereby granted,” gave counties and states a right-of-way across federal land when a highway was built. Subsequent law repealed 2477 but local governments still use it to try to assert control over federal roads.

The 2477 claim was never proved in court. However, the Forest Service granted the county an easement in 2018, which commissioners claimed as victory. Hence the green “2477” sign on South Canyon turnoff.

Native cultures used these mountains for centuries. “Jarbidge” is an anglicization of a Shoshone word that means “monster that lurks in the canyon.” According to legend, this creature was trapped by Shoshone warriors in a cave.

White settlers had more obvious impacts. After railroads accessed eastern markets in late 19th century, the cattle industry exploded. Besides 30,000 cows and many horses, some half a million sheep from Idaho overgrazed the area. Ranchers, hoping to stem the flow of migrant sheep, petitioned for designation of a forest reserve (predecessor to national forest) to control grazing.

Much early Forest Service work was grazing regulation and restoration of rangelands, reportedly “dust bowls” on the edge of the Jarbidge mountains. Soon after, gold discovered in Jarbidge Canyon lured 1500 miners. The boom town had dwindled to 55 residents in the 2010 census. But 100s of visitors—campers, anglers and UTV enthusiasts—swell the town in the summer, perhaps intrigued by the remoteness. “This is the only place to get a beer for 100 miles,” a waitress noted.

The Forest Service deemed almost 65,000 acres of high peaks the Jarbidge Wild Area in 1958. Jarbidge was among initial areas in the Wilderness Act of 1964 and gained another 48,500 acres in the Nevada Wilderness Protection Act of 1989.

South Canyon Road was fairly good for a mile or so and small campgrounds were in use. We parked at the last pull-out before the infamous washout, crossed the knee-deep river and hiked the road to its closure, passing a couple of parked UTVs. As we donned rain gear and hiked into wilderness on an old mining road on a rainy afternoon, we met two soaked couples hurrying back. A week later, we met one couple a few miles from the trailhead and one group of UTV enthusiasts.

Our trip is covered on the map below. We did a loop using available trails to cover as much wilderness as possible and experience the elevation diversity. We started up Jarbidge River, crossed into the Marys River watershed, traversed Gods Pocket Peak, hiked to the western wilderness boundary to reenter at Slide Creek Trailhead, descended to East Jarbidge River and hiked up to cross the main ridge of 10,000-foot peaks back to the main branch of the Jarbidge River. The best view of the ridge peaks was from the high plateau on the northwestern wilderness boundary.

Forests were quite unique: mountain mahogany scattered on the hillsides evoked the African Serengeti, but this species was also oddly mingled with pointy subalpine fir, whitebark pine, and aspen. Cottonwood and aspen often lined the rivers. With sparse tree fuel, the 2008 Slide Rock Ridge Fire did not burn too intensely, but there were numerous groves of fire-killed white snags on the high ridges and on stretches of upper Cottonwood, Cougar, and Slide creeks. Also, many whitebark pine and subalpine fir had died from insects, disease, and/or drought.

We enjoyed nice temperatures and only a few showers. Vast fields of waist-high flowers and some deadfall hampered trail-finding in some spots.

One difficult spot was on the East Fork of the Marys River, where a band of sheep (usually about 1,000) ahead of us had obliterated the river trail. Where trail left the river and headed uphill, we replenished our water supply, planning to make dry camp on the ridge above the sheep trampling.

Up the trail came two large white dogs: Great Pyrenees sheep guardians. They were quite friendly. This breed can be protective around sheep but apparently were off duty. After greeting us, the dogs continued up the canyon. We later saw them far above us, heading over the ridge. We thought we might see them and the sheep band the next day, but we did not.

Those were the only big animals I saw. (David saw a deer.) Jarbidge is known for a herd of 1300 elk; we smelled them a few times but they must have smelled us first. We saw grouse; hawks; chipmunks; small birds; and bats, darting in the full-moon evening near serene Emerald Lake.

We were confused by some trail reroutes not shown on maps. In the basin above Camp Creek we skittered side slope (where old cairn and GPS map indicated trail) before we saw a new trail coming up from below. We hiked through sagebrush cross-country because Slide Creek Trailhead had been moved across the basin. Our last day trail hike from Jarbidge Lake near the crest took longer than planned; the trail on the map shown dropping straight down from the lake was about tripled in length by many switchbacks across the basin.

The Jarbidge Wilderness has no trail crew except two seasonal wilderness guards, according to a Forest Service contact. Outfitters clear trails, said Lowell Prunty, who operates Jarbidge Wilderness Guide and Packing out of Murphy Hot Springs. He has been clearing trails on the north end since the Forest Service lost its trail crew years ago. He uses traditional tools required by wilderness rules including a cross-cut saw and axe. (Two other outfitters operate on the south side of the wilderness. They may do some trail clearing also but I could not confirm this.)

Prunty was surprised to hear about Great Pyrenees away from the sheep herd. His theory: “Perhaps they chased a cat (cougar) down the canyon and were coming back to the band.”

After our trip, we stopped in Jarbidge town for a hamburger. At the Outdoor Inn, the only restaurant open, about 30 people had jammed inside (none with masks for slowing COVID-19 spread). We chose an outside table on the wooden walkway; as we waited for our meal, UTVs and Jeeps poured through town. Elderly locals strode around, packing pistols in holsters on belts filled with gleaming ammunition cartridges.

I was glad they left the wilderness to us.