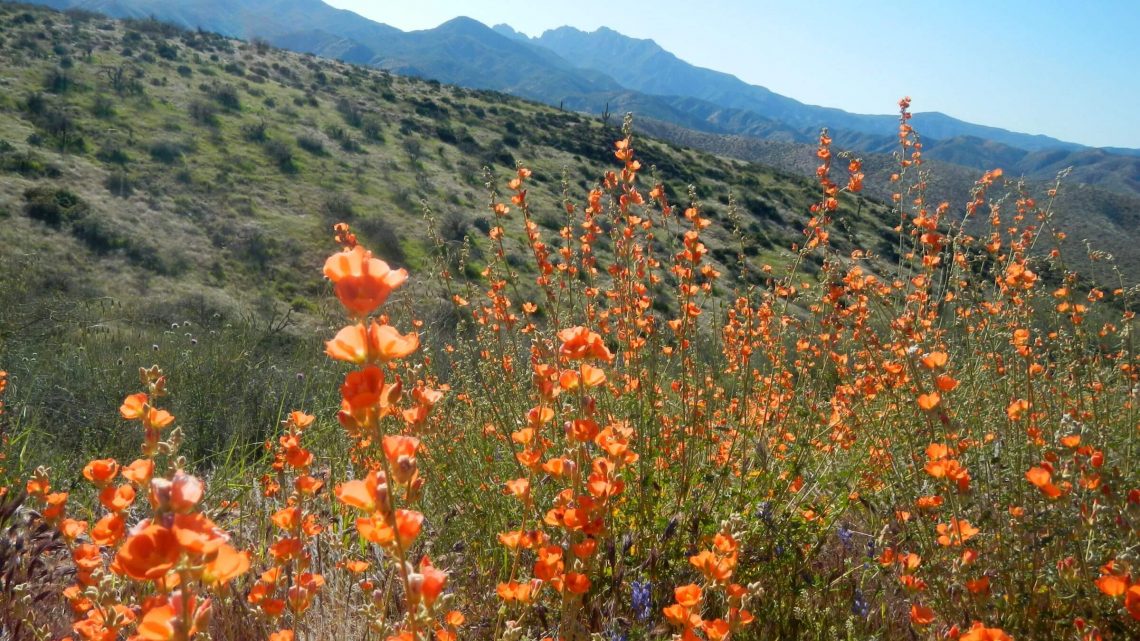 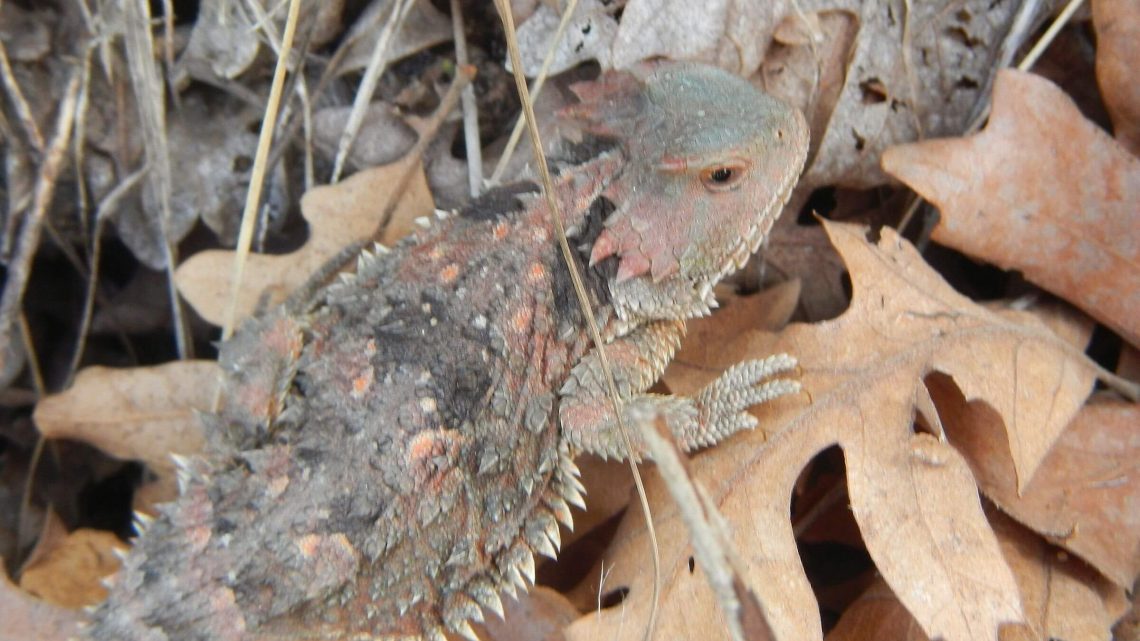 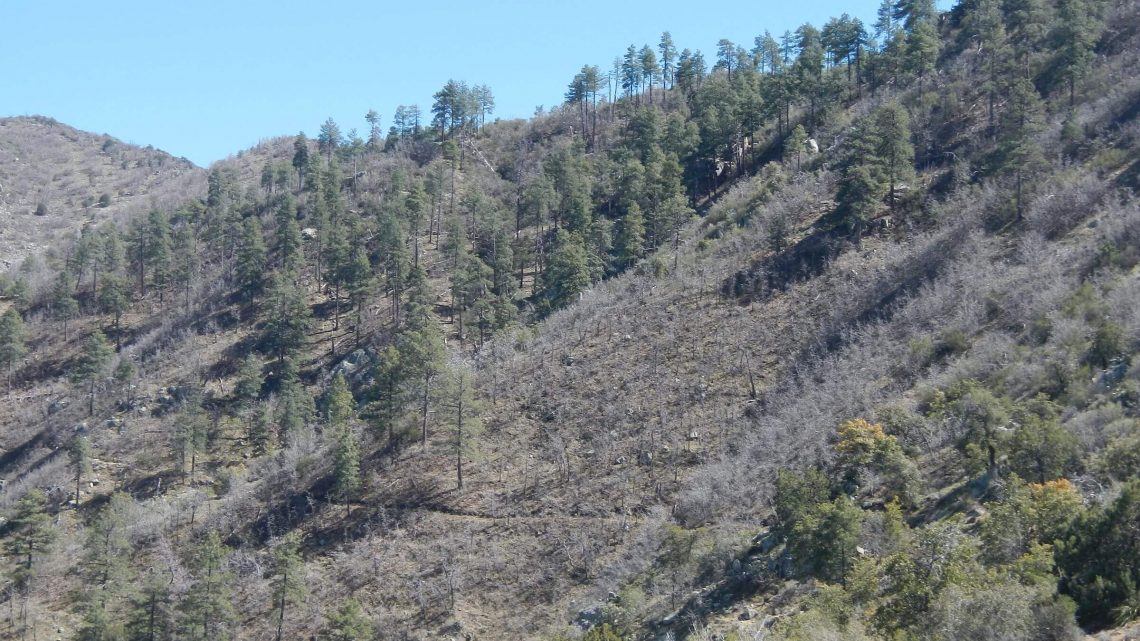 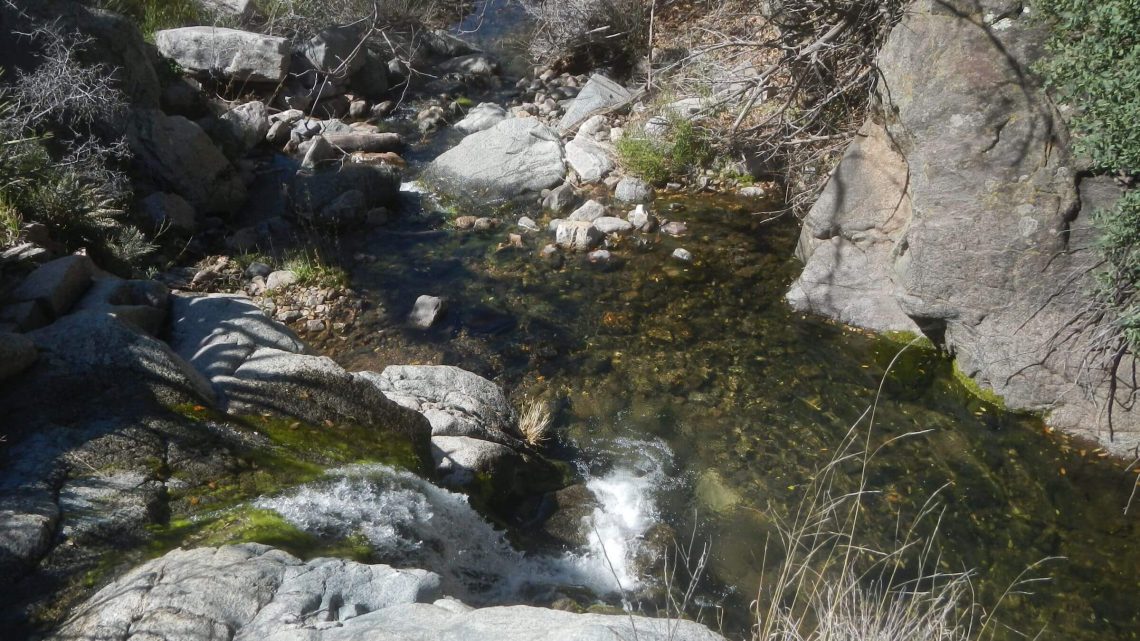 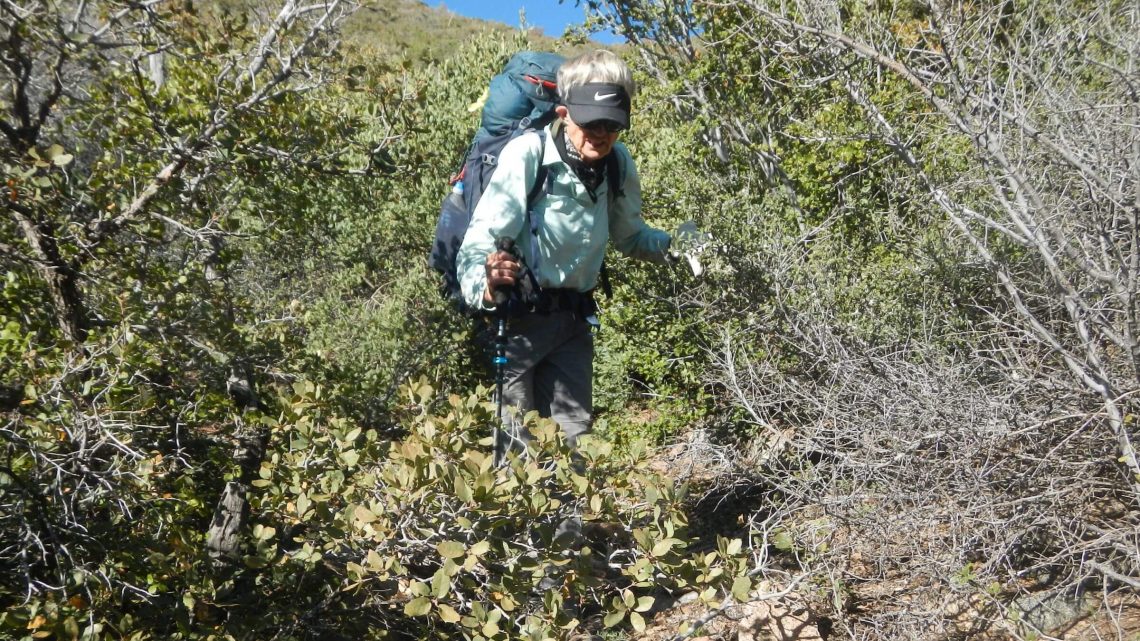 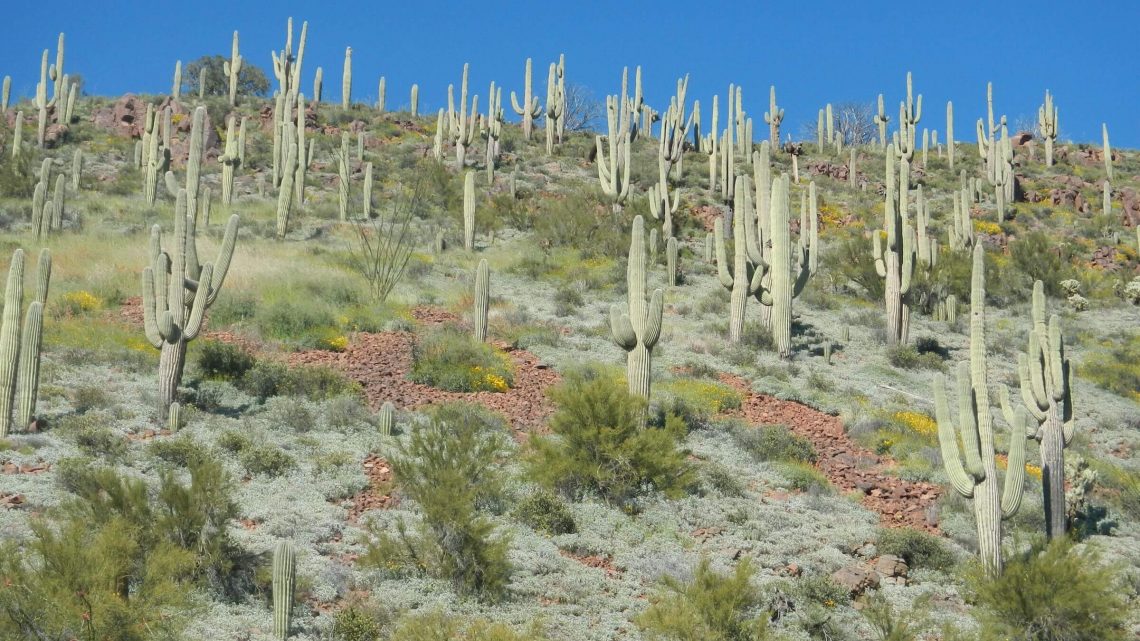 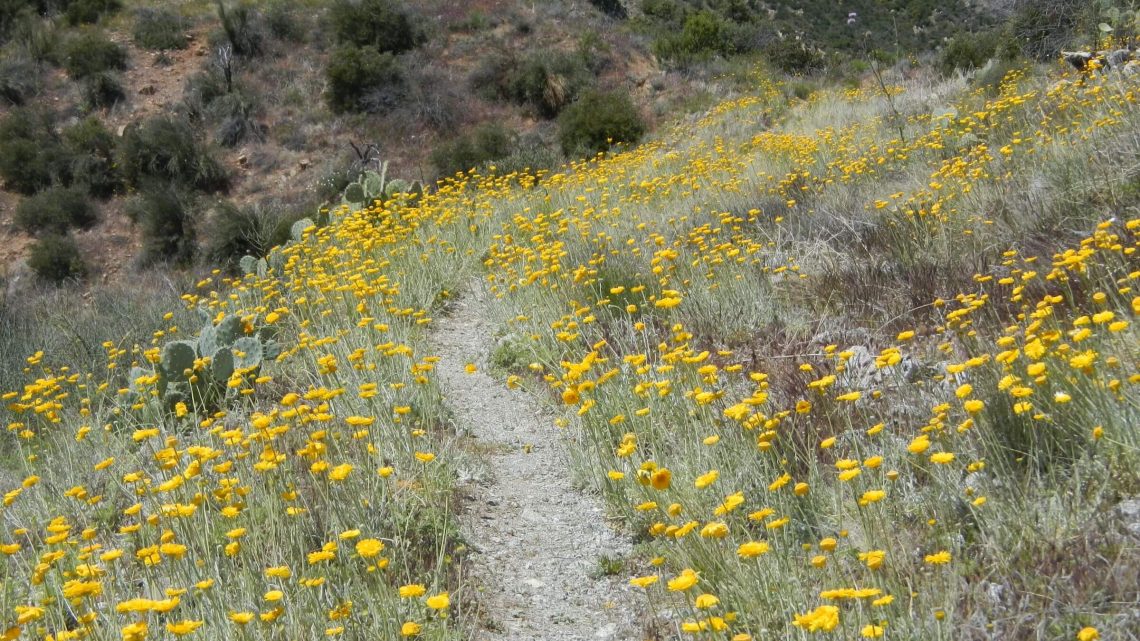 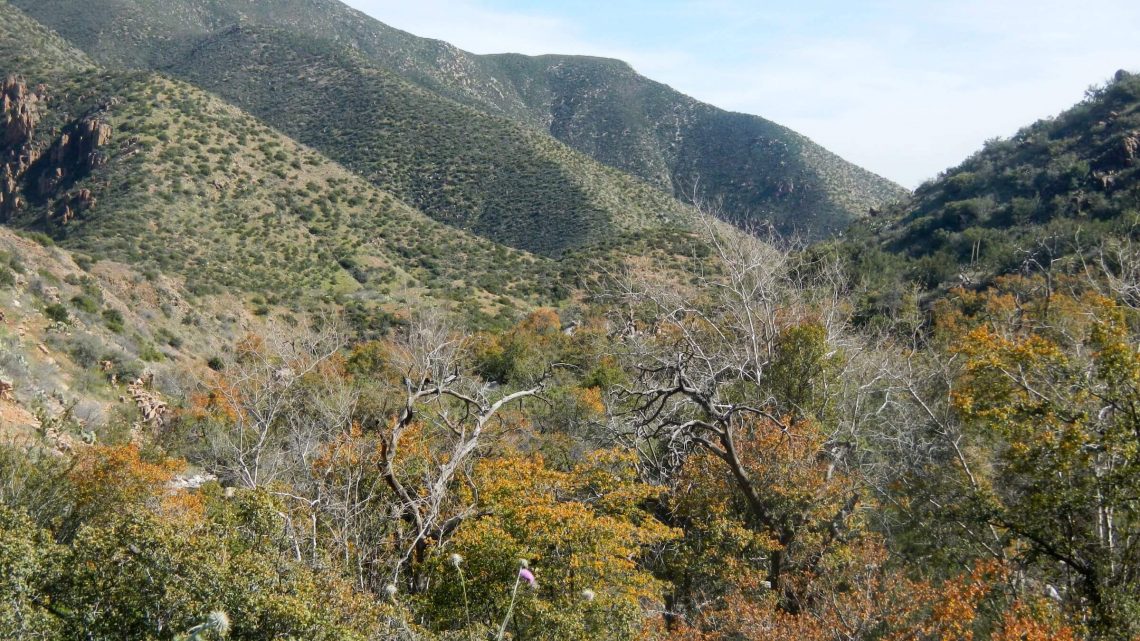 Two days into Four Peaks Wilderness, we had to accept defeat.

Our plans to loop the well-known peaks visible from Scottsdale, Arizona, were foiled by postfire vegetative regrowth, unreliable information, and neglect.

The trip started at the Arizona Trail (AZT) Roosevelt Lake Dam trailhead on a Saturday afternoon in early April, the day before Palm Sunday.

The trailhead parking lot was packed. We met families and couples returning from a day hike as we toted heavy backpacks up Vineyard Mountain Trail. Many showed concern about COVID-19 virus spread by wearing masks and turning aside off the trail as we came up. David and I pulled up our bandanas like bandits, our social distance hiking method.

The day was cool and sunny, flowers were out in abundance, and Vineyard Mountain Trail soon offered views of rugged grey peaks looming ahead. We were excited to check out a new area.

I had climbed Four Peaks once as a university student in 1997, camping near the peaks and spending a day scrambling their heights.

Hike Arizona, a commercial online hiking guide, and the Tonto National Forest website described Alder Creek Trail #82 leaving the AZT at Bear Saddle. We planned to use this trail and a series of northbound roads and trails to loop around the peaks to reconnect to the AZT for our return.

We got off late and made it to first water, Buckhorn Creek, at nightfall. The next day we climbed and contoured to Bear Saddle where our loop began.

Or rather, where our loop ended after two days of thrashing through manzanita, ceanothus, mountain mahogany, evergreen oak, and acacia along beautiful Alder Creek.

Thanks to four fires over 20 years and no trail maintenance, Alder Creek Trail was no more—and so was our plan to hike around the Four Peaks. Although we may have done the worst part of the route, we weren’t sure, and feared another two days of slow bushwhacking—particularly because water was uncertain after leaving Alder Creek.

Four Peaks Wilderness backpack was planned as a loop around the iconic peaks east of Phoenix but defaulted to a mostly out-and-back trip on Passage 20 of the Arizona Trail (AZT) with a short loop on top.
Lone Fire of 1996 burned most of the wilderness. The 61,000-acre fire, largest in Arizona (before new millennium mega-fires), was started by a careless camper at Pigeon Spring. Three other fires since 2000 have burned other portions of the wilderness. Most conifer was removed in the fires and we saw no regrowth of these species 20 years later, although nice pockets of remnant pine and hardwoods exist in some drainages.
Our April 2020 visit was an attempted loop around the peaks: entering on the AZT, heading down Alder Canyon, and planning to circle peaks via roads and trails back to the AZT on the north end. We gave up after a full day and 3 miles, thrashing brush on nonexistent trails in the canyon. Instead we went north on the AZT, did a short day hike near the peaks, and returned on the AZT, a forest road, and Arizona highway 188.
Ambiguous information and no postfire trail maintenance were the main barriers to this wilderness visit. Forest Service, a commercial trails website, and a commercial wilderness map all indicated Alder Trail #82 existed. However, we did not fully grasp how poor the trail was until after hiking it; then with post trip information, we did make sense of some online comments warning about the trail. Presently, David spends about one-half day in preparation for each day of a backpack; perhaps he needs to spend more time preparing!
Passage 20: The AZT is maintained but climbs and drops steeply on slippery granitic soil probably made worse from postfire erosion. Short trails near Browns Peak are maintained.
Water and wildflowers were abundant in early April after a wet winter; flower profusion was probably enhanced by recent fires.
Visit statistics (including two days bushwhacking): 5 days, 38 miles at 1.7 mph, and 500 feet per mile average elevation change.
See map below for detailed daily routes, mileages, elevation changes, and photos.

Four Peaks became wilderness in 1984. It includes 60,700 acres along the Mazatzal Mountain ridge north of Superstition Wilderness and south of Mazatzal Wilderness. A 19-mile segment of the Arizona Trail (Passage 20) traverses the east side of this wilderness starting along Vineyard Mountain ridge, passing Camelback Mountain, and then winding in and out of drainages below Buckhorn Mountain.

Although the Tonto National Forest website on Four Peaks mentions 40 miles of trail, the only maintained ones we hiked were the AZT and a loop that included Four Peaks, Brown’s Trail and a newly reopened lower segment of the Amethyst Trail that continues up the mountain to a privately owned working Amethyst Mine.

Maps showed a rough road and two trails that traverse the peaks on the west side of the wilderness connecting to a road and Alder Creek Trail #82. We had planned to use those trails to loop back to the AZT. How good they are, or whether they exist, is unknown to us. (The map below shows our intended but unhiked route in yellow.)

At Bear Saddle, an unmarked trail took off on a slowly descending contour. After a few hundred feet, the brush was impassable and there was no visible path. David dropped down the steep brushy slope into the drainage. I crept down, leaving my pack for my mountain-goat husband to ferry.

The drainage was less steep and brushy. David cut away the worst branches with hand clippers (deemed a necessity for Arizona several years ago). Darkness approached as we neared the confluence of the main canyon; David went back to a seep to pump water for the dinner while I scouted for a campsite. At the confluence, a rushing stream! We made camp in a small clearing on the bank under a large dead ponderosa pine.

The next day we were hopeful as we kept finding stretches of the trail. It never got better. The creek was running a bit too high for rock hopping so we thrashed through brush on slopes above. We weaved back and forth across the drainage, which was sometimes running, sometimes dry.

About 3 pm we got to a pour-off, still more than 2 miles from the canyon mouth. David said if we found no trail around the pour-off we should turn around. We dropped packs and worked our way down to the creek. We found a trail of sorts along the drainage but nothing climbing up the hillside to skirt the pour-off (as the GPS map indicated).

If the trail continued bad or nonexistent after Alder Creek, David worried we might need a day or more to get to water. We turned back. Two hours later, a mile back up the canyon, we found a nice campsite in unburned oak

The next day back to the AZT was terrible—uphill in brush is harder. We started out well, hopping rocks on the creek to avoid brush. But the increasingly steep drainage back to Bear Saddle kept forking; we always seemed to take the worst fork and ended up on the ridge above the saddle.

The long contour on the maintained AZT was a relief. David enjoyed the full moon rising over Lake Roosevelt; I was distracted by the steep rocky drop to the first available flat area for camping—a badly burned but fairly open bench.

The rest of the trip was Plan B: an out-and-back hike on the AZT to burned Pigeon Spring (with algae-covered tank and cow pies), a chilly grey day hike loop near Brown’s Peak, backtracking to make camps in a remnant pine stand and an open sandy flat near Granite Spring (consolation for backtracking is knowing the best campsites!), and repeating the long up-and-down wind back on the AZT above Lake Roosevelt.

Several trail junctions indicated a much more robust “legacy” trail system prior to fire and neglect—a trail to Alder Saddle which originally connected to Alder Canyon Trail below, and two trails dropping towards the lake: Oak Flat Trail, with abundant cairns (stone markers), and Chillicut Trail, which looked totally abandoned except for a hidden sign.

We saw a few AZT thru-hikers and one young couple hiking an AZT section. At Lone Peak Trailhead (for trail to Brown’s Peak) a dozen Universal Terrain Vehicles (UTVs) were parked, their riders talking energetically (no one hiking). On our return back on road, a shorts-clad couple in a UTV asked where to find snow. Maybe bored shelter-at-home refugees were seeking relief in the mountains?

Our last day, upon my insistence, we left the AZT for a more gentle-graded forest road. Amazing wildflowers, non-native grass and fields of invasive star thistle. I stomped those near the road (tactic adopted a few weeks earlier in Superstition Wilderness) but most were out of easy reach.

Near the highway we encountered many informal camps, undoubtedly due to closed campgrounds. One had about a dozen vehicles—apparently undeterred by the governor’s order to limit gatherings to 10 people to slow spread of coronavirus.

Well we definitely didn’t see anyone in Alder Creek. Nor did we see any alder—maybe it all burned.