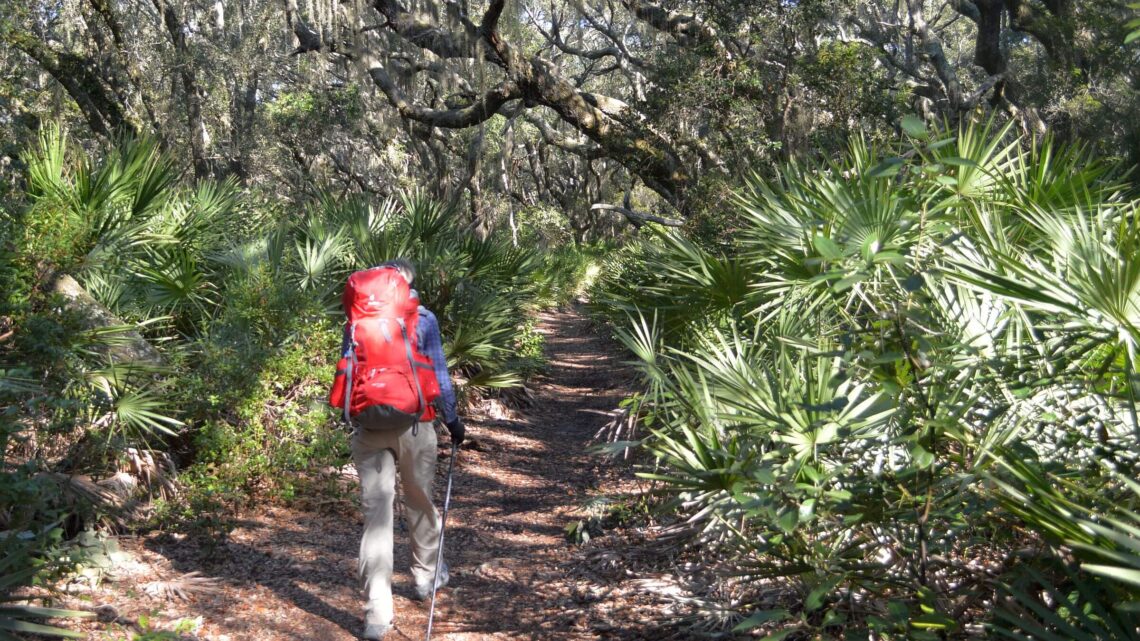 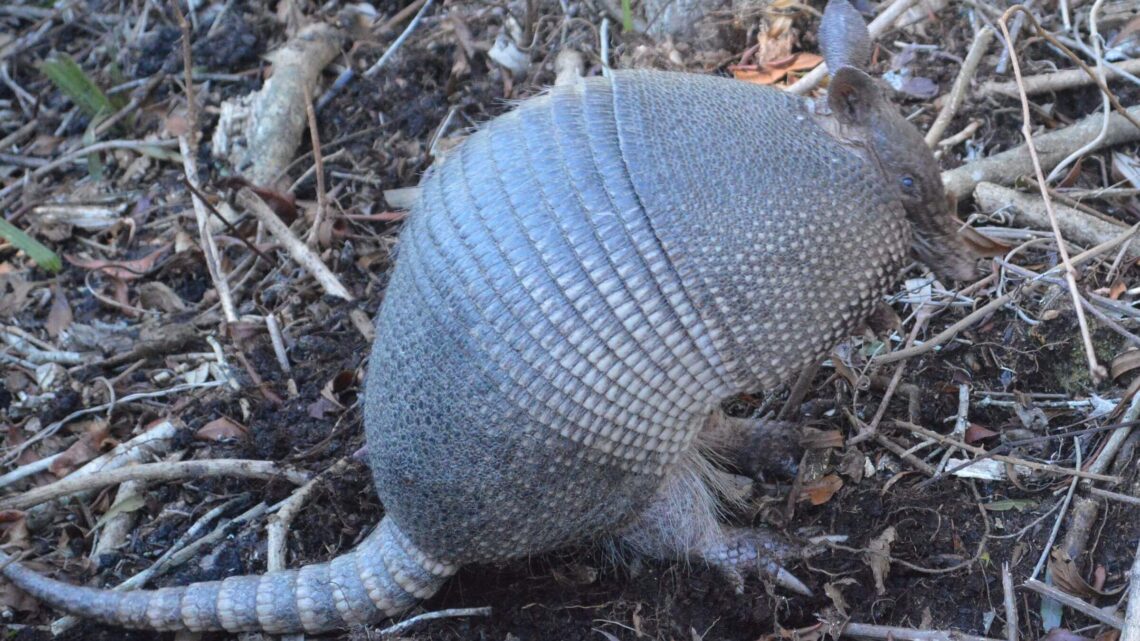 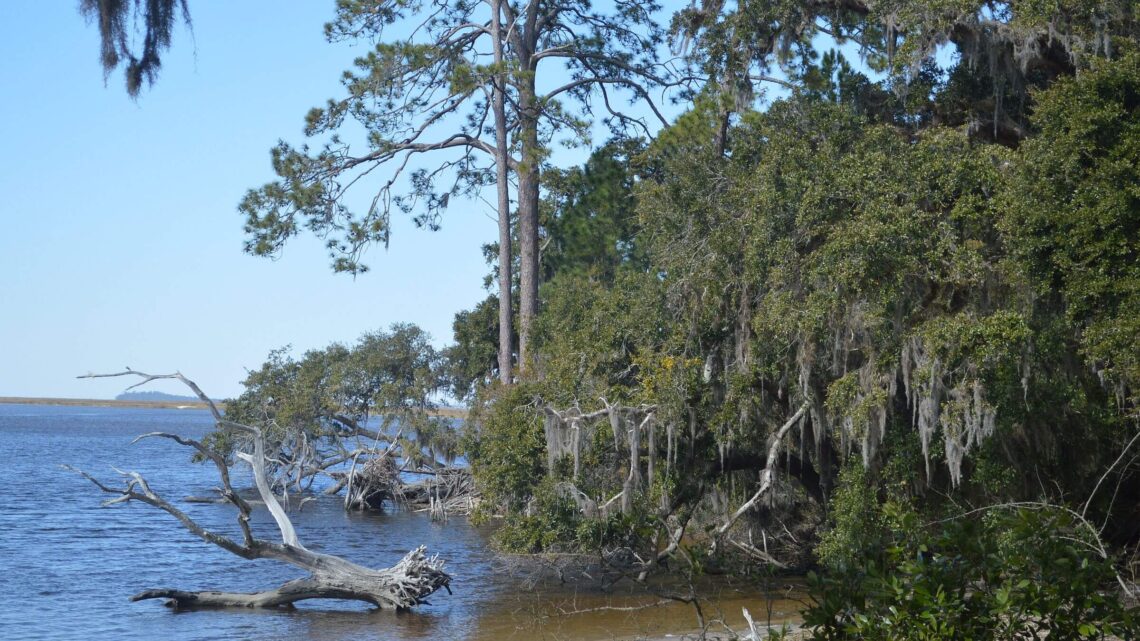 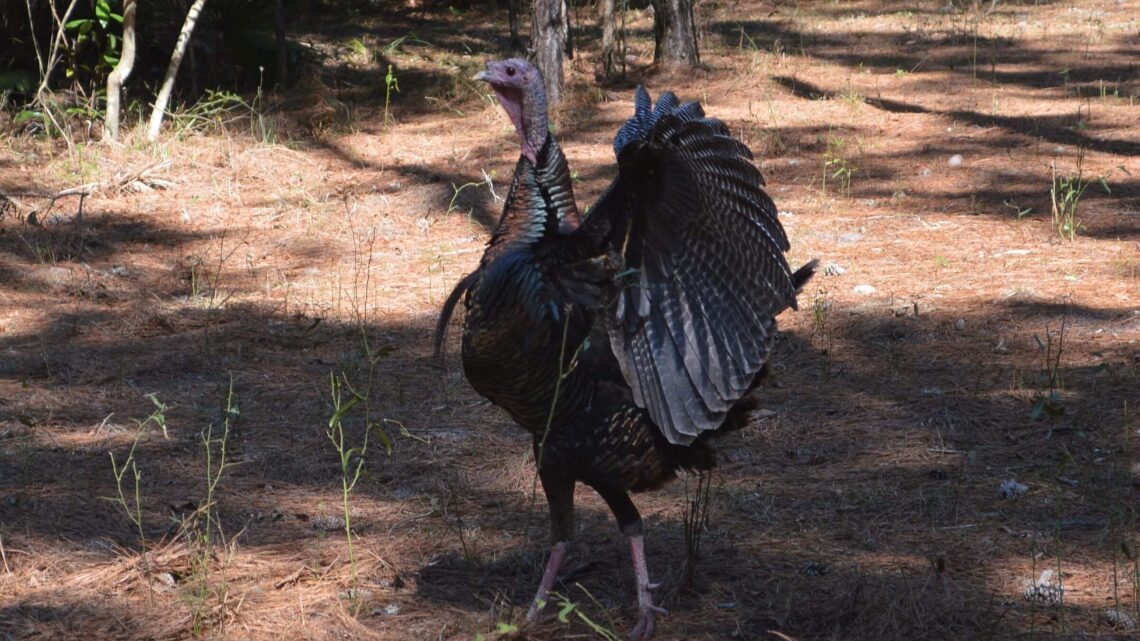 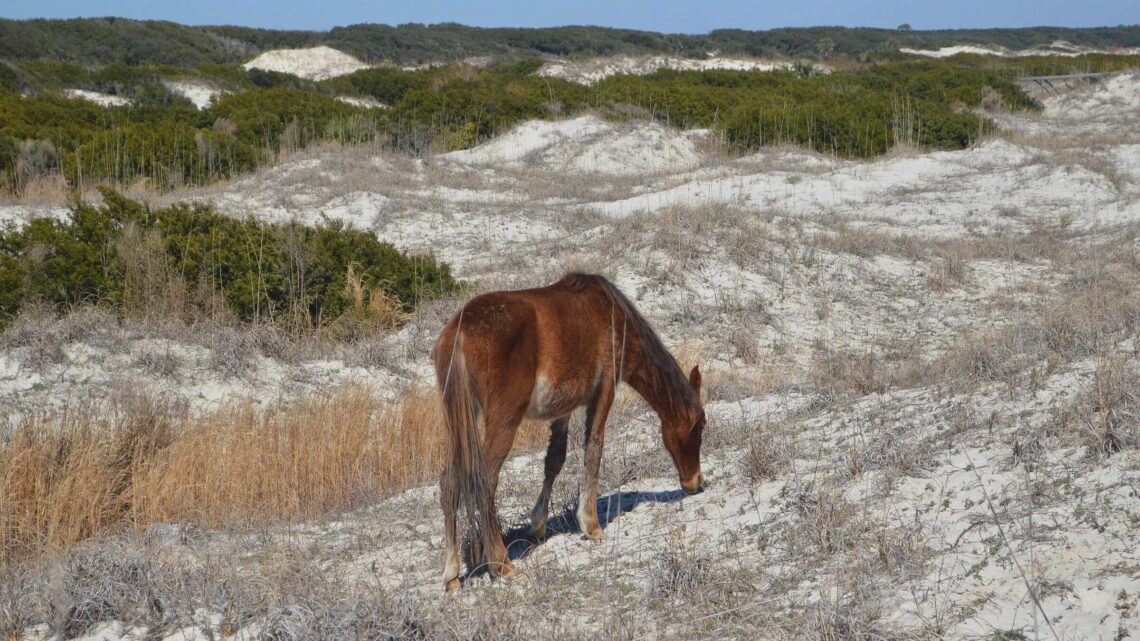 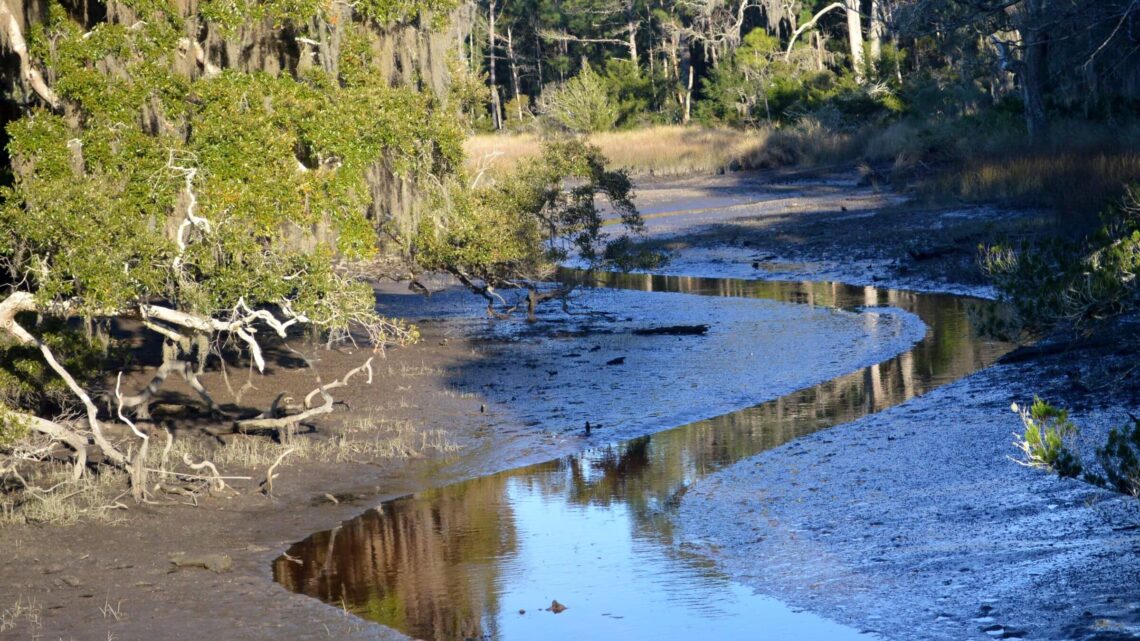 It took two trips to Cumberland Island Wilderness to figure out how to visit it.

Although the nation’s only barrier island wilderness available for backpacking offers miles of roads and trails, dikes for marsh access, sand dunes, and lonely beaches—you have to work around its unique management to eke out a wilderness experience.

Cumberland Wilderness is within Cumberland Island National Seashore, the largest barrier island on the southern tip of Georgia. It’s managed by the National Park Service (NPS) which waxes quite whimsical on its website about this place: “Where nature and history meet…pristine maritime forests, undeveloped beaches and wide marshes whisper the stories of both man and nature. Natives, missionaries, enslaved African Americans and wealthy industrialists all walked here.”

We found NPS most focused on historical interpretation and controlling visitors. Cumberland Island seems primarily managed for day-users coming from the town of St. Marys on a ferry for a short hike to wetlands and historical structures, the often sold-out van tour of historical sites, or bicycle rental to ride the roads. (Currently the pandemic has stopped van and mansion tours.)

Wilderness campers must negotiate the online reservation system or take a chance on campsite availability on a walk-in basis. You must also make ferry reservations and allow time for at least two “ranger” briefings on general NPS rules: one before the ferry ride and one upon reaching the island.

NPS patrols 31 miles of road and more beach with a large fleet of vehicles. It was quite a surprise to hike 12 miles to Brickhill Bluff, the campsite furthest from the dock, and meet a ranger who had driven out (on wilderness-exempted road) to check compliance.

We visited this unique island twice in 2015. The first visit in February was intriguing and frustrating. But it was a good “check out” for our second visit in November—when we knew the drill and were able to loop the island, visit every feature of interest, and camp in the best campsites (which are outside the wilderness).

Cumberland Island Wilderness, on the southern tip of Georgia, is 9,900 acres within Cumberland Island National Seashore—the only barrier island wilderness in the United States open to backpacking and camping with warm fall and tolerable winter temperatures.
Features include beach, marsh, bay, and maritime forest. We saw turkeys, an armadillo, wild horses, and many aquatic birds.
National Park Service (NPS) manages island and wilderness; the only access is via commercial ferry or private boat. See LINKS below for the Cumberland Island web site, which provides much information for planning a visit.
Camping limited to 5 sites—3 in wilderness and 2 walk-ins outside. Use Cumberland Island Map (LINKS below) to plan hikes, and reserve campsites with Cumberland Island Camping Permits by using 2nd and 3rd LINKS below. (Permit link opens to rec.gov site for Cumberland. To use, click blue box on right, “build itinerary.” When the next page opens, enter number of persons in Group Size box on upper left hand corner; this will open the calendar for selecting dates and campsites.)
Hikers may use 50 miles of trails and roads; 31 miles of road are open to bicycles, NPS vehicles, private landowners, and tour vans (now closed due to COVID-19). Unfortunately, we found many wilderness trails are poorly maintained. There are also about 17 miles of Atlantic Ocean beach to hike, connected with the island trail system by 10 spur trails.
Non-wilderness features include historical mansions and ruins, docks, an area settled by freed slaves, a private inn, and other inholdings. Earlier Timucuan native inhabitants left only piles of shells (middens); these indigenous people were completely wiped out between 1500 and 1800.
Visit statistics: 7 days (both trips combined), 84 miles and 25 feet per mile average elevation change.
Go to map below for more information on trailheads, daily routes, mileages, elevation changes, and photos. (Click on white box in upper right corner to expand map and show legend with NAVIGATION INSTRUCTIONS.)

We hadn’t planned to visit Cumberland twice in one year—a long two days’ drive from northern Virginia where we lived at the time. But our South Carolina trip was scuttled en route by Hurricane Katie, so we headed further south to Cumberland to see what we missed on the first visit.

We lined up the best campsites for our venture—two were non-wilderness. Sea Camp near the ferry dock and Stafford Beach were both developed beach camps and in nicer forest (with palmetto removed) than were the three scruffy wilderness sites.

We took the earliest morning ferry, dropped our packs at Sea Camp and headed south on seashore for a non-wilderness visit to wild beach, waterfowl, marshes, and historical ruins. The 10-mile hike got us back to camp at dusk. The next day we headed north on the beach, turned inland through the wilderness, and then out to the bay to visit Plum Orchard, a mansion built by Thomas Carnegie for his son George and family. In a brief tour with an NPS volunteer, we were amazed at the opulence and (for their time) cutting-edge plumbing and inventions enjoyed by these ultra-wealthy island owners.

On our next side trip, Table Point Trail disappeared on the edge of a vast marsh, so we backtracked. We camped alongside Brickhill River on the periphery of Brickhill Bluff Campsite (to avoid any late crowds from NPS overbooking, as happened last time), then looped north on roads ending at Christmas River. Here we saw boaters, a private inholding, and much development on the northern end of the island.

Heading south through inland dunes on the Roller Coaster Trail we encountered wild horses, and decent trails on dikes. We ended this 17-mile day by hiking beach until dark, entertained by scuttling “ghost crabs” and mystified by palm tree sentries—natural or planted? Some palms were also pedestaled with huge root masses above the beach—perhaps evidence of rising sea level. We camped under a huge live oak (“evergreen” oak that drops annual leaves in spring just as new leaves are growing out) cleared of palmetto at Stafford Beach, then hiked trail back to catch the Sea Camp ferry.

We enjoyed sunshine and warm (shorts hiking) weather and shared campgrounds and the ferry with other visitors, but were on our own hiking both outside and inside wilderness.

The first Cumberland trip came at my request to celebrate my 60th birthday “somewhere warm”—so we headed south for wilderness. Back in 2015, you made reservations by phone (this has changed; see sidebar). Sight unseen, we reserved a two-way ferry ride and campsites for our longest hike (Brickhill Bluff) and halfway back (Yankee Paradise).

We rode the ferry with 30 rowdy Boy Scouts and were disturbed to see backpacks; none of them came to the backcountry briefing so we hoped they were camping elsewhere. Just one couple and we sat in a little room at the dock ranger station for our lecture on rules and paperwork. We were told we had Brickhill Bluff to ourselves; the couple was camping at Yankee Paradise for two nights; we would join them the second.

Then we donned backpacks and set off. We were immediately amazed hiking through palmetto, giant live oak draped with Spanish moss, and armadillos crackling along. One jumped straight in the air when David moved in close to take his picture. (This is apparently a standard defense which works ok for predators but not for cars; hence the many dead armadillos along roadways.) We headed north, zig-zagging between beach and sand dunes using spur routes, and edging around swampy areas on muddy trails or on dikes. Wild turkeys crossed a beach path.

We arrived early evening at Brickhill Bluff Campsite. As we started to set up our tent, more than a dozen Boy Scouts piled in to join us. The scoutmaster said the troop had split up; half camped at Sea Camp (a developed site on the ocean) and half came here. Gee thanks, NPS! About that time the park ranger arrived in his vehicle apparently to check out the scouts. I asked him why we were double booked. He said the scouts got their briefing (and campsite?) after we left.

After the ranger drove off, we took our packs south of the campsite to oak forest out of earshot of the raucous crowd. The next morning we left camp and hiked so-so Terrapin Point Trail to an old pier, then past some wild horses to The Settlement, fit a historical area that had been settled by former slaves. A tour van came rumbling up and we left, returning on a wilderness trail that alternated from old road to flooded marsh.

The scouts had left Brickhill Bluff but in hiking through woods to the water pump, we found a pile of scout poop and toilet paper, which we covered. Ick. We took Roller Coaster and Lost Trails south, skirting sand dunes and ponds, crossing marshes on dikes, then heading west to our second camp at Yankee Paradise. The other couple had the best tent site but we made do. After a hike to Plum Orchard Mansion for water, we talked to the couple at camp; they were ecstatic about touring the mansion and looping some of the trails.

The next morning we returned by a beautiful pine plantation near a water station and noticed a tent; someone had chosen this lovely pine-straw site instead of the designated Hickory Flat Campsite a mile south—which was open, windy, and occupied by a large group. On our last zig-zag south we came through Sea Camp and decided it was the best campsite on the island.

We finished our adventures with a windy jaunt to check out Dungeness Ruins, remnant of another Carnegie mansion, joining other bundled visitors wandering around. Finally, back to Dungeness Wharf (by Ice House Museum) to meet the ferry.

On our way to the Dungeness outing, we stopped at the ranger station for official check out. The truck patrol ranger gloated to me about catching the illegal campers in the pine plantation (which really should be another designated campsite). I mentioned the uncovered scout scat at Brickhill Bluff—he didn’t seem too interested. I guess NPS has its own priorities.