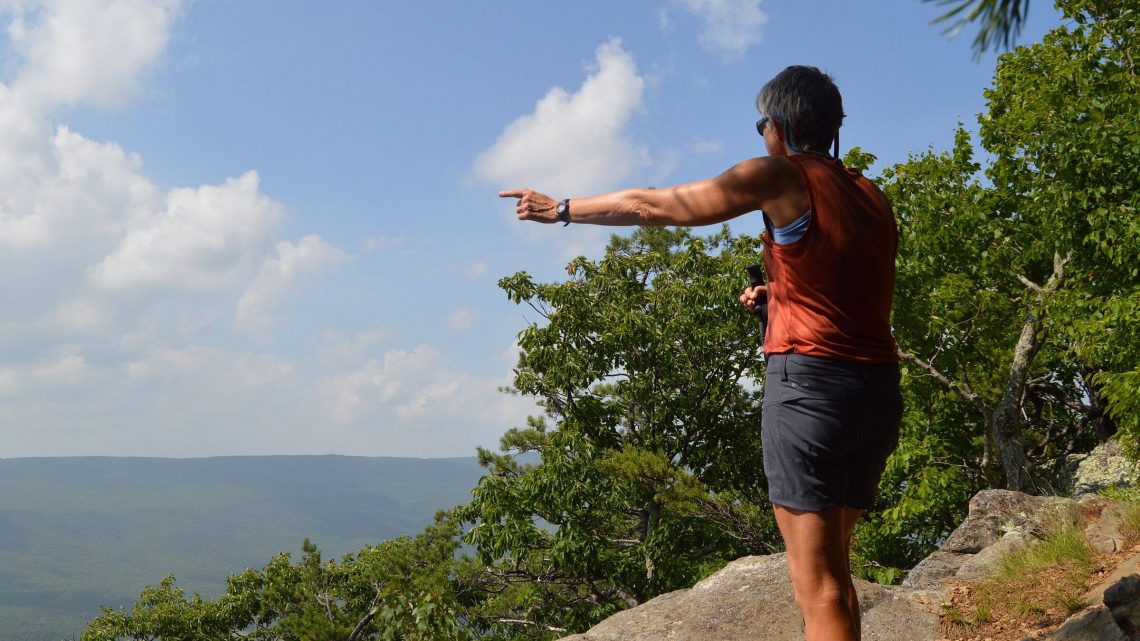 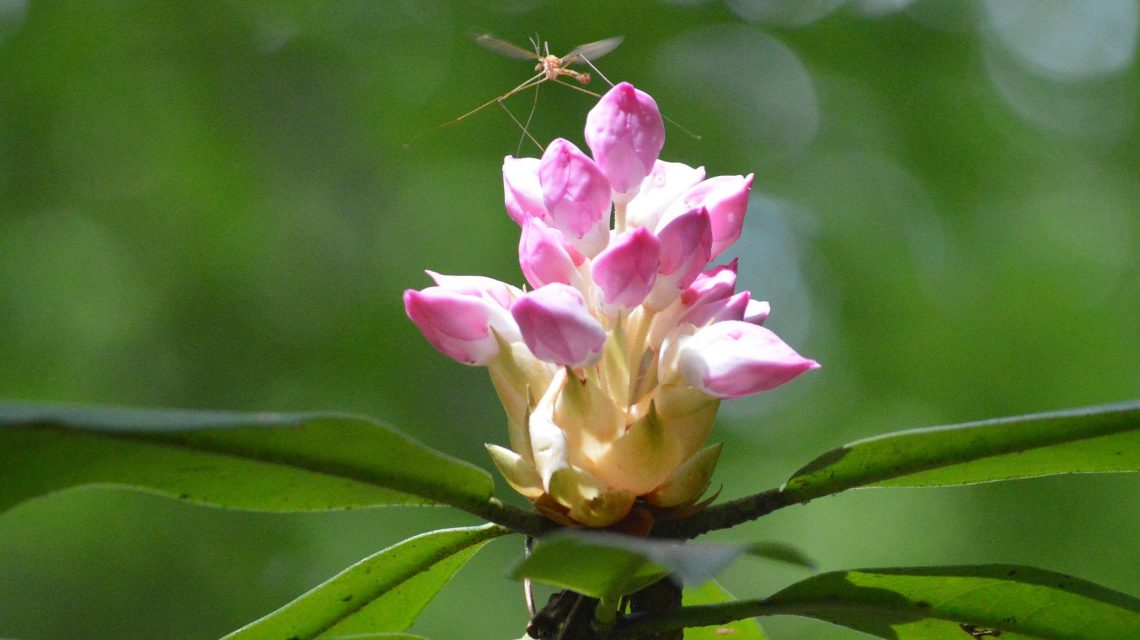 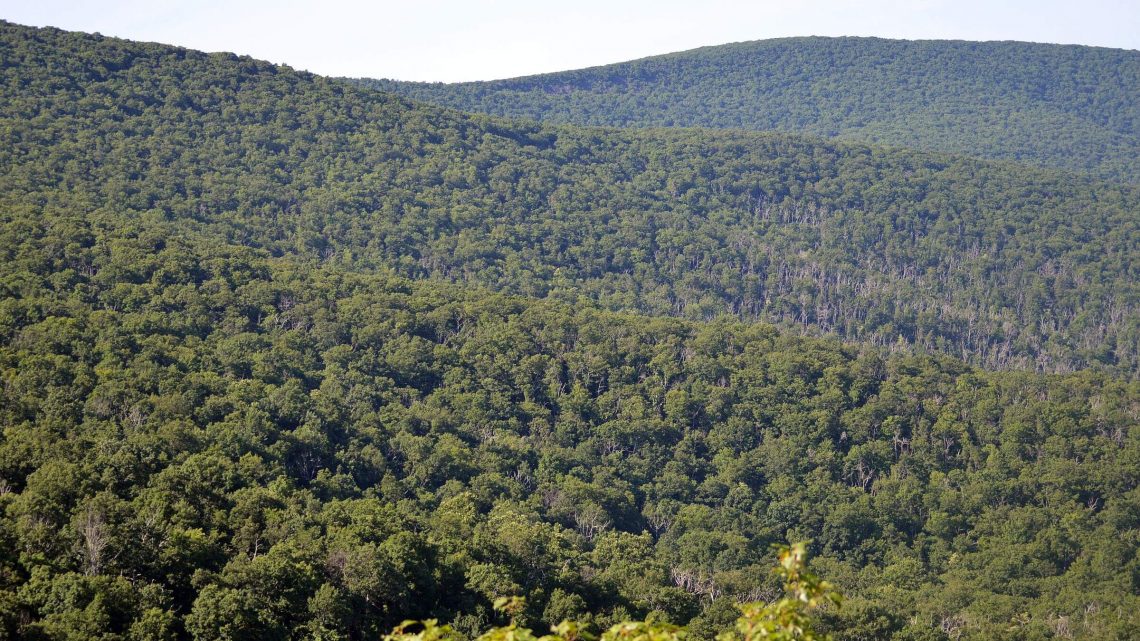 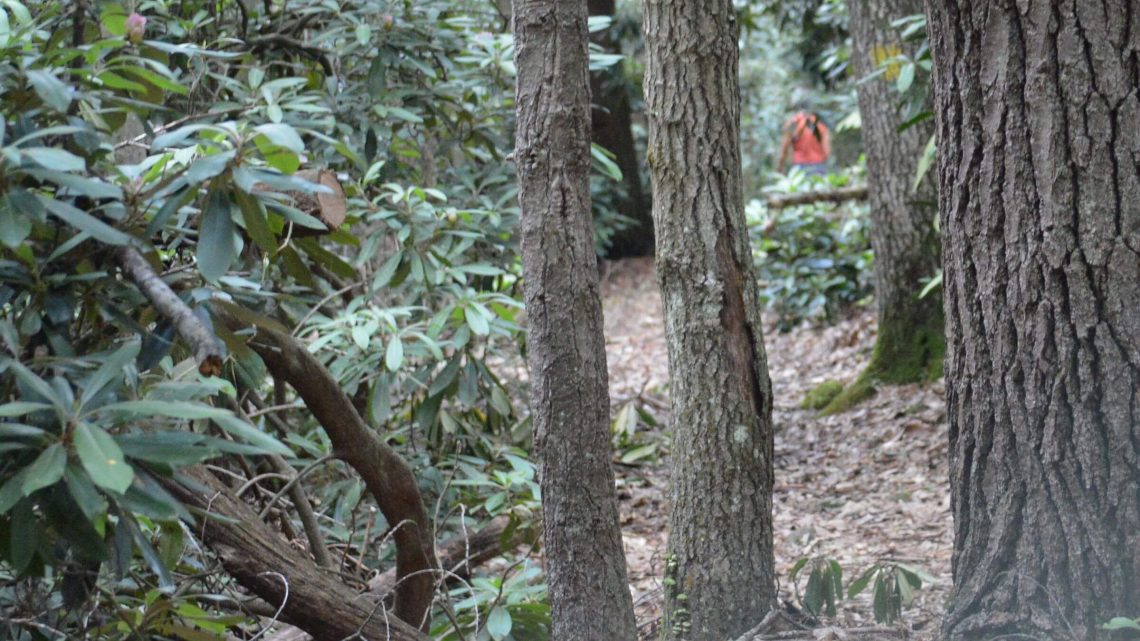 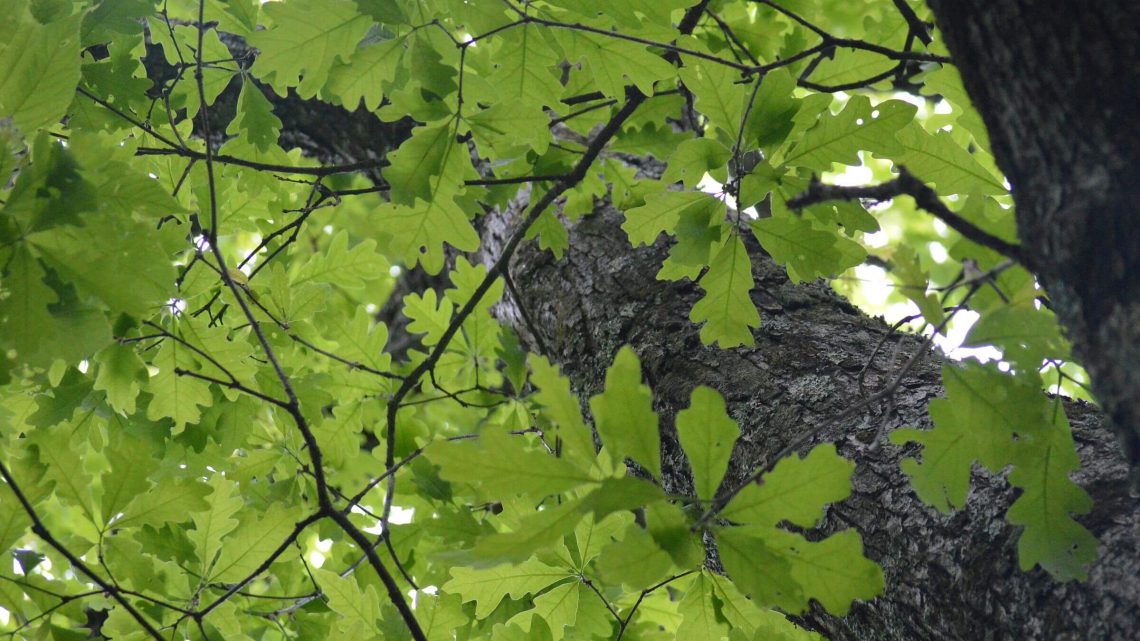 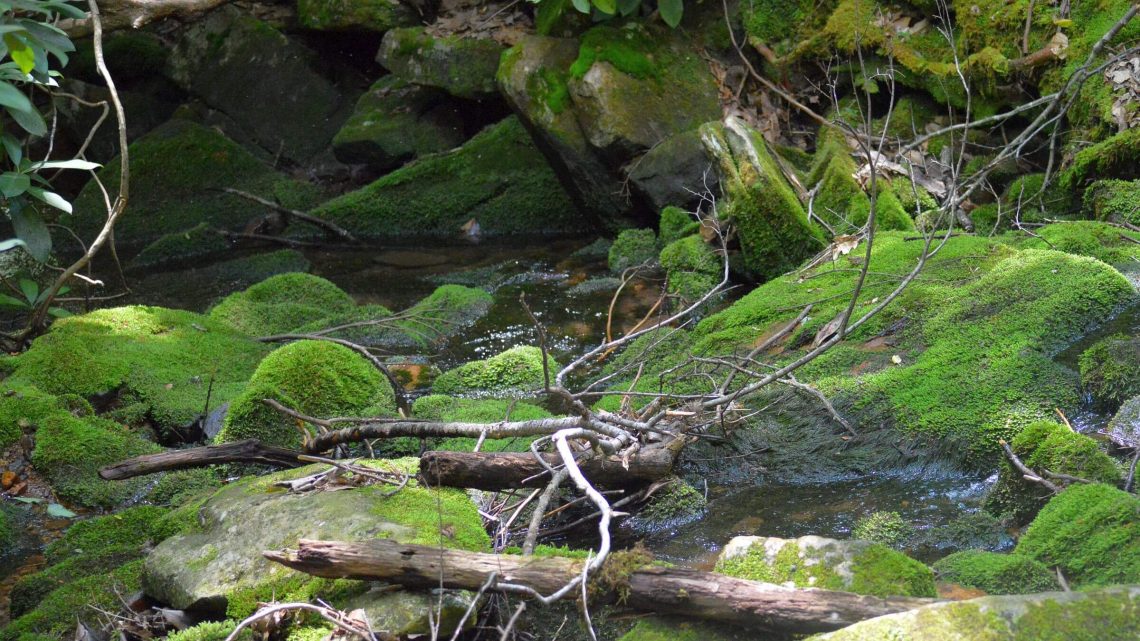 So Close and Yet So far

The long ridge of Potts Mountain runs for miles along or near the Virginia-West Virginia border north of Interstate-84 between Pulaski and Roanoke. Six wilderness areas on or close to Potts could offer interesting backpacking opportunity in remote country—with a few connector trails. The areas are on the same or parallel ridges in pairs only 1 to 5 miles apart.

Instead we accessed them with “out and back” hikes and hours of driving—thanks to minimal or no trails in the wilderness. The primary access is the Appalachian Trail (AT), which crosses four of the wilderness areas—and even connects Peters Mountain and Mountain Lake.

Outside the AT, these are lightly visited wilderness areas; we only encountered visitors off the AT on spur trails close to roads and near developments.

Connector trails between these wilderness areas could open up several days of backpacking opportunities. Wilderness should be more than something to view from the road or pass by on the AT.

Virginia Wilderness Project covered visits to 24 Virginia wilderness areas.
Posts on wilderness visits are organized by physiographic region.
This post covers 6 wilderness areas in central Ridge & Valley Region visited in pairs: (1) Barbours Creek & Shawvers Run in June 2014, and in July 2014 (2) East Brush Mountain & Brush Mountain and (3) Peters Mountain & Mountain Lake.
All have minimal trails except where Appalachian Trail (AT) passes through; but pairs are in close proximity and could offer backpacking loops if connected by trails.
Visits totaled 6 days to hike 76 miles, and average elevation change was 450 feet per mile.
See map below for detailed routes, mileages, elevation changes, and photos.

Barbours and Shawvers are a mile apart along Potts Mountain, but we drove 40 miles between trailheads to access both.

In June 2014 we camped at The Pines: an empty, well-maintained campground on the boundary of Barbours Creek Wilderness. (Namesake pines, probably planted, were mostly lost to bark beetle mortality.) We hiked the only trail, 2.5 miles along Lipes Creek falls and pools followed by steep switchbacks to its terminus at 3590 feet on Potts Jeep Trail at the wilderness boundary.

We then doubled back on forest roads to access Shawvers Run via the improved Potts Mountain Road. The only trail of a half mile—marked by a beautiful kiosk—is to Hanging Rock views of trailless wilderness to the northwest and private land in the valley below.

We could have hiked these two areas—only a mile apart on adjacent boundaries—as an overnight backpacking trip. Since there are no connecting trails, such a hike would require sharing Potts Mountain Jeep Road with vehicles and bushwhacking through the trailless Shawvers Run drainage. But a few more trails would greatly improve visiting these wilderness areas.

In July 2014 we hiked these two wilderness areas, separated by a power line corridor, along the western slope of long Brush Mountain ridge. The AT is the only trail in East Brush Wilderness; we saw many hikers there but no one in virtually trailless Brush Mountain Wilderness.

At the junction with the access road to the ridge, we disappointed a group of bright-clad AT thru-hikers trying to hitch into nearby Blacksburg; we were heading into wilderness, not out. Near East Brush Mountain Trailhead, which meets the AT, benches and a monument/viewpoint—maintained by veterans—honor a local WWII hero who died in a plane crash in the area. From our camp on the ridge near Brush Mountain, we hiked the AT “out and back” northeast to Trout Creek Trailhead that evening and northwest down to Craig Creek the next morning. Both ridge hikes were scenic; the ridge down to Craig Creek passed through oak-pine and along drainages lined by rhododendron “trees” and crossed the creek with several wood bridges. We heard hikers passing camp late into the evening and met a few on each hike—including a guy sprawled on a bench, drying his clothes after rainy days. As usual, there was little solitude on the popular AT.

To visit Brush Mountain, we drove a muddy road along the wilderness boundary, stopping and walking into the wilderness in a few places but with little desire to bushwhack very far. Then we drove 37 miles through Blacksburg, north on US-460 and east on paved Craig Creek Road to seek the only route into this wilderness shown on the map. Passing along private land for 9 miles from the state road turnoff, we spied a parking lot, gate, and sign—Foot Travel Welcome—indicating public land and an old logging road up Hazelnut Hollow. On the far side of the creek was a new Brush Mountain Wilderness sign. The road split a half mile up; both forks ended in “landings” (cleared areas where logs are piled for hauling out). Ridges above landings might be nice off-trail ascents in leaf-off season. There is a potential “wilderness” campsite in open trees on Craig Creek near the trailhead.

Wilderness visits could be greatly enhanced by building a mid-slope trail, perhaps connecting the road on top to spurs for viewpoints or campsites. A trail would not seriously detract from bushwhacking opportunities for off-trail purists; the terrain map shows about 70 ridges dropping from the boundary road along Brush Mountain ridge.

Our last wilderness pair visited in July 2014—Peters Mountain and Mountain Lake—again involved many people on the AT and few elsewhere, and a circuitous drive between wildernesses.

We found an obscure trailhead for Peters Mountain with an old kiosk nestled into brush off Big Stony Creek Road. After a weed-clogged connector, the well-used AT soon passed Swamp Pine Shelter, bustling with thru-hikers. No campsite was available on the steep trail up the creek through thick rhododendrons, oak and hickory; nor on long switchbacks; so we camped on an open oak flat just below the mountain. In the morning we passed through a flat with a few eastern hemlock. On the ridge we saw a sign indicating “Allegheny Trail” heading northwest; the trail appeared to be mostly obliterated by logs. We took the AT southwest a mile and then returned to the trailhead, passing an overflow campsite we had missed just above the shelter (still full of people).

Next we explored the only other trail in Peters—Dismal Branch—via a maze of roads, an unmarked gate, a grassy road and a single cairn marker. Downed logs, brushy rhododendron and washouts meant it took 2 hours to hike 3 miles to an open basin of hardwoods and a small fire circle. The trail climbed to the divide between Dismal and Dixon branches and the first wilderness boundary sign. (The map showed Allegheny Trail ¼ mile above.) We looped down Dixon and North Fork Stony creeks out of the wilderness. The descending trail was better, and we soon saw cut brush, sawed logs and yellow paint marks—a trail crew ahead of us! We later learned the Forest Service was building a new loop outside the wilderness and would not reopen Dismal—too costly to clear with a crosscut saw as required by agency regulations in wilderness. Interestingly, blowdowns on the multi-use Allegheny Trail were left deliberately to discourage ATVs from using the AT.

A slow winding 19-mile drive from Dismal Branch brought us to Mountain Lake Wilderness—which encompasses 4000-foot ridges along the Eastern Continental Divide and three creek drainages dropping to 1900 feet along Johns Creek. Mountain Lake is named for the only natural body of water in western Virginia, which ironically lies just outside wilderness and is fronted by a private resort, housing developments and a university field camp. Confused by branch roads to these developments and an unmarked main road, we wandered for some time before we found the trailhead into the wilderness, and hiked in a mile to camp in a flat area.
The next day we met the AT, which allowed visits to both ends of the wilderness. We descended on piney switchbacks to War Spur Shelter (named for War Spur Branch which drops from the ridge to Johns Creek). After a sign indicating that we were leaving wilderness, the AT crossed a road. A truck was parked on the road and someone was walking, the only person we saw on July 4th. We had to search to find the trail into the south end of the wilderness: an unsigned route 0.1 mile above the road. We followed yellow paint marks on a faint path up and down small drainages above private land before our descent to public land on the creek. After some trail finding, we followed a brushy old logging road. Wearing sandals for a day hike, I disturbed ground bees in a boggy area, then stood immobile and screaming while bees stung my feet. David kept yelling, “run!” until I finally did.

After false starts and crossing drainages, the old road climbed along rhododendron-shaded Johns Creek and up through oak-maple to the wilderness boundary—a sunny field of weeds in a power-line right of way. We doubled back and camped below War Spur Shelter on a creek. Silence was punctuated by the distant crack of fireworks.

The next day we took the steep AT over Pine Mountain and up a cairn-marked connector to Potts Mountain Trail, a grassy road through grassy meadow east to White Rocks viewpoint. Our map showed trailless wilderness to the northwest, but views and the GPS map indicated old roads almost to Allegheny Trail. We completed our loop carrying packs to the head of War Spur Branch in old-growth red spruce and hemlock. We crossed the creek just above where it drops 2000 feet to Johns Creek, climbed to popular War Spur Overlook and returned through boggy Salt Pond Mountain. A couple passed us, and a family sprawled along rock outcrops on the overlook.

A little work to link old road routes to Potts, Allegheny and Appalachian Trails with new trails would create premier backpacking loop(s) through Peters and Mountain Lake Wildernesses—only 7 miles apart on the AT.