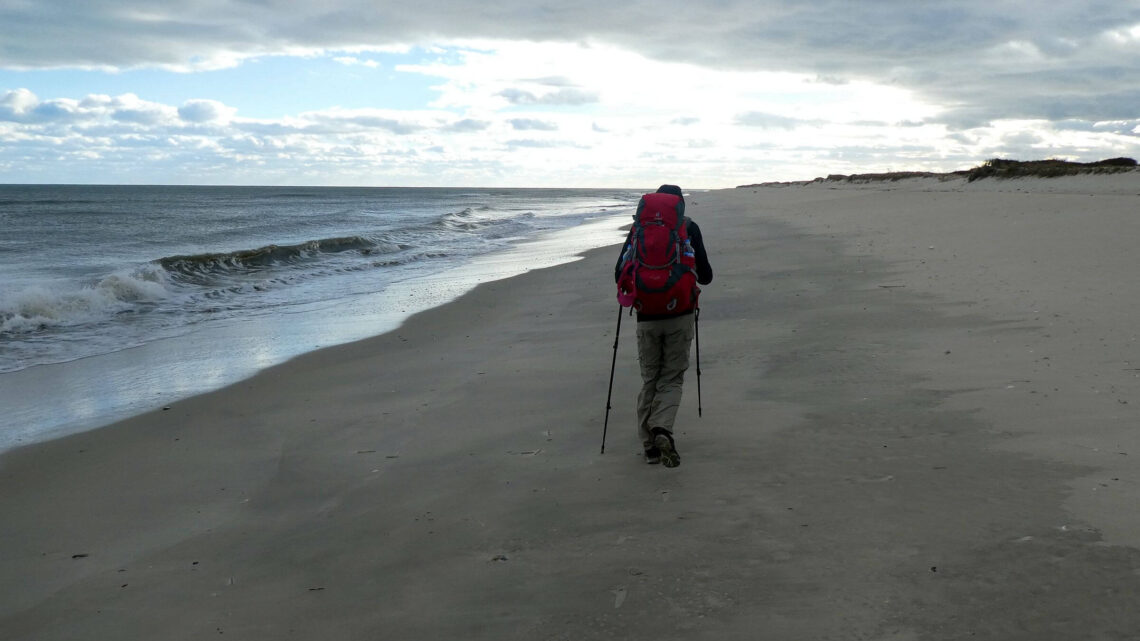 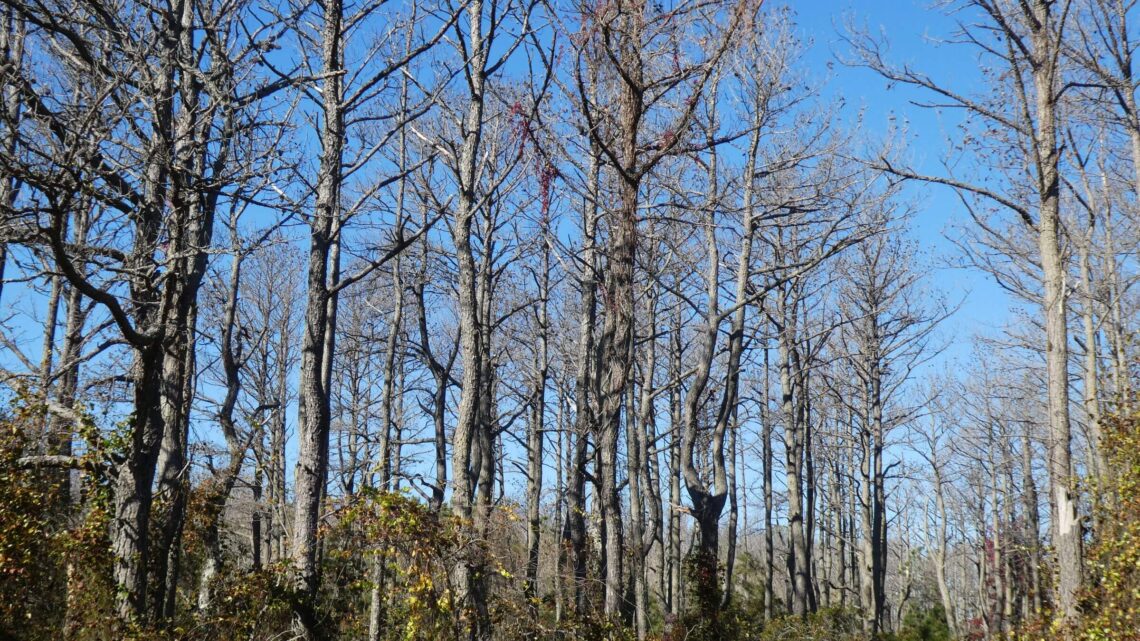 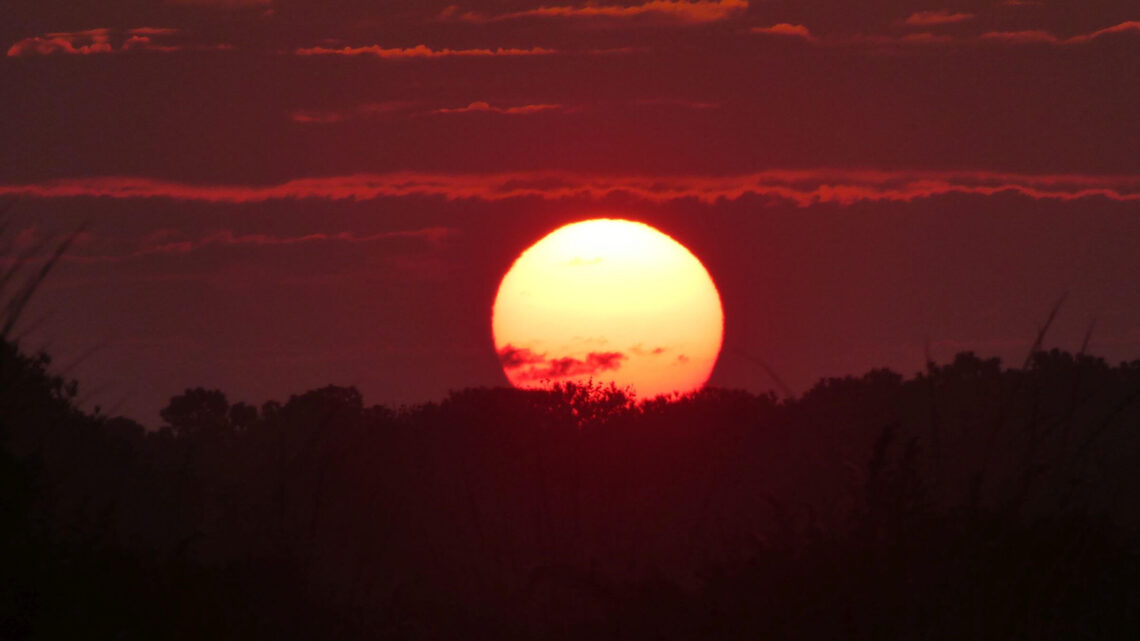 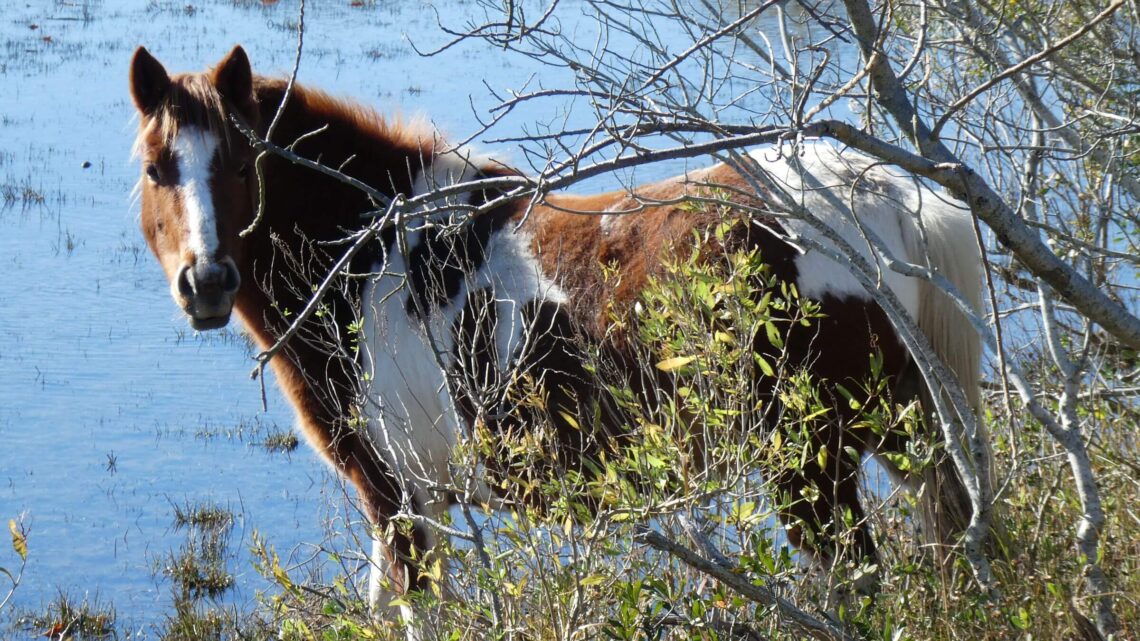 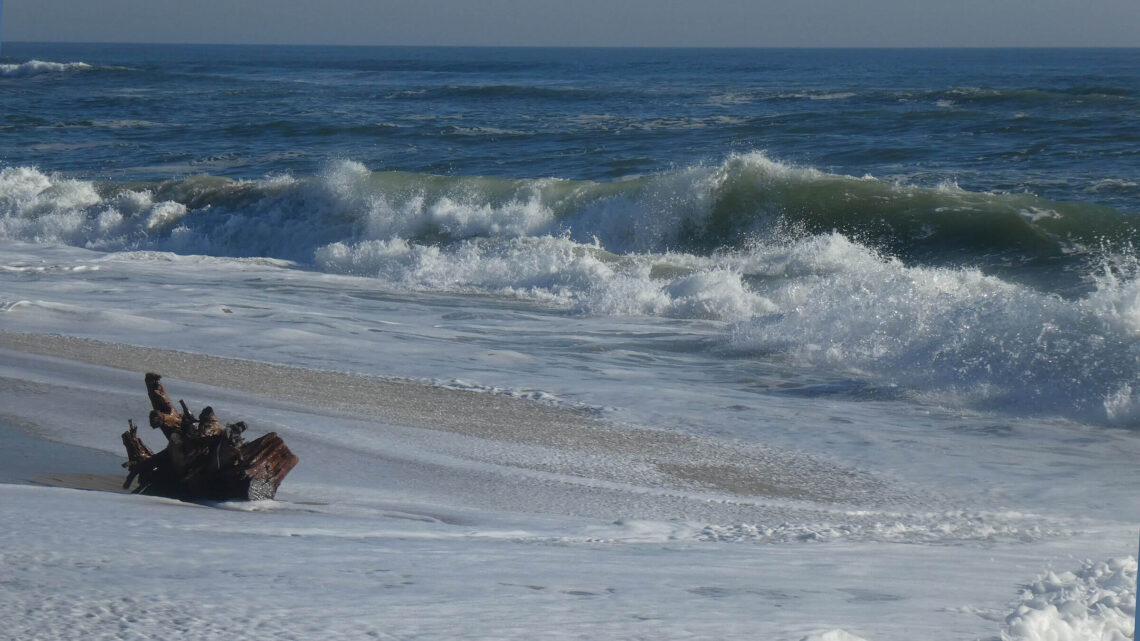 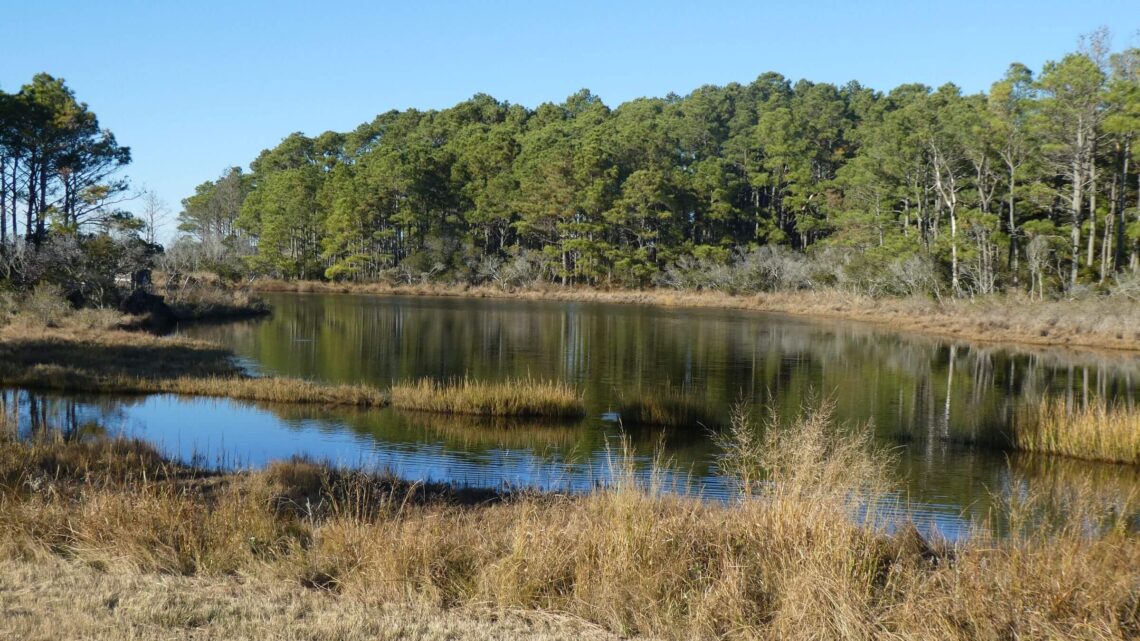 “Going to the beach” is an iconic ritual for many Eastern U.S. residents. Thousands make the spring or summer pilgrimage east seeking undulating coastal expanse, shorebirds, shells, salt air, and wild skies along humanity’s favorite wilderness: the ever-restless, ever-changing ocean. For most people, this entails hours driving bumper-to-bumper; a collage of business enterprises lining crowded coastal highways; congestion of beach houses and motels on the ocean edge; and finally, strips of beach crowded with sun-tanners, kids, dogs, dune buggies, beach bikes, and a few walkers and joggers. The flow of beach visitors slows considerably in late fall and winter, but beach visit may be cold and windy, and still impacted by real estate developments.

Despite more than 2,000 miles of Atlantic coastline in Eastern U.S., only a few strips of state and federal lands are open to the public; most is privately owned.

During 17 years in the Washington DC area, we found solitude, beach hiking, and quiet camping on two barrier island wilderness areas administered by the National Park Service. Both were managed as if wilderness experience was an afterthought. But we found ways to work around this.

In another post we discussed our adventures in Cumberland Island Wilderness in Georgia. Although the Park Service seemed to favor day users, historic mansion tours and patrols on excluded roads within wilderness, and visitor control over backcountry ambience; we found wintertime wilderness solitude for our trips.

The second barrier island, Assateague—our coastal backpacking favorite—was only about 4 hours’ drive from our home in the D.C. area. Assateague was originally the southern tip of Fenwick Island, a barrier island in Maryland and Delaware. A 1933 storm tore Assateague off Fenwick just south of Ocean City, creating an inlet between the two islands.

The island was designated a National Seashore under National Park Service management in 1965. A small section near the Maryland entrance road is Assateague State Park and campground. The Chincoteague National Wildlife Refuge, created in 1943 to protect shorebirds, occupies the island’s south end in Virginia and is administered by U.S. Fish and Wildlife Service. No camping is allowed on the Refuge, but the Seashore offers six backcountry campsites, all in recommended wilderness in Maryland.

After 7 visits over several years, we designed a good island backpack trip to minimize impacts of agencies’ “hook and bullet” and vehicle priorities, no water, closures, high tides, and biting insects.

Proposed Assateague Wilderness is about 6,500 acres of a barrier island off the Maryland and Virginia mainland. It was recommended wilderness in 1975 but never enacted by Congress. It encompasses much of Assateague Island National Seashore managed by the National Park Service and Chincoteague National Wildlife Refuge managed by the U.S. Fish and Wildlife Service.
Feral horses (“ponies”) are a feature. A state line fence separates Seashore and Refuge herds. Marguerite Henry’s book Misty of Chincoteague gave fame to a yearly Refuge herd roundup.
Our 2016 visit, based on experience from 7 previous trips, helped us devise a 4-day backpack into the proposed wilderness and some surrounding lands closed to motor vehicles. Hiking was fairly easy but planning complex; we hope our documentation will simplify planning for others.
Backcountry camping is only on the National Seashore, in four bayside and two ocean campsites reached by out-and-back beach hike. For longer visits (like our map below), one can also hike to the campsites from the Chincoteague Refuge; the Park Service staffs an office at the Refuge that issues permits. Bayside campsites can also be visited by kayak or canoe.
High tides impact beach hiking. To avoid cold wet winter hikes, check tide chart to plan best hiking at low tide or just after receding high tide. Worst time is during increasing high tide up to 5 feet at mid-day (forcing a hike in soft sand on slanted berm much of day). Look for early morning high tide or moderate high tide less than 4 feet.
No fresh water at campsites, so must be packed in. Some fresh-water ponds are used by ponies who drink about twice as much as normal horses because of salty diet; but these are not mapped (for public use) to our knowledge.
Check Park Service website for backcountry rules and availability. Get required backcountry permits and choose campsites at North Beach Ranger Station in Maryland or Tom’s Cove Visitor Center in Virginia.
Visit statistics (for 2016 trip): 4 days, 58 miles, at 2.8 mph, and 100 feet per mile average elevation change.
Go to map below for more information on trailheads, GPS routes, mileages, and photos. (Click on white box in upper right corner to expand map and show legend with NAVIGATION INSTRUCTIONS). Map shows 2016 trip with photos; some earlier trip photos are also included.

Our first backpacking trip to Assateague Island was December 1999. Hiking was nice on wet sand near surf, but wind was bone-chilling, and midday high tides forced us up to hike slanty berm near surf-fishing vehicles roaring on a primitive route along the edge of low sand dunes.

The 12-mile Maryland beach of Assateague Island is an Over-Sand Vehicle Zone allowing up to 145 vehicles daily (maybe why this area will never be designated wilderness). We saw surf fisherman with big poles in rod holders and lines trailing into the ocean, huge ice chests, and lawn chairs often set up around fires to wait for a series of deep jerks to their rod tips. The Park Service collects permit fees up to $200 annually per vehicle and frequently patrols the beach.

But most of Chincoteague Refuge beach in Virginia is closed to motor vehicles. (Vehicles are permitted on Tom’s Cove and a few for anglers on small part of beach when the Cove OSV zone is closed in spring and summer). So one can hike “wild beach” to the state line and loop back on Refuge routes and roads. Since camping is not allowed in Refuge, backpacking it is a challenge. But as our map shows below, we discovered how to navigate the Refuge to and from National Seashore backcountry campsites.

We visited in colder seasons and saw virtually no other people backpacking—except one group on our 2016 hike on a warm November weekend. We encountered duck hunters twice. Once we camped at State Line because the nearest bayside site, Pope Bay, was closed for hunting. Still, we hiked inland to check it out; when the air resounded with gunfire from duck hunters on the bay, we retreated to our windy camp. We also met boats bristling with hunters on inland Refuge waterways. Forested areas on the Refuge contain deer blinds, but we never encountered deer hunters—at least we never saw any, perhaps hunters saw us.

Other than seabirds on the beach and numerous waterfowl on the inland lakes and the bays, the most famous animals on Assateague are technically not “wildlife” but feral “ponies,” descendants of domestic horses. The first time we camped at Pine Tree campsite midway in the wilderness, ponies galloped through our camp several times in the night. Once when we drove to the Seashore trailhead, ponies were hanging out on the road harassing cars. They are not shy.

Our 7th visit to Assateague in March 2015 started at the Refuge where we hiked “wild beach” to the Seashore (with peak-high tides in early morning and early night, best for hiking wet sand near surf most of day), then dropped packs at Pope Bay and day hiked to Green Run and back. On the way back, we hiked Refuge roads along dikes and inland ponds, and met many nonchalant wild ponies. That trip convinced us the Refuge was best for a “loop” trip. But we wanted to stay longer on Assateague without packing extra water.

Last and Best Visit: Long Days and a Water Drop

Coming from the Washington D.C. area, we got to the Seashore in late afternoon and hiked two miles to Tingles Island camp to leave one-gallon plastic jugs of water in trees (we thought this might discourage ponies from taking a sip or nip). We hiked out, drove south to Virginia, and spent the night in a motel on Chincoteague Island (across bay from the Refuge). We arrived at Tom’s Cove when office opened at 9 a.m. to get our first-come first-served backcountry permit (Park Service won’t issue permits in advance of trips). A bit of a wait while the reservations expert was summoned. We chose our campsite, signed a permit, and heard the litany of park rules and “leave no trace” camping protocols.

Our plan was to start on beach then take Swan Cove Trail inland through the Refuge, with a return trip mostly on beach. We were greeted on beach with scuttling gulls, scurrying sand pipers, and an infrequent diving pelican. We then wound through diked Refuge roads closed to public vehicles, around inland ponds and forests. At the state line we hiked beach to the first nice bayside campsite 19 miles in—Green Run—and got into camp a bit after a beautiful sunset. (Park Service campsite maps showed mileage 15 miles to Green Run; less than our GPS showed and perhaps estimated for beach hiking rather than Refuge roads).

Next day we hiked to our water stash at Tingles Island and back, an 18-mile round trip. Morning increasing high tides (reaching 5-feet above sea level) forced us inland to follow primitive soft-sandy route along the low dunes. When we went to Tingles on the bay for our water drop, we apparently missed backpackers hiking the beach. Upon returning to camp, four other tents were up, and a group of young people gathered around a roaring fire. We greeted them and retreated to our space to make dinner. However, a nighttime mosquito assault (the first time we experienced insects on Assateague!) on the warm night soon drove me to join the group at the fire, which kept the beasts at bay. I don’t recall the conversation, but the group seemed delighted at their first visit to Assateague. A sudden thunderstorm chased us all back to our tents. Next morning, we departed before the others awoke, with more than 16 miles ahead.

From previous day, we realized that rising high tides peaking mid-day at nearly 5-feet above sea level would foil our plans to return on the Refuge beach; our mistake in not checking tide charts. From camp we continued south on an inland route, the remnant of Bayberry Drive. This was part of an ambitious 1960s Ocean Beach Corporation project which sold almost 6000 lots on the island but the first houses built were trashed by an “Ash Wednesday” storm that convinced authorities the area was too flood prone. (Other historic remnants include old duck hunting lodges on some of the bays.)

Near the state line we passed decaying remnants of the first houses trashed by the storm. The old road (mostly track through weeds but remnants of pavement in places) continued to the state line fence into Refuge. Where it connected to Refuge road to bay dikes, we noticed faint track still heading south into the Refuge (even though it did not show on GPS map). We followed it for about 5 miles behind the sand dunes, passing a pine plantation, and then hiking a dike road around large pond.

We then followed a route heading east to the ocean, where a fairly low tide allowed us to finish our trip hiking beach into our third glorious sunset.