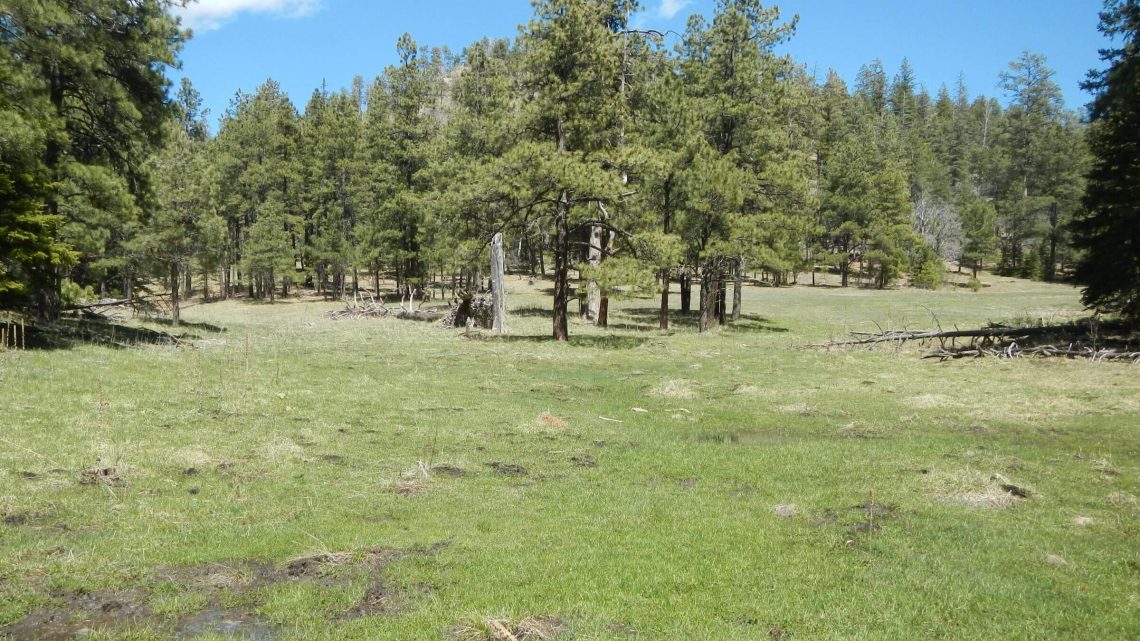 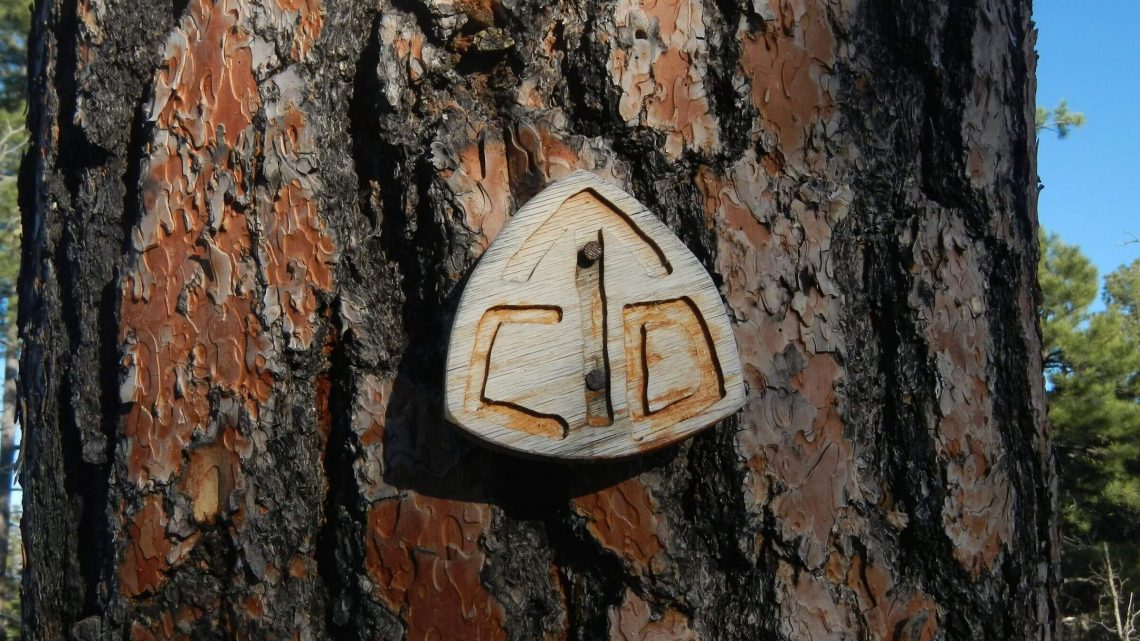 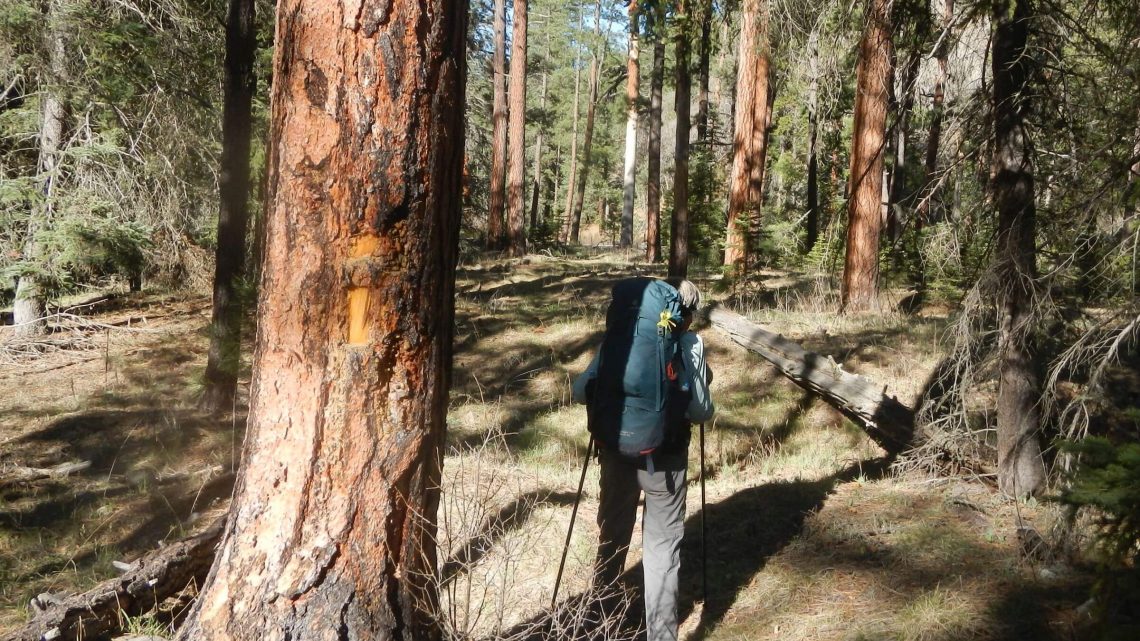 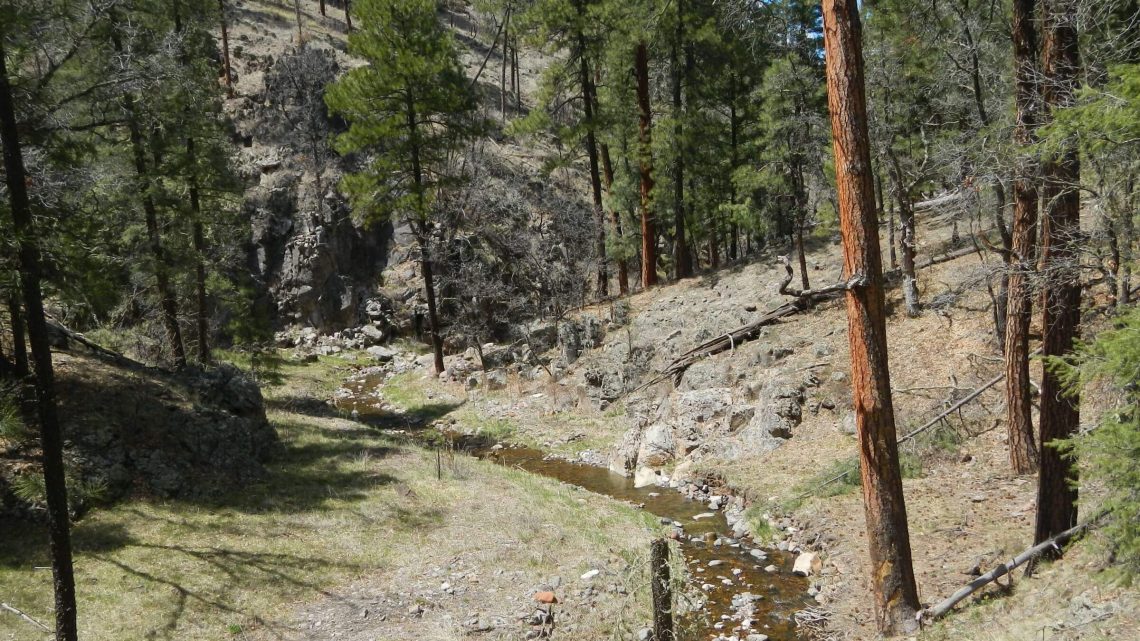 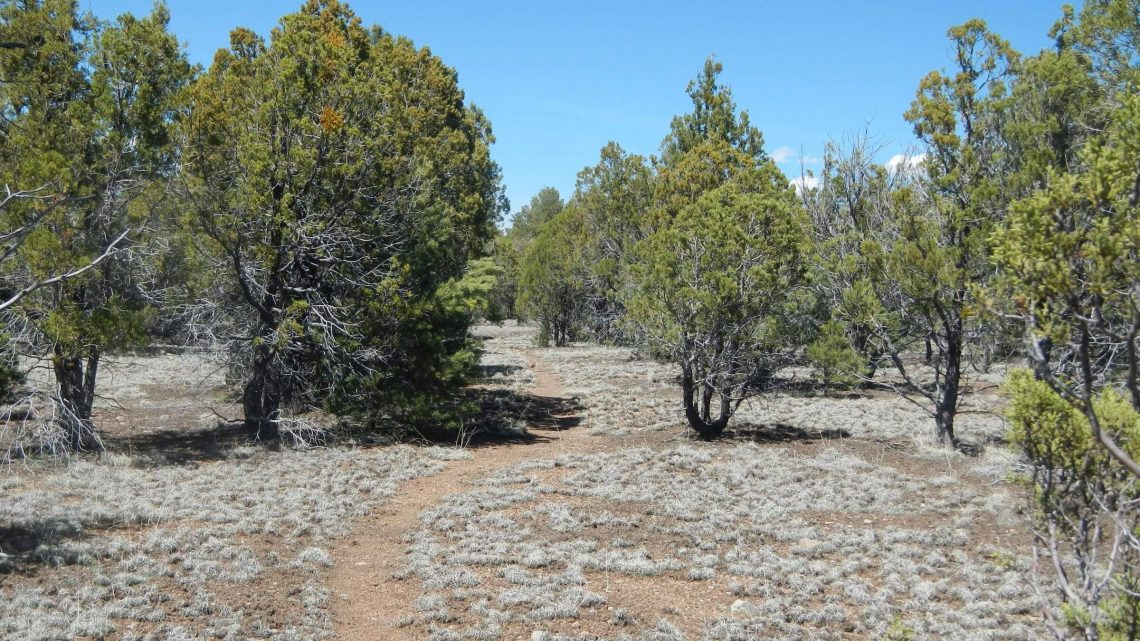 Aldo Leopold’s Burned Legacy: A Forgettable Hike in the Wilderness That Bears His Name

We had planned to revisit the Aldo Leopold Wilderness in southern New Mexico for years. Our first trip in late May 1982 whisked through the area on a loop encompassing part of the Black Range (on a short segment of the Continental Divide Trail), Gila River crossings and more time in the adjacent Gila Wilderness. It was too hot in the pinyon-juniper country and the higher elevation Mogollon Mountains were too snowy for pleasant passage.

I had always wanted to hike the Black Range Crest Trail from the south at Emory Pass Vista to the north end near Lookout Mountain. For some reason we did not do that in 1982. (I described what I remembered of this trip in Aldo Leopold Legacy blog.)

This year, David hoped to make this northbound trek but soon learned that the Silver Fire of 2013 had wiped out most of the southern leg of the crest trail. He designed a trip using only trails known to be recently cleared and avoiding areas affected by the worst recent fires. However, much older fires had decimated the Black Range Crest and conifer trees are not returning.

In fact, after two days of hiking badly burned ridges, and navigating through New Mexican locust, downed logs and a lot of bare slopes, I was ready to leave the high country.

The area was initially part of the Gila Wilderness named in 1924 by the Forest Service and included in the original Wilderness Act of 1964. In 1980, this section east of the national Forest Road 150 was made a separate wilderness to honor conservationist Aldo Leopold, who spent his early career in New Mexico and first suggested the Gila Wilderness.

The Aldo Leopold Wilderness was designated in 1980; big fires followed our 1982 visit. What little we remember no longer exists. And other than a little volunteer work, old trails are not being restored. Neither the Forest Service nor the Continental Divide Trail Association seem to have much interest in keeping trails on this high elevation ridge.

Although fire records before 2000 are difficult to obtain, local contacts say the area started burning more frequently in the 1980s. Over 10 more fires, including the 2013 Silver Fire (which burned almost 140,000 acres), have scorched the area since 2000. Fire effects definitely dominated our 2020 visit to the area.

Aldo Leopold Wilderness has been called the “wildest wilderness in New Mexico”—but this remote area along the crest of the Black Range likely gets few visitors because much is burned.
Frequent fires since the 1980s culminating in the large Silver Fire of 2013 have charred the 9000-foot elevation crest. Big down logs, treeless windy slopes, slippery contours, and biting New Mexican locust thorns have marred the legacy trail winding its way through stumps of mostly burned mixed-conifer forest. Much will be a dense aspen corridor but that is still a few decades away barring no more large fires or drastic climate changes.
The Continental Divide Trail (CDT) formerly followed the Black Range crest but some has been rerouted through canyons because of too many large fallen logs (with more ever falling) and exploding New Mexican locust. Most CDT thru-hikers now skip the Aldo due to poor trail conditions and lack of water, hiking the Gila Wilderness instead which also cuts off 80 miles.
Our April 2020 hike, our second visit in almost 40 years, started on Forest Road 150 to connect to the CDT on the Continental Divide, then followed the CDT reroute down Aspen Canyon and up Black Canyon to Black Range crest. Next, we went over Diamond Peak, leaving the CDT at South Fork Diamond Creek Trail and ending on an obscure but good trail over a pinyon-juniper mesa to Forest Road 150 that bisects Gila and Aldo Leopold wilderness areas.
A highlight was Reeds Meadow, an unburned area cloaked in forest and frequented by turkey and elk. Creeks were running well and wildflowers just starting at lower elevations; pockets of large fire-resistant ponderosa pine were a relief in the burned canyons.
Visit statistics: 7 days, 82 miles at 2 mph, and 450 feet per mile average elevation change; average pace was inflated by 9 miles of road hiking at the start of the trip and good Gila trail at the end—1.6 to 1.7 mph was our pace on Aldo Leopold trails.
See map below for detailed daily routes, mileages, elevation changes, and photos.

In 1982 we hiked what is now called the Continental Divide Trail (CDT) into the Aldo Leopold Wilderness starting from Lake Roberts.

On our 2020 trip we skipped the first 13 miles (in the Gila Wilderness), driving Forest Road 150 for a couple of hours to a trailhead between Diamond and Black Canyons where we planned to emerge. Leaving our vehicle, we hiked along the road a bit over nine miles back to Rocky Point to start our backpack on the CDT.

The CDT was quite nice for the first couple of miles, flanked by remnant pine and many logs cut out by chainsaw outside the wilderness boundary. Once into the wilderness, fewer logs were cut and the old trail contoured its way through barren slopes, with a steep rocky drop to a saddle. We were happy when the trail contoured side slopes in trees out of the howling April wind.

At heavily burned Signboard Saddle, a sign indicated a CDT reroute off the ridge (into Aspen Canyon) due to down trees and dangerous conditions.

After a windy camp below the saddle, we followed the reroute down the canyon. A couple of miles down, burn effects lessened and we were in nice pine groves or meadow most of the way to Black Canyon. Only a few trees had been sawed out; we soon learned why. A heavily loaded older fellow (with a female helper) said he was steward for this segment. A week ago he came in to clear the trail and his small dog ran away. He had focused on nothing else since.

Black Canyon was a wide piney flat at the confluence with Aspen Creek, but narrowed on the way up with increasingly deep creek crossings that led me to exchange boots for running shoes and slosh my way across them. Grass was clumpy, perhaps an effect of postfire flooding. We met the only other people of the trip—members of a turkey hunting party with a big base camp back at the confluence.

Midday on the third day we topped the crest at Reeds Meadow, a throwback to the old days: a mostly intact park flanked by ponderosa pine, spruce, and other conifers. We decided to stop for a couple of nights, dropping packs under spruce at the head of the meadow. That afternoon we followed a cleared trail up the meadow, east over the burned ridge, and down a steep eroded path to the burned saddle above Rattlesnake Canyon. The entire eastside watershed was burned bare.

The next day we hiked south on the crest to Reeds Peak. Leaving the meadow forest, we ascended on a wide trail through dense juvenile aspen that sprouted after a fire more than 20 years ago, then contoured around a burned slope to remnant mixed-conifer and a meadow. It was the old route of the “closed” CDT but was recently cleared with locust cut. (The CDT section from Signboard Saddle to Reeds Peak is on the Forest Service’s “not recommended” trails list but the CDT from Reeds Peak to Reeds Meadow is on the “trails cleared” list.) To our surprise, the old fire lookout and cabin on Reeds Peak were intact. Another highlight was wild turkeys in Reeds Meadow. I saw two hens and David a big tom with puffed-out tail feathers.

Beyond Reeds Meadow, the crest and the CDT were mostly barren, thorny, and not recently cleared of logs. I did not like the trail that streaked up Diamond Peak; we found no views on the unsightly summit overgrown with brush. Only foundation blocks of an old lookout remained. We dropped down the backside of the peak through a nice stretch of remnant old-growth trees, then followed switchbacks through dried ferns in a burned area that once contained Diamond Peak Spring.

Distracted by the masses of ferns draped over everything and a downed log, we missed our turnoff for South Diamond Creek Trail. We thought perhaps the trail had been rerouted from the four-way junction below, and headed down a nicely cleared trail (with aspen pruned to the roots). A quarter mile down, David called a halt. Wrong trail. The “Diamond” sign did omit “South” and we were clearly heading to the main channel of Diamond Creek.

We trudged back up the mountain and found the fallen, brush-obscured South Diamond sign exactly according to its correct GPS location! The trail was good from there onward, other than a very steep drop into the creek that I gladly would have missed.

We made camp at the confluence of Burnt and South Diamond Canyons in a remnant ponderosa stand. Just before, I startled an elk and saw a big brown rump bounding down the trail.

The next morning we hiked down a widened canyon on mellow trail through abundant old-growth ponderosa. Our only mishaps were boggy meadows and a few challenging creek crossings. The trail switch-backing out of the canyon towards Meown Hill was an excellent legacy trail reminiscent of pre-fire hiking. After the hill, a cut-off trail across a pinyon-juniper mesa was level and easy. A marked trail joined us from Black Canyon; David thought this might have been our route out of the wilderness in 1982.

Back at the vehicle, we drove north and hiked in on the Tom Moore Trail to camp in old-growth ponderosa pine in the Gila Wilderness. This canyon was also burned but much pine and grassy flats were left so hiking was fast and pleasant. We easily pulled off a 13-mile round trip morning to the end of the canyon the next day, passing old tanks and other water developments from past grazing. We saw no cattle anywhere.

We later learned the trail work we saw around Reeds Meadow was done by a university group that studies cougars. Interestingly, David saw cougar tracks on one of the cleared trails. We saw no thru-hikers on the CDT, only one “thru” bicyclist on his way to Canada riding FR-150 between the two wilderness areas. (The CDT offers parallel bike routes outside of wilderness and other sections not fit for mountain bikes.)